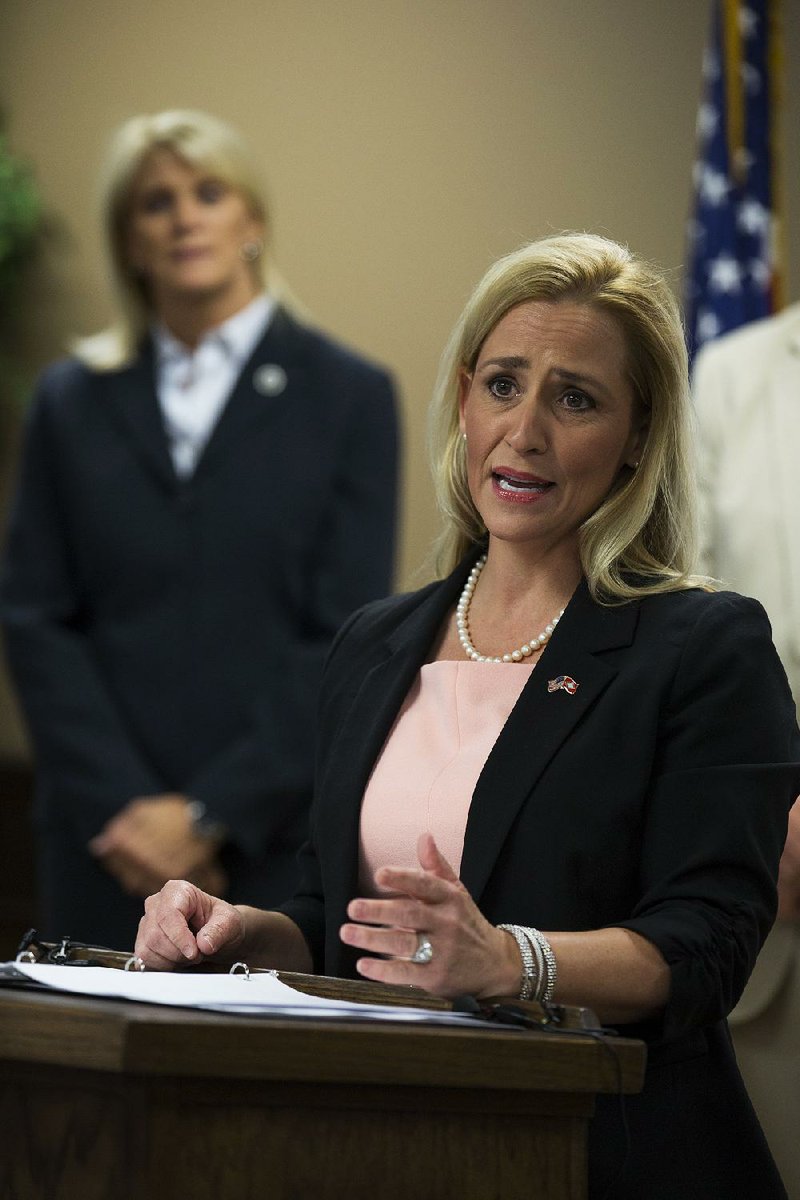 Arkansas Democrat-Gazette/MELISSA SUE GERRITS - 07/06/16 - Attorney General Leslie Rutledge speaks to media and other interested parties during a press conference July 6, 2016 to announce the creation of a new website to aid in Arkansas' missing persons search. Neverforgotten.ar.gov is a database that will include all missing persons from Arkansas and will be updated regularly.

The Arkansas attorney general is asking the U.S. Supreme Court to decide a question that has wound through state courts for more than a year.

In a petition filed Friday, Attorney General Leslie Rutledge's office asked the nation's highest court to "correct" an April 28 opinion by the Arkansas Supreme Court, which said crash report information must be revealed to the public.

The arguments center around the 1994 federal Driver's Privacy Protection Act, designed to withhold state motor vehicle division information, such as names and addresses, for public safety reasons, according to Friday's petition.

Congress intended the federal act to respond to a "growing threat from stalkers and criminals who could acquire personal information" from state motor vehicle records, the attorney general's petition on behalf of Arkansas State Police and agency spokesman Bill Sadler says.

But various states, including Arkansas, have different interpretations of how the federal law applies to state and local law enforcement agencies' crash reports.

Crash report information has been publicly available to any Arkansan for decades, including to lawyers who asked to inspect large numbers of the reports in person, usually in search of potential clients.

In early 2015, the Arkansas State Police changed that policy.

Citing a new state law that required redacting personal information about minors in crashes, the agency began redacting the same information regarding adults.

In the Arkansas Supreme Court opinion, Justice Robin Wynne wrote that no Arkansas case law controlled the question of whether crash records fall under federal protection.

But he said the court has "liberally" interpreted state public-records laws in favor of disclosure.

Wynne also wrote "it's clear that a vehicle accident report is not included in the definition of 'motor vehicle record'" in the federal law.

But Rutledge's petition says the federal driver-protection act restricts law enforcement agencies and state workers in how they can, and cannot, pass on motor-vehicle record information to other parties.

The list is limited to "a handful of specifically delineated" groups, such courts as law enforcement agencies, researchers and uses related to motor-vehicle operation or public safety, the petition said.

In Arkansas, most law enforcement officers get their crash report information directly from the Arkansas Office of Motor Vehicle, the petition said.

Some "99 percent of the time, information on the individuals involved [in a crash] is automatically incorporated in the report when a law enforcement officer swipes the magnetic strip on the back of a driver's license and that information is retrieved from the Arkansas Office of Motor Vehicles' electronic record database," the attorney general's petition said.

The case is worthy of review by the U.S. Supreme Court for reasons that go beyond the Arkansas high court's findings that Rutledge questions, the petition argued.

"Without this court's review, numerous state agencies, employees and others face potential liability and countless others will be deprived of several important protections in federal law," the petition said.

Some other states have public-records laws similar to Arkansas', the petition continues, and "government agencies in those states, their employees and others face the same issues presented by this case. As such, this matter presents the kind of important and recurring question that ought to be resolved by this court."