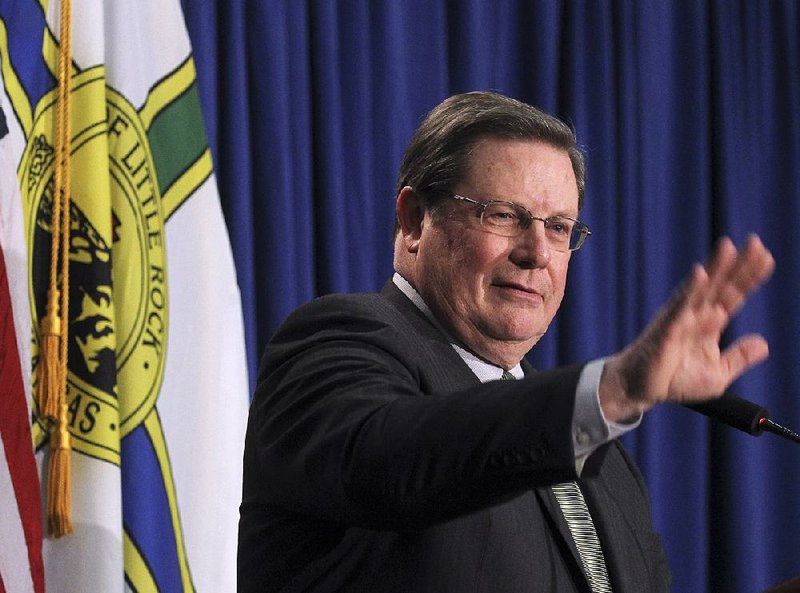 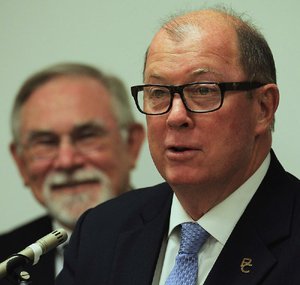 Moreover, Stodola said he will support what he describes as the "split diamond" alternative for the I-30 project, which includes eliminating the Cantrell Road/LaHarpe Boulevard interchange in downtown Little Rock, also known as the Second Street interchange, and the construction of a new interchange funneling traffic along Fourth and Sixth streets.

Why they support the lanes-limit waiver was outlined in a letter that Stodola sent Saturday to fellow members of the Metroplan board of directors. The board is scheduled to vote on the waiver at its regular monthly meeting Wednesday.

"Within the existing constraints, when taking into account improving safety, relieving congestion and improving functional and structural deficiencies on the roadway and interstate bridge, I believe the "Split Diamond" alternative is the best option available," Stodola wrote. Smith and Hyde "join me in recommending approval of the six-lane waiver as suggested by Metroplan staff."

The vote will come a week after the Metroplan staff recommended approving the waiver and a consulting body for the agency -- the Regional Planning Advisory Council -- recommended against granting the waiver. Neither recommendation is binding on the board.

Stodola, Smith and Hyde's support for the waiver likely will carry some weight with the board. The three are the top local-elected officials in the county where the 6.7-mile project -- for which the Highway Department has committed up to $630.7 million -- will have the most impact and has been the source of the most contention.

"I think it probably gives the board a sense of direction about the leadership of Pulaski County," Stodola said in an interview. "Barry, Joe and I discussed it and agreed this is the appropriate direction."

In an interview Saturday, Smith reiterated his support for the "split diamond" alternative and said it is the best option for central Arkansas.

He said officials received a lot of citizen input on the project, and he hopes the Metroplan board approves the waiver.

"I feel fairly confident that they will support us on this process," he said.

Kathy Wells, president of the Coalition of Little Rock Neighborhoods, opposes granting the waiver and said Saturday that she was disappointed to hear that the elected officials were not persuaded by the group's criticism of the proposal. She said the group plans to oppose the proposal going forward and will take legal action if it is fully approved.

"It would be the only tool left to us," she said of a possible lawsuit.

She said that while members of her group support fixing the I-30 bridge and ramps, the proposals process has been unfair, and the plan would burden the community with large future costs.

"This is poisonous," she said of the proposal. "It will not work. It will cost too much."

A split diamond interchange is a variation of the diamond interchange, which separates intersecting roads at congested urban and suburban intersections, according to the Federal Highway Administration. A spit diamond uses two one-way roads -- in this case, Fourth and Sixth streets -- to separate opposing directions of traffic, which the agency said "facilitates smoother traffic flows with less delay" and improves safety.

"There have been over 150 meetings with more than 1,700 attendees, as well as additional working group meetings and dialogue," the mayor wrote. "Importantly, some of the Little Rock entities most impacted by the I-30 Crossing project have publicly expressed their support for the 'Split Diamond' alternative.

He said the Highway Department and its consultants have worked to resolve the objections and concerns raised since the agency unveiled its latest design alternatives last fall, which provoked "contentious dialogue by several citizens."

"The City of Little Rock retained our own transportation consultants and over a dozen changes have been made," he said. "AHTD has not only listened, but has also basically moved a complete 180 degrees from the initial presentation last October."

The design he is supporting, Stodola added, will remove the Cantrell Road/LaHarpe interchange, leaving the downtown area with a "'Central Park' over 5 football fields long, (almost 18 acres) stretching from the doorstep of the Historic Arkansas Museum all the way to the Clinton Presidential Center grounds, a grand opportunity that will never present itself to the city again."

While critics have said the project provides no money to develop the park, Stodola said he already has received a $50,000 commitment from a family foundation that he didn't identify, "interest from other family foundations and other expressions of support for the ongoing maintenance of the park."

At the same time, eliminating that interchange will be a "very positive benefit to the Historic Arkansas Museum and the oldest buildings in our state, some harkening back to the 1820's when Arkansas was only a territory," Stodola wrote. "As you know, currently the entire volume of cars entering into this portion of the city use 2nd street which runs right through the middle of the museum complex or turns onto Cumberland intersecting the pedestrian heavy Markham street/Clinton Avenue intersection and on through to La Harpe Boulevard.

"While currently the plan anticipates 2nd street remaining open, this should greatly reduce the amount of traffic traveling through the Museum complex on 2nd street."

He said improvements to the design are largely the result of extensive meetings among city engineers, the city's own project consultant, Nelson Nygaard, and the Highway Department engineers and their consultants.

"I am satisfied that the extensive analysis and agreements reached between the parties have taken into account the impact of the 'Split Diamond' alternative on our local city streets and our overall street grid," he said.

All of those changes will be incorporated into a joint development agreement between the city and the Highway Department, Stodola added.

Stodola also credited local architect Tom Fennell's proposal to transform I-30 in the vicinity of downtown Little Rock into a boulevardlike thoroughfare as contributing to the latest alternative.

"This includes taking the through lanes below grade as a sunken freeway with vertical walls at Capitol and continuing to even grade at I-630 for the possible future development of a 'park cap,'" he wrote.

The changes that the city negotiated, the mayor said, also include "constructing the underpasses with sound barriers and solid face construction in order reduce noise and activate the freeway underpasses; reduced speed on the collector distributor (CD) lanes and treating the frontage roads as "boulevards" with speeds consistent with city streets."

He said the boulevard lanes will have "appropriately wide, tree-lined sidewalks and curbs, signals at the intersection and improving east-west connectivity through widening of the street overpasses with full-width sidewalks at 6th and 9th streets."

Stodola said the original boulevard concept, as envisioned by Fennell, was unpractical given that an independent consultant retained by Fennell allies, that supported the concept, said it would require construction of a new bridge in the vicinity of Chester Street for it to work.

That bridge would cost an estimated $80 million and require the acquisition of property through eminent domain, all without the resources of the Highway Department.

"You've got to be pragmatic at some point," Stodola said.