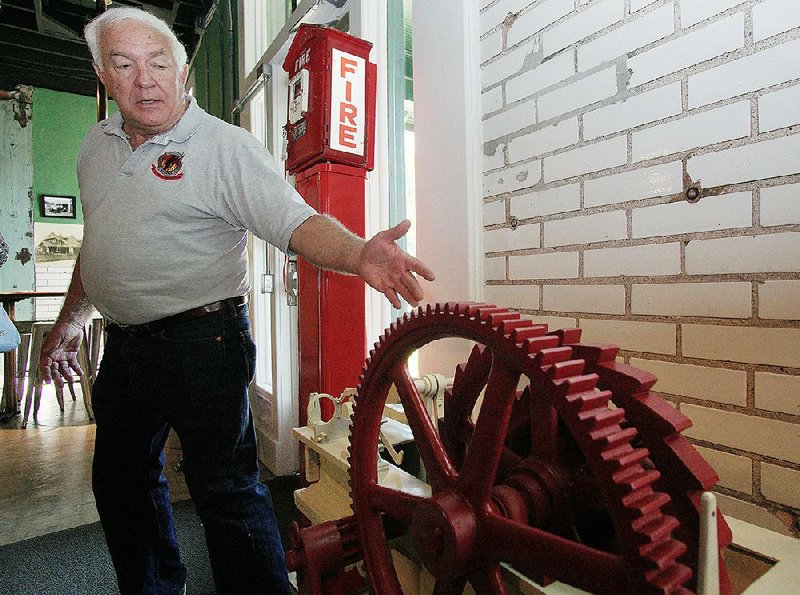 Museum Curator Johnny Reep talks Wednesday about some of the equipment at the newly opened Firehouse Hostel in Little Rock.

Ten years after the first announcement that a firehouse-themed hostel would open in Little Rock, the dream has finally become a reality. 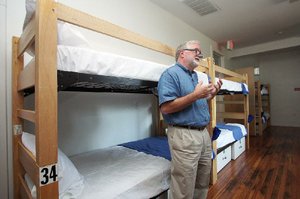 Guests can now book a bed at the city-owned, nonprofit-run Firehouse Hostel and Museum behind the Arkansas Arts Center in MacArthur Park.

The dorm-style lodging is geared toward those traveling through the city, particularly from out of the country, who need a cheap room for a few nights. The starting rate is $28 per bed per night.

Originally set for 2006, a "grand opening" weekend celebration is scheduled for Sept. 16 through Sept. 18. The hostel -- at 1201 Commerce St. -- first opened its doors Aug. 18 to a firefighter who donated some of the items displayed throughout the renovated 4,663-square-foot building.

The first official visitor came a few days later -- a man from Baltimore who found the venue through its listing on the Airbnb website.

While the city donated the use of the building -- a 1917 Craftsman-style structure that retired as a fire station in 1960 -- the nonprofit Hostelling Arkansas Inc. raised hundreds of thousands of dollars for renovation of the structure, which had fallen victim to a tornado and a fire over the years.

Greg Hart, president of the nonprofit's board of directors, was quoted in a 2006 article after the opening date was postponed for the first of many times.

"A project of this scope takes longer than what you would normally think," he said.

Hart didn't think at the time it would have taken another 10 years, but he said recently that the board is excited the venue is finally open and is excited about the tourism it could attract to Little Rock.

The downstairs of the building contains a museum -- with items donated by firefighters or collectors of items related to the trade -- as well as eating, lounging and work spaces. Black and white photos of historic fires in Little Rock and around the country decorate the walls.

Fire hose nozzles are displayed on a mantel in a sitting area. Nearby is a workstation with a re-purposed firehouse pole cut through the middle of the table.

Every piece seems to have a story, and Johnny Reep can tell a vivid tale of the history of each item and how it came to be donated to the museum. Reep is the hostel's museum curator. Many of the pieces came from his own collection. He's a retired Little Rock Fire Department captain.

"People have been real generous. We say to them, 'To collect is exciting, to own is powerful, but to share is priceless,'" Reep said during a recent tour through the hostel.

The piece he seems most excited about is a fire alarm system and gear box circa 1889.

The city's former museum curator came across an old newspaper article one day in 2003 detailing how the original system was located in the church tower of the Cathedral of St. Andrew, so Reep and others went to the church and asked for it. After conquering a set of "rickety wooden steps" and removing layers of dust, there was the system, fully intact.

With a key Reep keeps on a lanyard, the alarm can be triggered and guests can hear what the former fire alarm systems sound like.

A walk up 23 steps -- each marked with the name and address of a Little Rock fire station -- leads visitors to two dorm-style rooms with bunk beds, one room for women and one for men, each with their own multistall restrooms. The men's room is larger, with 14 twin-size beds, but the women have a larger bathroom. There are 12 beds in the women's room.

Downstairs there's a private family suite with four beds and its own bathroom, and a handicap-accessible co-ed dorm with six beds.

Guests have access to a kitchen, as well. Complimentary breakfast is served daily at two community tables made out of the original doors from the firehouse. The hostel also provides full laundry facilities, Internet and a public computer.

Hostelling Arkansas Inc. -- formed in the early 2000s -- raised more than $300,000 to renovate the fire station. The city has helped along the way, spending about $42,500 on paint, materials, labor and various items such as a refrigerator. Little Rock also contributed about $6,000 to match almost $12,000 in grants the hostel received.

The city and Hostelling Arkansas entered into a 50-year lease, with the option for either party to back out at year 25. They are on about year 10 of the agreement, under which the nonprofit doesn't pay rent for use of the building.

Hart has been with the project from the beginning. Part of the inspiration for a hostel in Little Rock came from Hart's experience staying in hostels in the 1970s, along with the experiences of Linda and John Fordyce, who came back in the 2000s from hostels overseas wanting to open up one in the city.

"In Arkansas, you don't get a chance like you do in the east and west coast to travel. ... This will be a wonderful opportunity for people from Arkansas to meet people from the rest of the world, because hostels attract so many people from all over," Hart said.

General Manager Jennifer Pierce said the Firehouse Hostel has already had inquiries from people in China and Russia.

"We've had hits from all over. This is a true attribute for the city," Pierce said.

The six-person staff is learning from the hostel's early visitors during the time they are calling the "soft opening" before the grand opening ceremony, Pierce said. And the hostel's board is planning a "Locals Only Sleepover Party" the Saturday of the grand opening weekend to encourage Little Rock residents to book a bed and see the hostel for themselves.

Rooms can be booked on the hostel's website, firehousehostel.org. Anyone wanting to tour the museum can set up a time with staff members beforehand by emailing firehousehostelgm@gmail.com.

The hostel is open 24 hours a day and seven days a week year-round. Guests get electronic card keys that allow them entry into the building and dorms.

When checking out of the hostel, guests may notice a large fire bell to their right. While station bells sounding off would normally mean something bad, the Firehouse Hostel and Museum hopes to give a new meaning to the sound with a new tradition:

If guests enjoyed their stay, they will ring the bell upon leaving.