VIDEO: Majestic Hotel demolition ahead of schedule in Hot Springs 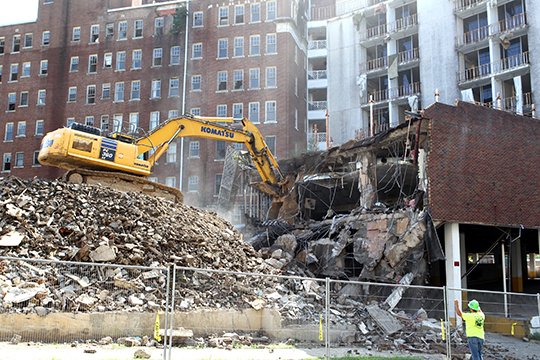 The Sentinel-Record/Richard Rasmussen BRICK BY BRICK: An hydraulic excavator tears down the north end of the parking deck under the Lanai Suites Monday. The city said demolition contractor DT Specialized Services Inc. is ahead of schedule and plans to begin tearing down the Lanai Suites next week.

HOT SPRINGS — Leaders in Hot Springs say the demolition of the Majestic Hotel complex is ahead of schedule.

On Monday, artisans removed part of the recessed tile fountain from the lobby of the hotel. Hot Springs Assistant City Manager Lance Spicer says the city hopes to salvage the fountain and other historic items from the hotel, which is being demolished after a fire in 2014.

Spicer tells The Sentinel-Record that demolition work is about two weeks ahead of schedule. Next week, the contractors will begin demolishing the Lanai Towers part of the complex.

City leaders have asked residents to avoid the demolition site downtown, calling it a public health hazard, but a live video stream of the project is available on the city's website.