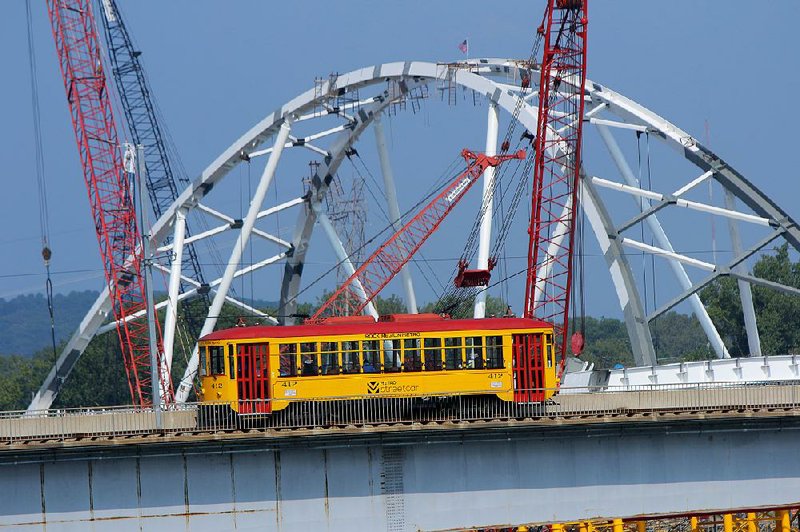 The River Rail trolley crosses the Main Street Bridge into North Little Rock on Tuesday beside the arches of the new Broadway Bridge.

Rock Region Metro streetcars won't operate during the morning and afternoon rush hours when the Broadway Bridge closes for up for six months.

Officials for the Pulaski County transit agency said Tuesday that they are acceding to a request from Little Rock and North Little Rock traffic engineers to not run the streetcars when traffic will be heaviest.

"We are trying to do everything we can to assist," Jarod Varner, the executive director for Rock Region, told the agency's board at its monthly meeting Tuesday.

The streetcars operate on tracks that cross the Main Street Bridge, which traffic engineers expect will draw many of the 25,000 motorists now using the Broadway Bridge once it closes Sept. 28. At that time, a contractor will begin removing the existing bridge and replacing it with a new one.

The streetcars use the Main Street bridge without impeding traffic, but the two routes on which they operate also are on parts of the streets that motorists use to access the bridge.

The streetcar operators are able to control traffic signals to stop traffic in all directions to allow the streetcars to safely go through intersections, which can cause traffic to back up at peak times.

The Arkansas Highway and Transportation Department announced last week that the 93-year-old Broadway Bridge would close to traffic at the end of next month.

The bridge is being replaced under a $98.4 million contract the department awarded to Massman Construction Co. of Kansas City, Mo., in September 2014. The company has been doing preliminary work in the river and on its banks, including construction of the new bridge's twin arches, which will be floated into place via barge and lowered atop the new bridge supports once the old bridge is removed.

Work to replace the bridge, which is on U.S. 70, began in 2011 after the department determined that all three of its components -- the superstructure, substructure and deck -- were rated as structurally deficient.

Though state highway officials say the bridge remains safe, it has been increasingly costly to maintain and, as a result, replacing it is more economical.

Varner said no firm times have been established for when the streetcar service would halt, but he expected it be roughly from 7 a.m. to 9 a.m. and from 3:30 p.m. to 6:30 p.m. during the weekday commutes.

Varner had offered to provide additional bus service during the time the bridge was closed, but with the caveat that the federal government, the state or the cities would pay for it.

"We want to do everything we can within our financial capabilities to try to alleviate what's going to go on when the bridge comes down," he said. "We don't have the funds to put in additional bus service, which is what is needed.

"It's absolutely something we wish we had the opportunity to do. But without funding from the feds, AHTD or the cities, we just can't come up with that type of financing."

More recently, he has offered to make the streetcars available to provide shuttle service limited primarily to the Main Street bridge, but the streetcar operators would need to have the authority to control the traffic signal at Washington Avenue in North Little Rock to make it work.

"It could be an opportunity," Varner said. "It's a tough sell to get people to drive 95 percent of the way there and then get out of their car to get a streetcar. That's less than a mile. But it's a tool we want the cities to know they have in their tool belt in case it's bad enough we need to do that."

The interruption of streetcar service comes as the agency reports a dramatic drop in streetcar ridership last month.

Rock Region Metro data showed that July ridership on the streetcar totaled 6,247, or a 45 percent drop from the 11,451 riders it reported in July 2015. That brought riders so far this year to 45,503, or 24 percent fewer than the 60,005 riders reported through the first seven months of last year.

The agency blamed Verizon Arena in North Little Rock and the Statehouse Convention Center in Little Rock for the "lower than normal seasonal ridership."

Both venues have been "very slow this summer," the agency said. "The streetcar depends on seasonal visitors and events for robust ridership."