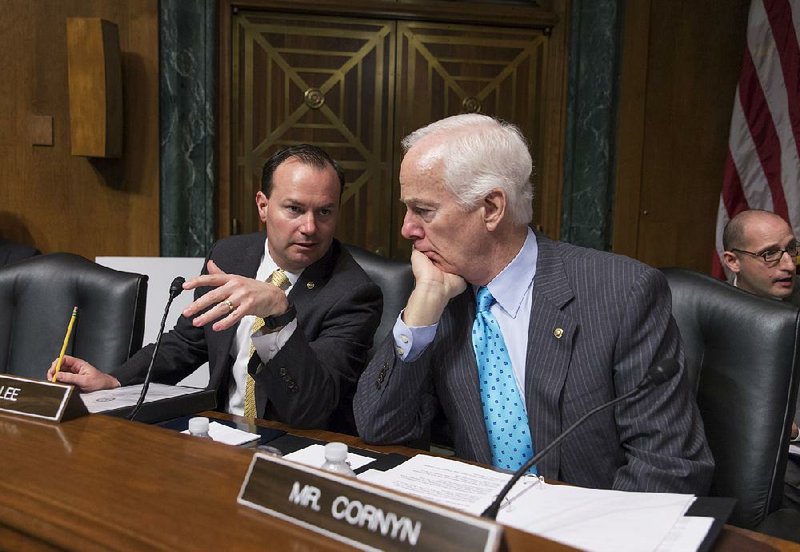 WASHINGTON -- Hopes for overhauling the nation's criminal justice system have faded in Congress this year, undercut by a spate of summer shootings involving police and the pressure of election-year politics.

Republicans, including Majority Whip John Cornyn of Texas and Utah Sen. Mike Lee, had joined forces with Democrats in hopes of revising the 1980s and '90s-era federal "tough on crime" laws by reducing some mandatory sentences for low-level drug offenders and giving judges greater discretion in sentencing. The goal is to reduce overcrowding in the nation's prisons and save taxpayer dollars.

The bipartisan group encountered fierce opposition from some Republicans who argue a policy overhaul could increase crime and pose a greater danger to law enforcement officers. Republican presidential nominee Donald Trump hasn't commented on the pending legislation but has dubbed himself the "law-and-order candidate" for what he calls a country in crisis, with terrorism in cities and attacks on police.

With Republicans deeply divided, one man could break the legislative deadlock: Senate Majority Leader Mitch McConnell, R-Ky., who has not indicated whether he supports the effort. McConnell so far has declined to put the legislation to vote, suggesting he doesn't want a messy intraparty fight before the November election.

Unlike McConnell, House Speaker Paul Ryan, R-Wis., strongly supports an overhaul and may bring up a series of bipartisan House bills in September to reduce mandatory sentences and boost rehabilitation programs.

An unusual coalition -- President Barack Obama, the American Civil Liberties Union and Koch Industries -- says the system is broken and supports changes. Obama has made it a priority in his last year in office.

But Ryan and Obama have a tough job in winning over McConnell, who must deal with opponents such as Sens. Tom Cotton of Arkansas, Ted Cruz of Texas and a handful of other Senate Republicans.

Supporters are also battling the calendar; Congress is only in session a few weeks before Obama leaves office. Democratic presidential nominee Hillary Clinton supports the effort, but if she wins, it's unclear whether there would be momentum for the overhaul in her first year in office.

Cotton calls the Senate bill "a dangerous experiment in criminal leniency" that would let violent criminals out of prison.

Supporters say the legislation would do the opposite, making communities safer by focusing on rehabilitation and preserving police resources. Mark Holden of Koch Industries, which has backed the Senate and House bills, points to states that have successfully put similar policies in place.

Proponents argue that there's no direct connection between the overhaul and this summer's shootings of black men in Minneapolis and Baton Rouge -- or the shooting of police officers in Dallas and Baton Rouge -- since the measures would primarily deal with incarceration of low-level drug offenders and rehabilitation programs. Opponents counter that reducing mandatory minimum sentences could further endanger law enforcement officers.

"If you talk to actual officers on the street, almost all of them will tell you their job has gotten more dangerous," said the Hudson Institute's John Walters, who was the director of the White House Office of National Drug Control Policy under President George W. Bush. "The current debate about this isn't going to give them a voice."

The House Judiciary Committee is looking at separate action on policing and has created a bipartisan working group on police accountability and aggression toward law enforcement. After meetings in Detroit on Tuesday, Chairman Bob Goodlatte, R-Va., predicted criminal justice overhaul will eventually pass.

On policing, Goodlatte said mistrust between law enforcement agencies and the communities will not be solved overnight. "However, this should not deter us from devoting urgent attention to this matter of national importance," he said.

Republicans who back criminal justice overhaul point to the support of several law enforcement groups and say they are working the party's grass-roots, bringing the message that changes could save billions of federal dollars and help criminals from returning to prison.

"There's no question that it's very hard to draw the lines on the conservative movement and where people are on this," said Republican Ken Cuccinelli, the former Virginia attorney general who is working with a group called Right on Crime.

At the heart of the Republican debate on the issue is a philosophical difference between advocates who say rehabilitation and shorter sentences could lower recidivism and opponents who say it will let criminals out and not do enough to stem crime. Advocates point to a dip in overall crime in the U.S., while opponents point to rising crime in some major cities.

The Senate bill was introduced in October, and Cornyn and other supporters revised it this spring to try to win over reluctant GOP colleagues. But Cornyn acknowledged in July that the House would have to move first on its legislation, which is similar but not identical to the Senate bill.

Information for this article was contributed by Jeff Karoub of The Associated Press.