EU to Apple: Remit $15B in back taxes 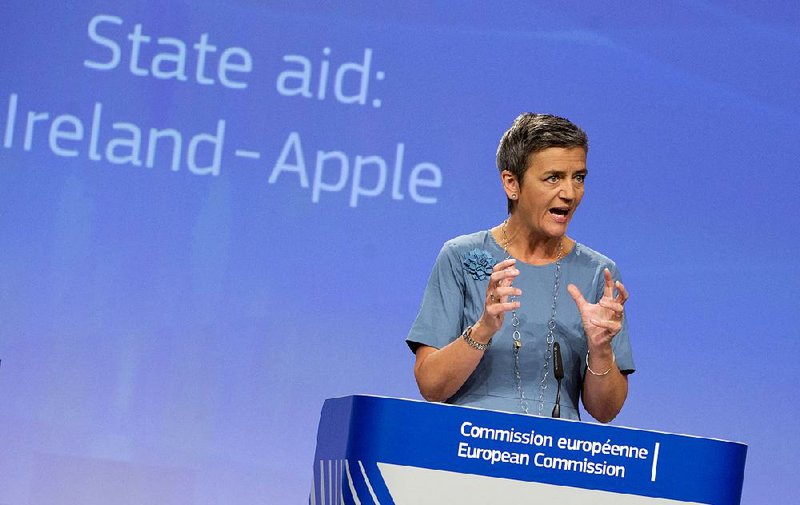 BRUSSELS -- The European Union on Tuesday ordered Apple Inc. to pay nearly $15 billion in back taxes to Ireland, plus billions more in interest.

The ruling is an escalation by the EU in its battle to have multinational corporations pay taxes in the region. Concern about corporate tax payment has grown in the EU after years of financial crises and tight budgets. The ruling also risks tension with the United States, which argues that the EU is picking on American companies and depriving it of potential tax windfalls of its own.

At the heart of the matter is the EU's claim that many multinationals -- including Amazon and McDonald's -- struck deals with EU countries to pay low tax rates in exchange for basing their EU operations there.

EU Competition Commissioner Margrethe Vestager said a three-year investigation found that Ireland granted tax breaks to Apple that lowered the effective corporate tax rate on its European profits from 1 percent in 2003 to 0.005 percent in 2014.

That last tax rate meant that for each $1.1 million in profits, Apple paid $55.72 in taxes, Vestager said Tuesday at a news conference.

U.S. officials have warned that the EU's executive commission is overstepping its power given that taxes are typically left to national governments to oversee and that European officials should not retroactively issue penalties in tax rulings. They also emphasized that such cases undermine continuing efforts to overhaul global policies and create measures to curtail tax avoidance.

"U.S. companies are the grandmasters of tax avoidance," said Edward Kleinbard, a professor at the Gould School of Law at the University of Southern California and a former chief of staff to the congressional Joint Committee on Taxation.

"Nevertheless, because of the nature of U.S. politics," he said, the Apple case "will be framed by the U.S. as Europe overreaching and discriminating against 'our team.'"

For Ireland, a country of barely 4.6 million people, the sum to be recovered would equal about $3,150 for every man, woman and child.

The Irish government said it would appeal the decision, arguing that it had granted no favorable treatment to Apple.

Ireland has for years offered low corporate tax rates to multinationals, a common strategy among Europe's smaller nations, including Luxembourg and the Netherlands.

Because the countries are small, they gain from even small amounts of tax on multinationals' huge revenue. They also benefit from the jobs created locally. Apple has 5,500 workers in Ireland, making it one of the biggest private-sector employers.

The Irish government insisted that Apple had paid its full amount of tax and that no state aid was provided.

"It is important that we send a strong message that Ireland remains an attractive and stable location of choice for long-term substantive investment," said Irish Finance Minister Michael Noonan. "Apple has been in Ireland since the 1980s and employs thousands of people in Cork."

Apple likewise claimed that it had followed the law and paid every cent of what it owed.

"The most profound and harmful effect of this ruling will be on investment and job creation in Europe," Apple Chief Executive Officer Tim Cook said in a letter published on the company's website.

"Every company in Ireland and across Europe is suddenly at risk of being subjected to taxes under laws that never existed."

Luca Maestri, Apple's chief financial officer, accused the EU of using a "completely made-up number" and said there was "no special deal" from Ireland.

The European Commission denied Cook's claim, saying it is relying on a history of using state-aid rules related to corporate tax issues.

"No rules have been changed -- not one rule," the EU's Vestager said at the news conference. "This is a question of paying unpaid taxes."

Apple and Irish government officials said they would challenge the EU action in the European courts and predicted that they would be vindicated.

Apple shares fell 82 cents to close Tuesday at $106 in New York, a modest drop that reflects expectations that Apple can afford the settlement, should it stand. Apple made $10.5 billion in the first three months of this year.

The EU ruling raises the difficult question of how to fairly tax multinationals -- in their home countries, where the bulk of their goods are developed, or in the countries where the goods are sold.

Currently, the setup allows Apple to record in Ireland all of its sales across the EU's 28 nations and 500 million consumers.

That internal company practice, as well as two favorable Irish tax rulings in 1991 and 2007, "enabled Apple to avoid taxation on almost all profits generated by the sale of Apple products in the entire EU single market," according to the European Commission.

The critics of the EU's campaign against tax avoidance argue that its latest ruling tramples on the sovereignty of a country and its elected government.

Apple accused the EU executive body of engaging in efforts "to rewrite Apple's history in Europe, ignore Ireland's tax laws and upend the international tax system in the process."

Some analysts say that with the EU reeling from Britain's decision to leave to bloc, the last thing it needs is more uncertainty for businesses. Supporters say the ruling is a step forward in harmonizing tax laws between EU countries.

Either way, the EU's move risks fueling tensions with the U.S., which complains that it is singling out American companies.

"They're going after Apple, which means a big name and big dollars," said Brad Badertscher, a corporate tax expert at the University of Notre Dame's Mendoza College of Business. "It's a big shot across the pond to U.S. companies."

As of June, Apple had more than $200 billion stashed outside the U.S. The U.S. government cannot tax any of that money unless it is repatriated.

The U.S. Treasury Department said it was disappointed by the EU's decision, saying retroactive tax assessments by the EU Commission "are unfair, contrary to well-established legal principles and call into question the tax rules" of the individual countries in the EU.

At stake for the Treasury is some of the potential tax revenue on more than $2 trillion in profit that U.S. multinationals have parked overseas. While the EU isn't directly targeting that cash hoard, new tax cases filed by the EU could significantly reduce the revenue that the U.S. government could collect from it.

The U.S. tax code, which sets a top corporate income tax rate of 35 percent, allows companies to defer paying that tax on their foreign income until they decide to bring it home via "repatriation." Over the past few years, the U.S. Congress and President Barack Obama's administration have been unable to agree on a plan to induce companies to repatriate their earnings at a reduced tax rate. Obama has proposed 14 percent; House Republicans this year proposed 8.75 percent.

The EU decision will require the Irish tax collection agency to demand a payment soon from Apple, Vale said. Any money will be placed in a hands-off escrow account pending what could be years of litigation before the European Court of Justice in Luxembourg, he said.

Information for this article was contributed by John-Thor Dahlburg, Shawn Pogatchnik and Brandon Bailey of The Associated Press; by Dara Doyle, Stephanie Bodoni, David Kocieniewski and Lynnley Browning of Bloomberg News; and by James Kanter and Mark Scott of The New York Times.

Print Headline: EU to Apple: Remit $15B in back taxes