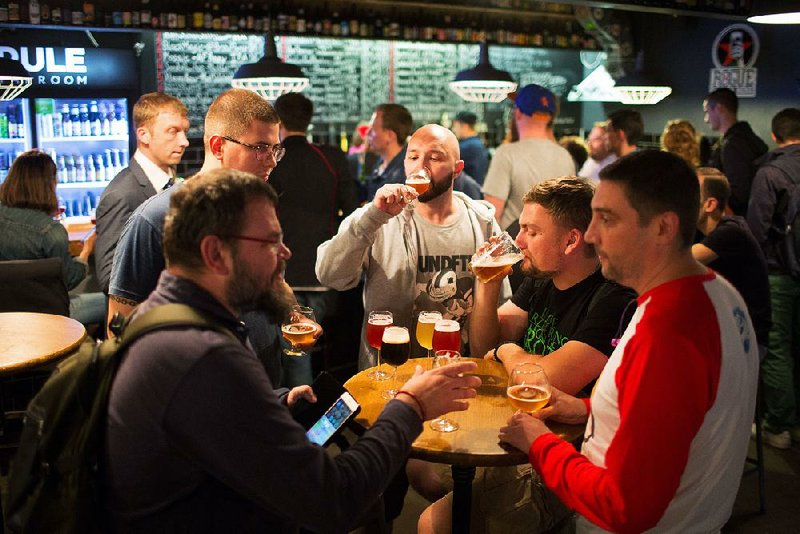 Customers talk and drink craft beer inside the Rule Taproom bar in Moscow in September.

A staple drink of Russia's recession comes in different flavors, but it's best consumed standing up. Food is optional.

Not a beer country until the arrival a decade ago of a central European tradition of sit-down bars that married brews with hearty meals, Russia is now reveling in the new craft labels that have exploded in popularity during the nation's longest recession this century.

The number of Russian microbreweries soared tenfold in the past five years, and almost all of Moscow's 100 or so watering holes serving craft beer opened in the past two years after the ruble's crash left some local brews costing less than half the price for imported beer.

"It's a relatively inexpensive luxury," said Douglas Zent, a Texan who's been the financial muscle behind Moscow Region-based Victory Art Brew.

While the craft beer revolution may have been decades late to touch down in Russia, it's caught on as inflation and a currency crisis gutted salaries, forcing people to make do with less.

The new names on offer are taking off not just by appealing to the palate but also by sparing the wallet. What's more, the dives serve up craft beer as part of a more spartan setup where food is often an afterthought, an inviting option in the age of thrift as Russians navigate the ordeal of recession.

The Indian pale ales and imperial stouts offered across the capital -- at bars that sometimes feature hundreds of varieties on tap and bottled -- are helping Muscovites stretch the ruble that's lost almost half its value against the dollar since the start of 2014 as oil prices nose-dived.

Craft beer finally clicked with younger Russians even as an estimated 14 million people crashed out of the middle class in the past two years and many increasingly skimp on even basic necessities such as medicines.

It's also a challenge for the biggest foreign brewers, their dominance already eroded by competition. As the beer market shrank by a third since 2008 because of more stringent regulations and falling incomes, the share of Anheuser-Busch InBev NV, Carlsberg A/S, Heineken NV and Anadolu Efes has been on the decline.

The top four producers controlled less than 72 percent of the market in the first nine months of 2016, falling by 14 percentage points in the past seven years, according to research company Nielsen. They've responded to the emergence of craft beer with similar varieties of their own.

While costlier than the standard supermarket fare, craft brands are still a budget option compared with the imported labels on offer at more traditional bars or restaurants, according to Andrey Serganov. His BeerMarket is part of the so-called beer triangle in downtown Moscow, its courtyard thronged by locals knocking back pints, a scene eerily similar to London.

"If you've tried craft, you'll never go back to lager," said Anton Evdokimov, owner of the Bottle, Mug and Boiler pub in downtown Moscow. "People try Indian pale ale, and the way they think about beer changes straight away. Then they want something new, they like to experiment, play with tastes."

Unlike the traditional haunts of the older generation, where sausages inevitably accompanied the bland lagers, Zent says Victory Art Brew caters to a younger clientele, cultivating a taste for a grapefruit IPA and chocolate-flavored stout, with sour beer the biggest hit with the in-crowd last summer. The ruble's collapse helped local brews carve out a niche, according to Evdokimov, whose bar opened in July 2015 and proceeded to thrive through the recession.

"The premiumization and craft trends seem to be able to withstand a mild recession," said Francois Sonneville, a beverage analyst at Rabobank. "This can either be caused by spending less on large ticket items, such as a holiday, but more on day-to-day items such as food or drinks, but it could also be that the amount spent on beer doesn't change very much, just that consumers drink 'less but better.'"

The arrival of global brewers a decade ago toppled vodka as the undisputed national drink, according to Vadim Drobiz, head of Russian alcohol-market researcher Cifrra. And even as beer consumption dropped since peaking in 2007, it remains at four times its level in 1995 while the share of hard liquors has barely changed, he said by phone.

"In recession, people like to drink -- and to drink the good stuff," Drobiz said. "The last things people refrain from are alcohol and tobacco."

Consumer spending has been crumbling at a pace unprecedented under President Vladimir Putin as wages fail to keep up with the surging cost of living.

Forgoing goods and services has been the primary way of adapting to the hardships, according to a recent study compiled by an institute at the Russian Presidential Academy of National Economy and Public Administration. The survey also showed that three-quarters of Russians believe they've been affected by the crisis.

The boom for craft brands has bucked a wider downturn in the beer market even as their share is still at no more than 2 percent. The biggest foreign brewers face little choice but to try to keep up and seize the trend.

"The first results from sales were very encouraging," said Konstantin Tamirov, head of marketing at AB InBev's Russian unit. "We hope that we'll be able to become drivers in craft beer and significantly increase output over the next few years."