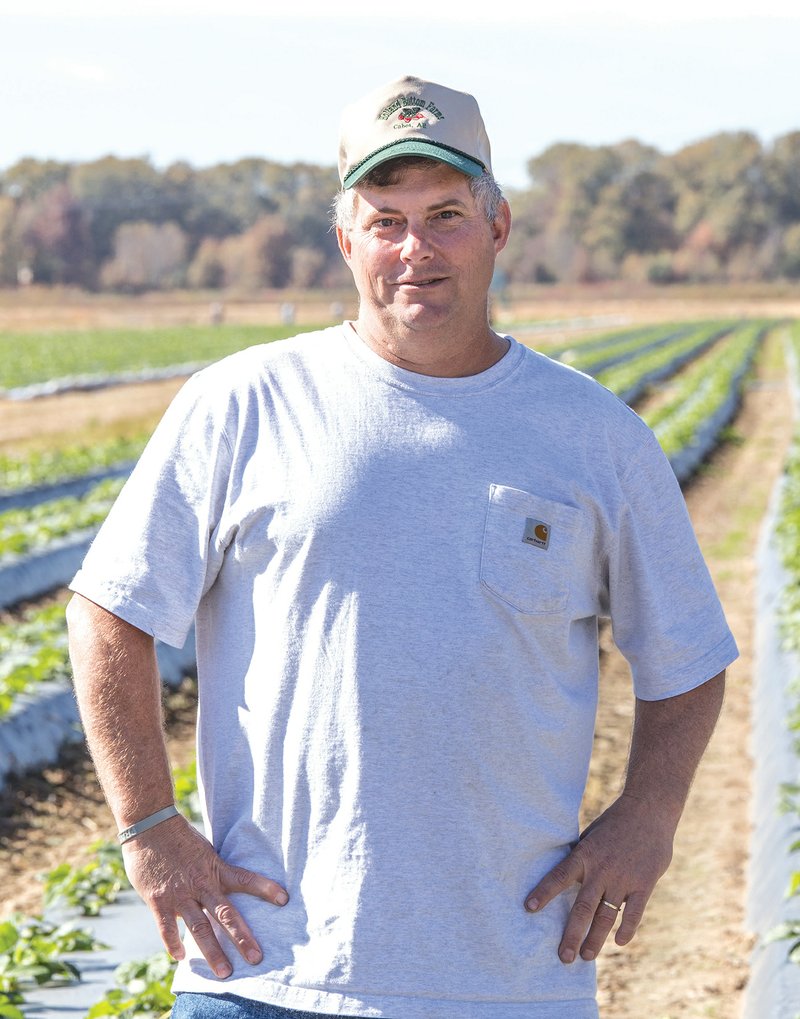 Tim Odom stands in the strawberry fields of Holland Bottom Farm LLC. Odom took over the farm after his father, Larry Odom, died last year. Strawberries are the most popular crop, Tim said, and they are going to take a lot of care before the harvest next spring.

Driving through Cabot on Bill Foster Memorial Highway, it’s impossible to miss the fields and produce stand of Holland Bottom Farm LLC. The farm has been a Cabot institution since it started in 1982, when Larry Odom began growing strawberries as a U-Pick operation. Now Larry’s son Tim runs the family business.

“I grew up here in Cabot all my life,” Tim Odom said. “My grandpa had this farm here beside us, so three generations have farmed this land.”

Odom said he started working on the farm at a young age.

“My first job that I can remember was hoeing in the watermelon patch when I was 6 years old and chunking watermelons that summer,” he said. “If the watermelon wasn’t too big and I could carry it, I was doing it.”

Odom has three brothers, but he said he was the main sibling to hit the fields and work with his dad.

“It takes a lot of imagination, I would say, to keep from getting bored sometimes,” he said. “I remember when I was little, my grandpa and I would plant beans. We used to have stumps out in this field, and my grandpa would say, ‘We’ll be over to that stump by 1 [o’clock].’ And 99 percent of the time, he’d be right on the money.”

After Odom graduated from Cabot High School in 1987, he joined the Navy, where he served on the USS Wisconsin for three years, including six months in the Persian Gulf.

“You learn that we have it great over here in this country,” he said. “Going to Third World countries — like in the Persian Gulf — you see that life’s a bed of roses here compared to a lot of people. We’re very fortunate to live here, so it was a positive outlook on my part. The worst day I’ve got here is a great day.”

When he finished his time with the Navy, he came back home and started right back on the farm.

“Everybody loves the strawberries,” Odom said. “I just hope I can keep it going.”

After starting as a U-pick operation, Holland Bottom changed course in 1996 and started selling pre-picked berries. Strawberry season normally begins around the first of April and lasts until June 1, with a plentiful bounty around Mother’s Day. The berries are already in the ground getting ready for next spring, and Odom said he’s going to keep an eye on them throughout the winter to make sure they are thriving and safe.

In May 2015, Larry Odom was diagnosed with a rare form of brain cancer. He died in November of that year and left the farm to Tim.

“My father passed away on Nov. 3 last year,” Odom said. “He’s had the produce stand for about the past 10 years, so people haven’t really seen me because he was at the stand, and I was out in the field doing work. They probably still won’t see me at the produce stand because I’ll still be out doing the work.”

Looking back over the years, Odom said, he isn’t shocked that he stayed in the family business.

“The way things were in the Navy, I got out after three years and came back here,” he said. “I’ve had to do a lot of jobs as a farmer, and some of it isn’t pleasant. It’s what being a farmer is all about. … It’s never a dull moment, I don’t reckon. You have to be a plumber, mechanic, everything else on a farm.”

Odom’s father was also a justice of the peace in the Lonoke County Quorum Court, and when he died, his son took his place.

“I’m finishing his term, and December will be my last meeting,” Odom said. “As far as doing more in politics, I probably won’t — not as long as I’m farming. What he and I did was more than a two-man show on the farm, and we worked ourselves to death. Now, I’m a one-man-show, so maybe I’ll get into all of that later, but right now it’s a ‘no.’”

Along with keeping the berries and other produce growing, Odom said, he’s got ideas for new ventures for Holland Bottom.

“We got a nursery license this year, so we might try to grow some trees to sell,” Odom said. “We’ve got it in case we decide to go that way. I may bring some landscaping rocks and sell them out here. It’s something to think about.”

Odom said his wife, Leslie, has been a big help on the farm, and he looks forward to the future of Holland Bottom.

“It’s been a long year,” Odom said. “My father passed away, and then I had a cousin pass away, and my mother just passed away. And you have to keep everything running,” he said. “Everything keeps growing, so you don’t get a break during the growing season.”