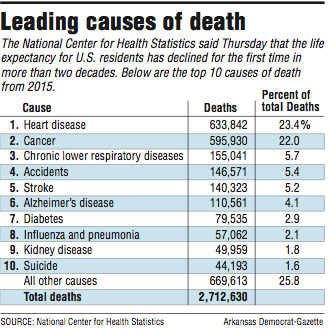 Information about the Leading causes of death in the U.S.

A person born last year in the United States is expected to die at an earlier age than someone born in 2014, according to a report published Thursday that marks the first time in 22 years that U.S. life expectancy has declined.

Life expectancy at birth was 78.8 years for the total U.S. population last year, down about 36 days from the 78.9-year life expectancy in 2014, the federal National Center for Health Statistics said in its annual mortality report.

"When you put it across the whole United States population, that's a lot of time," Joseph Thompson, the director of the Arkansas Center for Health Improvement, said of the shorter expected life spans.

Although 2015 figures weren't available for each state, Arkansas typically ranks near the bottom in the United States in life expectancy and below the national average.

Last year's decline, despite a drop in the cancer-related death rate, was attributed to higher rates of mortality associated with heart disease, diabetes, stroke, Alzheimer's disease, accidents and other leading causes of death in the U.S.

Dr. Gary Wheeler, the Arkansas Department of Health's chief medical officer, said medical professionals have long expected a decline in life expectancy in view of higher rates of underlying factors that put people at risk of early death. Wheeler called the findings a "disappointment" and said it will take policy changes and behavioral shifts to extend life spans.

"With the rising rate of obesity, diabetes, hypertension and continued use of tobacco products, we predicted at least a decade or two ago we would at some point see the reduction in life expectancy, and we have finally achieved it," Wheeler said. "I think the bottom line is that we have through our own behavior put ourselves in this spot. This is one of those things we expected to occur, and now we're seeing it, so it's time to get busy."

In 2009, the 76-year expected life span at birth for Arkansans ranked 45th among other states and the District of Columbia, ahead of Kentucky, Oklahoma, Louisiana, Alabama, West Virginia and Mississippi, according to the most recent data compiled by the Henry J. Kaiser Family Foundation.

For that year, eleven states' life expectancy was higher than 80 years, with Hawaii at 81.3 and Minnesota at 81.1 leading the way.

In Arkansas, obesity, diabetes and hypertension rates among adults put it among the seven bottom-ranking states, according to a report by the Trust for America's Health and the Robert Wood Johnson Foundation.

Wheeler said obesity is the "probably the single most important issue" to address to lengthen life spans, but said that it's also the most difficult.

"This requires changes in each individual's behavior," he said.

Local governments can install more sidewalks as a way to encourage exercise, Wheeler said, noting that employers are increasingly offering incentives to employees to reward better health. The state could lower its cancer rate by increasing the tobacco tax and designating more areas off-limits for smoking, Wheeler said.

Thompson of the Arkansas Center for Health Improvement, an independent health policy center, said he hopes a "much broader, societal recognition [of] the need for the health choice to be the easy choice" will follow the findings.

For example, Thompson said people should consider well-being when deciding what snacks to stock in a vending machine, whether to take the stairs or elevator, and what to cook for family dinner.

Other big-picture factors contributing to a population's average life span include access to medical care and cost of prescription medication, Wheeler said.

Thompson said he would like to see analysis of life expectancy in states that expanded Medicaid under the 2010 Patient Protection and Affordable Care Act to help low-income residents obtain health insurance. More than 300,000 Arkansans gained health insurance under the expansion.

"I think this provokes a question for policymakers and the National Center for Health Statistics to analyze life expectancy in expansion states vs. nonexpansion states," Thompson said.

"I think some of the early signs that we might see an improvement in mortality going forward are present," Wheeler said. "It's still going to take a long time and a lot of work."

More than 40 nations have a higher life expectancy than the United States, according to the World Bank Group. It is highest in Japan and Hong Kong at 84.

Experts who cautioned against interpreting too much from a single year of data said the numbers could reverse themselves next year.

"This is unusual, and we don't know what happened," said Jiaquan Xu, an epidemiologist and lead author of the study released Thursday. "So many leading causes of death increased."

More than 2.7 million deaths were counted in 2015, with mortality rates increasing for eight of the nation's 10 leading causes of death: heart disease, lower respiratory diseases, unintentional injuries, stroke, Alzheimer's disease, diabetes, kidney disease and suicide. The rate for cancer fell, and the influenza and pneumonia death rate was stable.

"We're seeing the ramifications of the increase in obesity," said Tom Frieden, director of the federal Centers for Disease Control and Prevention. "And we're seeing that in an increase in heart disease."

The largest increase in death rates per cause were in Alzheimer's disease, as baby boomers age, and in accidents, which include drug overdoses.

The new life-span projection also could be amended. Initial data from 2014 found the average life expectancy was 78.8; it was revised upward to 78.9 on the basis of new Medicare data, according to the Thursday's report.

But a longer-term trend of no growth has some experts concerned. In 2012, life expectancy reached a then-record high of 78.8. It has remained mostly flat before an uptick in 2014 and a slip the next year.

"With four years, you're starting to see some indication of something a little more ominous," said S. Jay Olshansky, a University of Illinois-Chicago public-health researcher.

Information for this article was contributed by The Associated Press and the Washington Post.

Print Headline: Life expectancy dips in U.S. in '15 for first time since '93