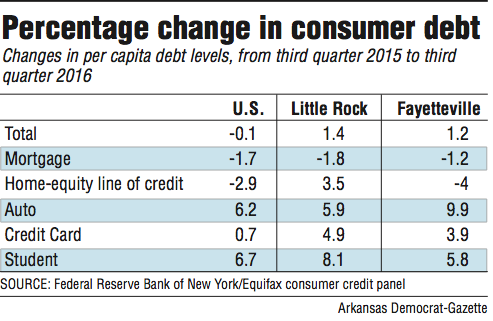 Information about Percentage change in consumer debt in the U.S and Arkansas

The Little Rock metropolitan area recorded the biggest increase in consumer debt in the third quarter compared with metropolitan areas in a seven-state region, according to a report by the Federal Reserve Bank of St. Louis.

"Across the [four largest metropolitan areas in the district], total per capita debt changed by less than a percent, with the exception of a 1.4 increase in Little Rock," the report said.

The St. Louis Federal Reserve district includes all of Arkansas and parts of Illinois, Indiana, Kentucky, Mississippi, Missouri and Tennessee.

Consumer debt can be tricky to interpret, said Marc Fusaro, director of the business and economic development center at Emporia State University in Emporia, Kan. Fusaro was an associate professor at Arkansas Tech for seven years before moving to Emporia State this year.

Not all debt is bad, said Lowell Ricketts, a senior analyst at the Center for Household Financial Stability at the St. Louis Fed.

"It's certainly constructive to be able to leverage it to make large purchases, such as a home or investing in education, which you couldn't do without leveraging liability," Ricketts said.

Only considering the percent changes in debt makes it difficult to determine how large the numbers are, said Michael Pakko, chief economist at the Institute for Economic Advancement at the University of Arkansas at Little Rock.

"The changes in the past year seem to be pretty insignificant compared with the big swings that we saw over the recession and recovery," Pakko said. "So putting that in context, my sense is that the magnitude of these numbers doesn't indicate any big swings that are unexpected."

It isn't unexpected that Little Rock and Fayetteville had different trends in home-equity lines of credit, Pakko said.

"Fayetteville did experience a big crash in real estate prices [in the recession] and is seeing those prices climb back up again," Pakko said. "That reduces the attractiveness of borrowing against your home equity if you have suffered a loss in the equity value in your home. We didn't see so much of that [equity loss] in Little Rock."

Mortgage debt was down in Little Rock and Fayetteville, by 1.8 percent and 1.2 percent, respectively.

The decline in mortgage debt could be seen as a lack of confidence in the future, Fusaro said.

"But it is probably just an aftereffect of the housing market crisis," Fusaro said.

A concern for Ricketts and Schlagenhauf is the increase in serious delinquency rates, particularly in auto loans, Ricketts said. Little Rock and Fayetteville had the highest increases in delinquent auto loans, those more than 90 days past due.

"Something like that we can say is tangible evidence that consumers are having difficulty managing liabilities they have taken out," Ricketts said.

"We can track the debt to specifically auto finance sources," Ricketts said. "Consumers that fit the subprime category predominantly acquire loans through that avenue. Those are the loans that seem to be showing the most trouble."

The cost of living is 10 percent below the national average. And housing prices rose 13 percent since the second quarter of 2012.

"As we were looking at some of the economics [of the Fayetteville area], we saw a robust job market and a housing market that was also showing strong growth in prices as well as sales," Ricketts said.