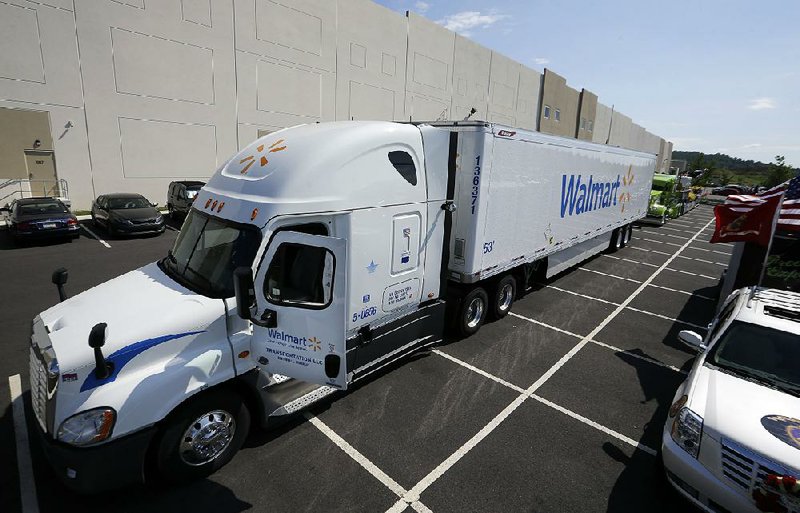 A Wal-Mart truck is parked in front of a distribution center last year in Bethlehem, Pa. Wal-Mart is testing the use of cameras inside some of its commercial vehicles.

Joining a growing number of trucking companies, Wal-Mart Transportation is experimenting with in-cab and forward-facing cameras in an effort to protect its private fleet of about 6,000 from lawsuits and insurance risk. 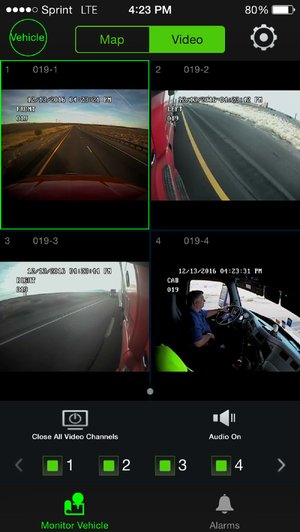 Photo by Special to the Democrat-Gazette
This screenshot shows images from a driver-facing camera in a commercial vehicle.

What sources inside the company have called a "soft pilot" program, both forward-facing and dual-view cameras will be used in several offices around the country. Dual views show the front and the inside of the cab.

Drivers in those offices must comply, though the company has asked its entire national fleet for volunteers. Future full implementation of the technology will be contingent on driver feedback.

"Utilizing and testing technology to make our logistics network, a core strength for the company, safer and even more efficient is nothing new at Wal-Mart," said Scott Markley, a Wal-Mart spokesman. "We're always striving to improve, and this is just one of many pilots to learn how we can be even better."

"I think it's a protection for the driver group," said Gary Mars, a Wal-Mart driver who volunteered to use the dual-view camera. "I think it is for our protection as well as the company's protection."

Mars said the decision to volunteer was not difficult because he has a friend who was exonerated for an accident thanks to camera footage.

"To me, it's a tool to protect me," said Mars. "As long as I'm doing my job and doing what I'm supposed to be doing, there is no other reason to worry about it."

"I feel like it is inevitable that it is going to happen just because that's the way of the industry," Mars said of both camera angles. "To me it only makes sense to have both. If you're in a court of law and they've got your forward-facing camera, and there's no doubt you maintained your lane, the next question out of the lawyer's mouth is going to be, 'What is that driver doing? Why can't we see what that driver's doing?'"

The most common camera technology, which Wal-Mart has opted for, is triggered by a critical event like a hard brake or sharp turn, then automatically records a short time before and after the event. The exact time frame of the recording is set by the company.

Zero Mountain Logistics, a young Fort Smith trucking operation with fewer than 50 trucks, is testing the technology, both the critical-event cameras and a constant live-stream system.

Howard Frost, the company's driver manager, has been testing the live-stream camera.

"Overall, I like it because it does protect me from people being stupid," he said. "You can't help what other people are going to do, but you've got to be able to protect yourself and your company, your insurance and your driver's license."

Frost said he finds the constant recording "a little intrusive" and would feel more comfortable with a camera triggered by a critical event.

"The way that I look at it is the front of the cab is my office, and behind the seats is my home, because that's where I sleep. The last thing you want is a Peeping Tom in your bedroom.

Barrett Deacon, managing partner at the Deacon Law Firm in Fayetteville, said there is "no upper limit" to the money at stake when there's a lawsuit.

"If the truck driver is not responsible for the accident, and it was the other person's fault, and it's a catastrophic accident, it's the difference between a zero liability for the company or millions and millions of dollars in some of the most serious situations," he said.

Deacon has been on both sides of truck accident claims, though he now primarily defends companies and drivers. He said the technology likely will become the norm.

"I think we're definitely headed to where in the future there will be more trucks than not with cameras," he said.

Deacon said the cameras "take out the guesswork" by law firms to reconstruct an accident from eyewitnesses and experts. "The cameras, in certain situations, render that a moot point," he said.

David O'Neal, director of safety services at the Arkansas Trucking Association, said there are several reasons why a company might install the technology. After an accident, he said, companies "know much quicker how to address it and what they need to do about it."

Companies also can use it "in a preventative fashion" to study driver behaviors that might trigger critical-event detection. There is also the potential for fuel savings in "monitoring how the driver is engaging the throttle and overdriving the equipment," O'Neal said.

Another incentive involves one of the fastest-rising costs for trucking companies -- insurance premiums. While the government requires only that drivers be covered up to $750,000 per accident, most larger carriers self-insure well above that.

Scott Cottingham, a senior broker with Aon Risk Solutions, said investing in safety technology is "probably the No. 1 way to go if you're trying to minimize rate increases right now."

"In our opinion, the more information, the better," Cottingham said. "Our advice is to arm yourself with as much information as you can. Some will say, 'I don't want to invade my drivers' privacy.' That's fine. That's your choice. A forward-facing camera is better than no camera."

Stephen Jones, senior vice president of the transportation group at Stephens Insurance in Little Rock, said larger and smaller companies are thinking the decision through. Because many larger companies are self-insured, they are considering investing in the technology because "they are saving immediate dollars on the claim, which goes directly to their bottom line."

Camera systems can range from a few hundred dollars to a few thousand per truck.

"We're looking for insurance lower costs, but at the end of the day it's more of a safety measure for us," said Michael Francks, general manager of Zero Mountain Logistics. "We're looking to make sure we can cover our own bases. If there are accidents, and we do have video footage, that can protect us."

He said some of his company's drivers have installed their own forward-facing cameras.

"To retrofit our fleet is going to be a substantial investment. But if we look at it from being able to utilize as evidence, it could have a substantial positive impact financially," Francks said.

"Most of the push-back we hear from drivers is, they don't want anybody invading their privacy," he said. "And you have to respect that it's an individual's home on the road, but it's also a commercial motor vehicle. It's definitely a balancing act."