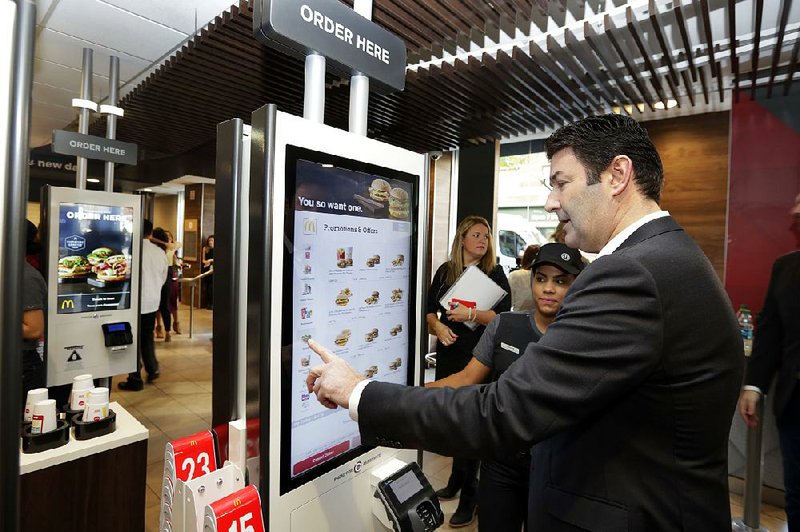 The imagery resurfaced when President-elect Donald Trump named Andrew Puzder to head the Labor Department. Puzder, chief executive officer of the company that owns Carl's Jr. and Hardee's, is known for saying significant wage increases would lead to job losses and the automation of some tasks.

But the sentiment does not square easily with the realities of the fast-food industry.

Despite local minimum wage increases, the number of fast-food jobs has climbed, and many employers say they've had difficulty retaining workers as the economy improves.

Restaurant chains including McDonald's and Olive Garden are indeed rolling out options like ordering kiosks and tabletop tablets. Those changes may eventually reduce or change the nature of restaurant jobs, but stem more from the industry adapting to customer habits, and are likely regardless of wages.

Puzder said as much to The Associated Press last year. "I think over time it would've happened anyway because of consumer preferences," he said about ordering kiosks.

His argument is that higher labor costs speed up such changes. But he has also cited better technology as a factor, noting the popularity of Amazon, Uber, and ordering pizza online.

For restaurant companies that have embraced forms of automation, the primary goal has been improving service to increase sales.

"Frankly, technology is something that our customers are embracing, whether it's through their phone, or whether it's through self-ordering kiosks. That's a societal trend. We want to adapt to that," McDonald's CEO Steve Easterbrook said at the company's annual meeting.

Where possible, Easterbrook said, automating basic tasks was "the smart thing to do." But he said McDonald's would always have the human element that "brings service to life."

For now, McDonald's has ordering kiosks in about 500 of its more than 14,000 U. S. locations. In those stores, the service model includes employees delivering food to tables.

Chains such as Starbucks and Panera say people who use options like mobile payment apps and online ordering tend to visit more frequently and spend more.

Blaine Hurst, president of Panera, said those who think about technology as a way to cut costs, rather than improve service, "not only miss an opportunity, but do your guests a disservice."

If anything, the restaurant industry has been slow to take advantage of new technologies, in part because companies are afraid of hurting business.

Executives like Puzder, for instance, say younger customers prefer ordering kiosks, but most others still want to place orders with humans. It's partly why most fast-food chains -- including Carl's Jr. and Hardee's -- have not widely implemented kiosks.

As for kitchen tasks, replacing humans isn't easy. Hurst of Panera noted "salad-making robotics" demonstrated at a conference, but said the technology is still far from being affordable or reliable on a mass scale.

Troi Wierdsma, who co-owns about 180 Carl's Jr. locations in California, said the chain discussed ways to automate tasks given rising labor costs. With Trump's election, she said those plans were off the table. Wierdsma said automation is about "progress," but the company still is watching how options like ordering kiosks play out.

James Bessen, an economist at Boston University's School of Law, said it may be that higher wages lead to faster adoption of automation. Even then, the results are complicated. Automation is often partial and transforms a job, he said, rather than making it obsolete.

And the improved efficiency may lead to more business -- and more jobs. The introduction of bar-code scanning in the 1980s partially automated the jobs of cashiers, he noted, but allowed stores to do more business.

Worries for cashiers rose again with Amazon's unveiling of a store concept with no checkout lines. The idea may be appealing because of the convenience factor, but it doesn't appear to be a reaction to higher wages.

Robots come up in discussions about minimum wage because the concept can be a vivid way to rally opposition to pay increases.

An ad from a group funded partly by undisclosed restaurant companies features a robot with a handkerchief on its head pouring what looks like pancake batter onto a grill. The ad by the Employment Policies Institute was in response to "Fight for $15" protests calling for higher pay and a union for fast-food workers.

Those kinds of arguments have always been used to oppose wage increases, said Chris Owens, executive director of the National Employment Law Project, which is funded in part by unions. As with other industries, Owens said automation of some fast-food tasks is inevitable regardless of labor costs.

Regulations can have unintended consequences that hurt workers, and higher labor costs may prompt business owners to scrutinize their costs. But it's not as simple as employees being replaced with machines.

Dunkin' Donuts CEO Nigel Travis, for instance, has said the company talked to franchisees about scrutinizing energy costs and signing customers up for the chain's mobile payment app, which reduces credit-card processing fees.