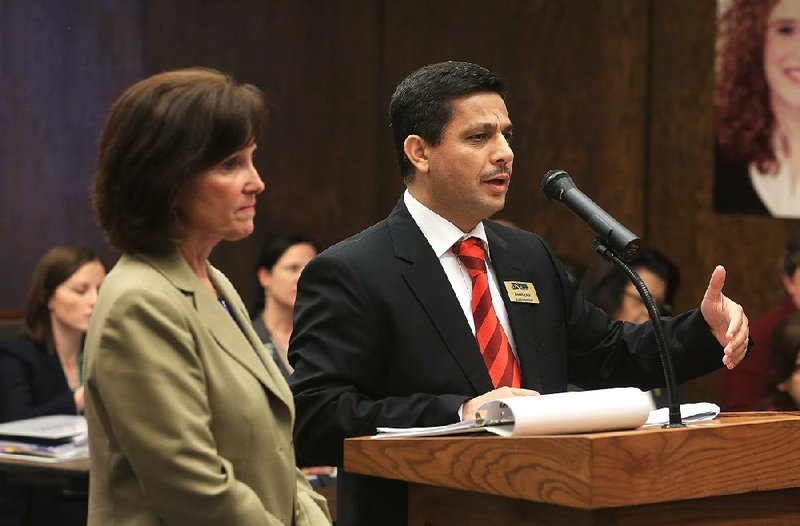 The LISA Academy's 13-year charter renewal -- if confirmed by the state Board of Education early next year -- will be a first in the state's 17-year history of open-enrollment charter schools. While state law permits the term of a school charter to be as long as 20 years before it is subject to state review for renewal, the longest term to date among the state's 24 charter school systems has been 10 years.

The vote for renewing the 411-student Little Rock Preparatory Academy's charter for three years was unanimous despite concerns from panel members about low academic achievement results, particularly at the kindergarten-through-fourth grade campus at 1616 S. Spring St.

The charter system also has a fifth-through-eighth grade campus that recently moved to the former Lutheran High School building at 6711 W. Markham St.

Stacy Smith, a panel member and the Education Department's assistant commissioner for learning services, told academy Superintendent Tina Long that she was disappointed in the quality of instruction she saw at a visit to the elementary school. That included seeing a teacher give the incorrect sound for a letter during a phonics lesson.

"I agree kids need to feel safe at school," Smith said in acknowledging serious traumas experienced by some of the pupils. "But you can't love children into ignorance. You must educate them."

Smith said that a majority of the school's elementary teachers do not hold traditional state teacher licenses and that teaching reading is difficult -- "rocket science" -- and not something that everyone can do. The academy leadership must have a plan for supporting and preparing its teachers, she said.

In 2016, about 17 percent of elementary pupils scored at desired levels on the English/language arts test as did 28.68 percent of the pupils on the math section of the test. State averages exceeded 30 percent on the two subject area tests for students of similar demographic characteristics. State averages topped 40 percent performing at desired achievement levels for all students regardless of demographics.

Little Rock Preparatory's primary campus is classified as academically distressed under the state's school accountability system, meaning that fewer than half of students scored at proficient levels over three years. The middle school is labeled as a "priority" school under the federal accountability system, meaning it was among the lowest-scoring schools in the state a few years ago when the priority designations were last made under the now defunct federal No Child Left Behind Act.

Because of those classifications, the Little Rock academy is already subject to regular monitoring and interventions from the state Education Department.

"I know what high-performing schools look like," said Long, who became the superintendent earlier this calendar year. "I want our schools to get there, and we have a clear pathway to do that," she said in describing the curriculum and staffing changes that have occurred at the campuses.

She also noted that children often arrive at Little Rock Preparatory two to four years behind their grade level. The families choose the school because their children weren't getting what they needed at other schools.

She said a three-year renewal is long enough to show gains without being an extensive period.

More than a half-dozen parents from the school appealed to the authorizing panel to renew the school's charter because of the comfort level they and their children have with the school and faculty -- despite the overall low achievement rates.

McKinzie Wright said she removed her three children from the academy when the middle school relocated and it was difficult for her to get them to the campus. The three begged to return, causing her to move her family closer to the new building.

Antoria Harrison called her choice to move her first-grader to the academy "hands down the best decision I ever made for my son."

Greg Rogers, a panel member and assistant commissioner for fiscal and administrative services, said the academy has improved its finances, including its reserve funds.

Smith said she was comfortable voting for the extension of the charter because of the improvements that have been shown at the middle school.

Deborah Coffman, chairman of the panel and the Education Department's chief of staff, told Long and other academy officials after the vote that training provided to Arkansas charter authorizers by a national organization is adamant that charter schools in academic distress must be shut down.

"However, every one of those schools represents children," Coffman said. "So we have to make a decision based on those children and not on a national recommendation. I think what you heard today is a very strong 'We believe you can turn this around -- but we want it turned around.'

"Good luck to you," Coffman continued. "There are a lot of people pulling for you, so if you don't reach out and ask for help from those people then it will be a very different conversation in the future."

In regard to the charter renewal for the LISA Academy, the only point of contention among the Charter Authorizing Panel members was the length of the renewal period.

Luanne Baroni, principal of the LISA-West Middle School, presented the system's case for charter renewal, detailing the system's features and the high achievement levels of LISA students as compared to students in Little Rock, North Little Rock, Pulaski County Special school districts and in the state of Arkansas overall on last year's state-required ACT Aspire exams. The LISA results were higher than the other entities for poor, special education or second-language English-speaking students, as well as for students who are not considered having high needs.

Baroni noted the racial, ethnic and economic diversity of the LISA student body, calling it the most diverse in the state and a reason to support the 13-year extension.

"We have very deliberately worked to change our demographics while still showing growth," Baroni said. "We have done that and have a track record of several years of showing that. Even with changing demographics we are still helping students grow, and we will continue to do that."

"We know that as a charter school we are subject to being called in at any time we veer off the track, but we feel the 13 years can give that assurances to the families and to potential contracting entities that we have to deal with."

Panel member and Deputy Commissioner Mark Gotcher complimented the 12-year-old charter system for basing its request for 13-year renewal on the interest of students.

Rogers said he was reluctant to approve a term that was inconsistent with past practice of no more than 10 years, particularly at a time when LISA had just opened a new elementary.

Barnes, who pointed out that LISA math scores on the Aspire were not necessarily higher than individual schools in the surrounding districts, also balked at the longer extension. She also referred to recent challenges by traditional public schools to the expansion of charter schools in Pulaski County.

"The discourse and strain is evident in the area," Barnes said. "I'm trying not to hold your school hostage to the deliberations for collaborative efforts for finding a resolution that meets everyone's needs," she told LISA leaders.

The Pulaski County Special district submitted a letter of opposition this week to the LISA charter renewal. The Little Rock district last spring aggressively but unsuccessfully opposed the opening of the LISA-Chenal Elementary and the expansion of eSTEM Public Charter Schools in Little Rock. The dispute prompted the Arkansas Education Board to create a committee to identify ways that traditional schools and independently operated public charter schools can better co-exist.

Coffman, the panel chairman, told LISA Academy Superintendent Atnan Ekin and his staff that the panel appreciated LISA Academy's efforts to reach out to other schools and communities. The charter system has hosted technology and foreign language events for students from multiple schools and has shared information on instructional practices with educators outside the LISA system.

"We know that you are collaborators," Coffman said.