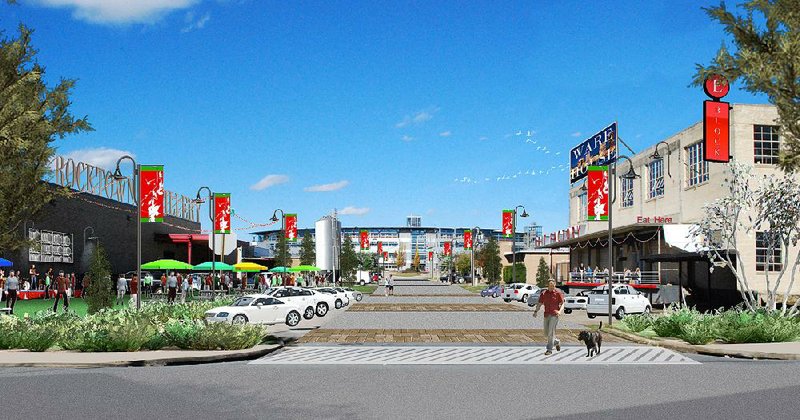 ARTISTS RENDERING OF: THE PAINT FACTORY Named the Paint Factory, this project is a redevelopment of the former Sterling Paint building. Listed on the National Register of Historic Places, the project will include a mix of first floor restaurant/retail, office and community room space with loft apartments above.

Included in the plans for the 50,422-square-foot property are 21,723 square feet of office space utilized by Cromwell, which plans to move from its current headquarters on Spring Street. Nearly 13,000 square feet will be used for 16 one- and two-bedroom loft apartments, and 4,021 square feet is earmarked for restaurant and retail space.

Also included is a 2,478-square-foot "community room" that can be rented by the public for events and a 3,600-square-foot carriage house that can be used as retail or restaurant space.

Central Construction Group is the contractor on the project, which is scheduled for completion in November. Cromwell chief operating officer Dan Fowler said the development is intended to spur additional growth in an area east of Interstate 30.

"We've got a great vision for this building and this site," Fowler said. "I think a lot of people thought we were crazy off and on, and we've gotten a lot of people excited about it as we've gone on."

Neighbors in the area, dubbed the East Village, include the Clinton Presidential Center, Heifer International headquarters, Rock Town Distillery, Lost 40 Brewing and Rebel Kettle. Bringing additional restaurant, retail and residential options to the area has been a goal of Fowler and Moses Tucker President Chris Moses for nearly five years.

"I think in the next three, four, five years those that follow us here will find a very different environment, a very exciting one," Moses Tucker Chairman Jimmy Moses said. "I'm really thankful we're able to partner with a great firm in Cromwell."

A nearby 2.1-acre lot sold for $1.7 million and is the site of a planned retail and residential project. No timeline has been set for that development, but the owner of the lot, Rusty Thompson, said it will depend on the Arkansas Highway and Transportation Department's plans for the expansion of I-30 downtown.

Much of the city's downtown development in recent years has centered along Main Street. Progress has stalled on higher-profile properties owned by developer Scott Reed. Downtown Partnership Executive Director Gabe Holmstrom said he remains hopeful that development on those properties will resume soon.

"This is an exciting next step, following up on some of the early developments that Rock Town, Lost 40 and Rebel Kettle have made over here," Holmstrom said. "There is no doubt with the rich history of the Cromwell firm and what they bring to the table, it's going to be amazing to see this project unfold. I look forward to seeing the other projects that occur as a result of this."

Efforts to get the property listed on the National Register of Historic Places were successful and the project will qualify for federal and state tax credits. Fowler said via text that "state and federal tax credits can be worth 20 percent or more of our investment in rehabilitation of the property. Not in a position to share anything more specific than that."

Central Construction Group President Jonathan Shively said his company has worked on historic rehabilitation projects, like the restaurant and residential space now available at 615 Main St. and the Mann on Main at Fourth and Main streets.

"I like all of our projects, I love building any project, but the one you have the most pride in are ones like this where you embrace the old architecture," Shively said. "Look at the way this is built, it's a lot of fun to save the building."

Cromwell's Paint Factory development sits across the street from Rock Town Distillery. Earlier this year the distillery planned to build at a new location and begin operating in December, but owner Phil Brandon said he is currently reviewing possibilities, including signing a new lease.

"We have extended our lease until the end of June and we are exploring options," Brandon said.