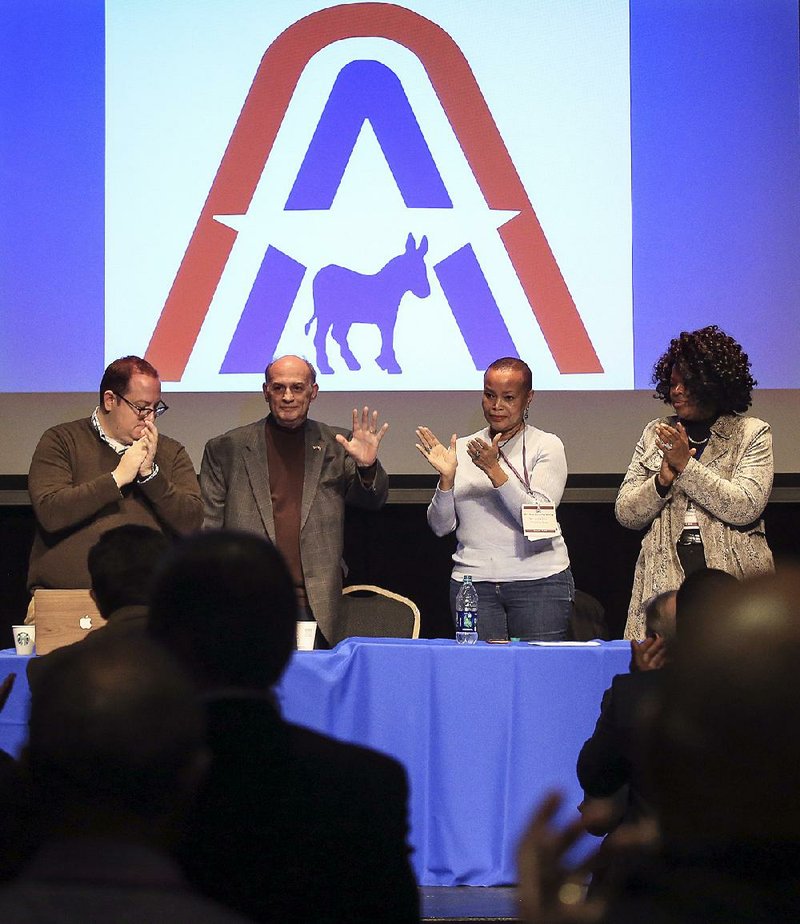 Deferring selection of new leaders until after the 2018 gubernatorial elections, a majority of Arkansas Democratic Party committee members voted Saturday to buck a wing of the party that attempted to call for more immediate elections.

The Arkansas Democratic Party's State Committee met Saturday in North Little Rock and elected two men and two women from each congressional district to serve on the party's executive committee. The elected members will serve for two years.

By choosing not to reschedule officer elections, state Democrats voted to allow Chairman Vincent Insalaco to continue to lead the party until as late as February 2019.

Insalaco told party members after the vote that he intended to stand behind his announcement last week that he would not run for a third term.

He said he will evaluate how long to continue in his current term before resigning, but that the decision will not be made until after the holidays.

Speaking to a reporter after the meeting at North Little Rock's Argenta Community Theater, Insalaco said he would like to see a special election held to decide on a new chair in the first half of next year.

Under party rules amended earlier this year, the length of officers' terms was extended from two years to four, and officer elections were scheduled to be held after the 2018 election.

A transition plan was also developed to help ease into the longer terms by holding officer elections in February.

However, differing opinions on the specifics of the transition plan led to it never being officially implemented, according to party attorney Chris Burks.

That led to a group of state committee members attempting to overrule party Secretary Karen Garcia, who chaired Saturday's meeting, and adopt the transition plan. Their motion, called by state Rep. David Whitaker, D-Fayetteville, failed 52 to 43.

With the expectation of a new vote on party leadership early next year, House Minority Leader Rep. Michael John Gray, D-Augusta, announced plans last month to run for party chair. He is joined by Drew Pritt, a political consultant from North Little Rock.

H.L. Moody, a party spokesman, said last week that Insalaco's decision not to seek a third term would likely prompt other candidates to run.

Burks said the committee's decision was in essence a proxy vote on party leadership.

Gray voted with the committee members who supported adopting the transition agreement. Other members of the Legislature voted against the motion.

Still, he said he plans to continue running for party chair when Insalaco announces his resignation and calls for an election.

Insalaco told a reporter he had not been aware of the rules discrepancy until Friday, and had previously expected that a vote would be held in February. But he said it was more important that the party abide by its rules.

"If I had my choice, we would have done the transition plan," Insalaco said.

Making his case for the transition plan, Whitaker told his fellow committee members it was necessary to pick Insalaco's successor sooner than later.

"This party cannot drift for another three months or another two years," Whitaker said.

Committee members stood up to vote for or against the motion.

In his speech to the committee after the vote, Insalaco said the party does not play the same role in Arkansas politics as it did when members dominated all levels of state government.

After losses in the Legislature in the previous four election cycles, Insalaco said it is important that the party become an institution for its diverse, but smaller constituency.

"We didn't lose because of what we did, we lost because of what we stand for," Insalaco said, specifically pointing to platform positions supporting abortion rights; lesbian, gay, bisexual and transgender rights; and scientific evidence for global climate change.

Pritt said he had hoped to move to hold officer elections on Saturday.

Because he is not a current member of the state committee, the chairman denied Pritt's motion. He was not permitted to vote on the transition plan.

After the committee vote and subsequent speeches by Insalaco and other party members, separate votes were held to elect executive committee members representing each of the state's congressional districts.

The executive committee of the party develops campaign and fundraising strategies, and also recruits candidates.