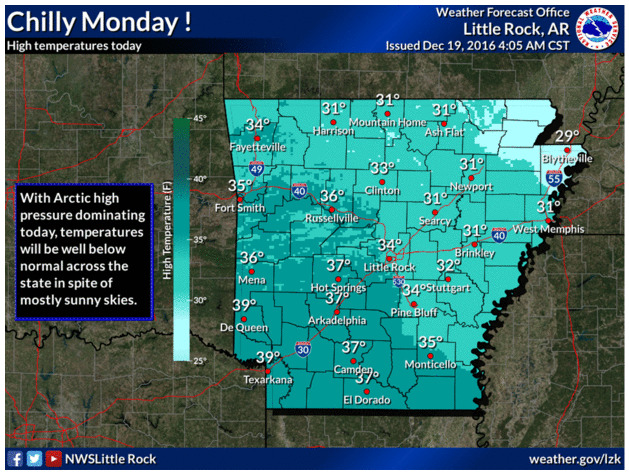 The 12-degree reading — which was officially recorded through a station at Clinton National Airport — came on a day when brutally cold air settled throughout the state.

By 7 a.m., Monticello in south Arkansas was one of the warmest readings across the state at 20 degrees. Little Rock had warmed to 13 at that point while Fayetteville was 4, Mountain Home was 5 and Hot Springs was 16.

Wind chills Monday morning were in the single digits across most of the state and high temperatures were expected to stay in the upper 20s to mid 30s, the weather service said.

It was expected to warm up as the week continued. In Little Rock, highs in the 40s and 50s were forecast Tuesday through Friday.

The first day of winter is Wednesday.

Brrrr... Here's a look at observed temperatures from 7am this morning. Single digits across the north to around 20° in SE AR. #arwx pic.twitter.com/IKYKuKVnDX