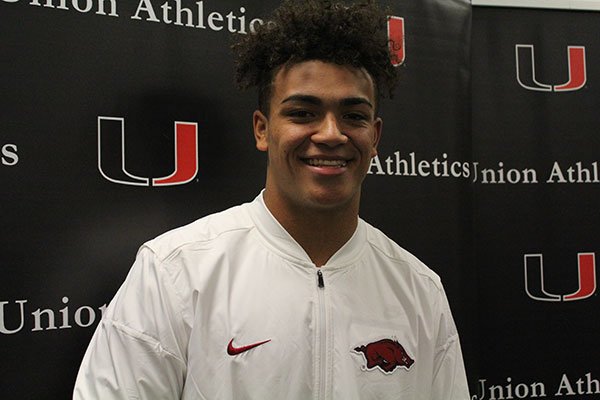 TULSA, Okla. — Tulsa Union linebacker Kyrei Fisher has flipped his commitment from Minnesota to Arkansas during a signing ceremony at his school.

He signed a financial aid agreement with the Razorbacks and plans to report to Fayetteville on Jan. 12th.

“My top two are Minnesota and Arkansas," Fisher said to lead off his signing ceremony at his high school. "Minnesota is a great school. I love the coaches. It’s a really great facility up there and they have top-of-the-line everything. But, here recently there’s been a lot of stuff going on.

"Obviously, Minnesota is 10 hours away and it’s really hard for my family to get there a lot. Family is really important to me. With that being said, I decided to commit to the University of Arkansas.”

Fisher, 6-3, 235 pounds, 4.62 seconds in the 40-yard dash, picked the Hogs over Minnesota, Michigan State, Colorado, Houston, SMU and several others. He recently took an official visit to Texas after receiving late interest from the Longhorns.

The linebacker privately committed to Arkansas on Friday, and he and some family then took an unofficial visit to Fayetteville on Saturday.

He has worked hard in the classroom to make sure he could graduate in December and becomes the 10th mid-term enrollee for the Razorbacks in this recruiting class.

“It has always been my goal to come into college and start so coming in early I get to go through spring practice and I get to go on the weight program and I get to learn the defense so that just a big head start," Fisher said. "That is going to be the best chance for me to start early.”

“Coach Robb called us a lot and we talked a lot and Coach B is a great guy,” Fisher said. “I love Coach Hargreaves. Really everybody. Arkansas has a great staff and I can’t wait to get over there and see what they do with me.”

Union doesn't finish up classes in time for him to participate in any bowl practices.

“I can’t because we get out of school late, but I will be there in January," Fisher said.

The fact that Arkansas is apparently switching to a 3-4 defense was also a factor for Fisher.

“They have talked about that and they are going to run four linebackers,” Fisher said. “It gives me a better chance to start, too.”

Fisher led the Redskins to an 11-2 record and the Class 6A Division I championship. and had four sacks in the Redskins' 57-43 win over Norman North in the Dec. 2 championship game at the University of Tulsa’s Chapman Stadium.

Union head coach Kirk Fridirch notes that Arkansas is getting a great player.

"It was fun to Kyrei put it all together in his senior year, and then, of course, he left his best for last," Fridrich said. "He had three sacks in the first half (of the championship game) and really created some problems for people in the playoffs, and played his best football the last four games of his senior year.

"The sky’s the limit for him. He’s really an outstanding athlete and a great leader as well as one of our team captains and I think he’ll be a great asset for the University of Arkansas."

Fisher had 71 tackles and 4 sacks as a junior and had 65 tackles and 8 sacks this season. He said his physicality and speed are his strengths.

“He’s quick to the ball with an explosive closing burst,” Lemming said. “He flows well to the ball and takes good angles. He can breakdown in space and make plays.”