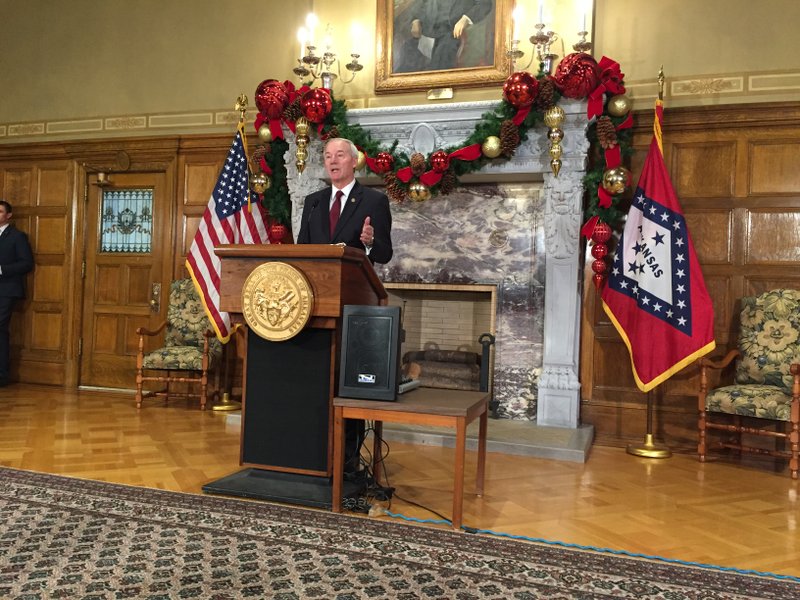 Gov. Asa Hutchinson talks about his priorities for the coming legislative session at the state Capitol on Tuesday, Dec. 20, 2016.

At a news conference Tuesday, the governor sorted his policy plans into three categories: economic development, education, and efficiencies and government transformation. He broke down each category into specific proposals and said the purpose for this announcement “is not to create news” but to “capture the essence of what my priorities will be.”

Initiatives touted by the governor include changing the state pay plan, an “ArFuture” grant to help students pay tuition at two-year schools if they study in high-priority fields, consolidating certain bureaucratic boards and commissions and increase higher education funding by $10 million.

Hutchinson also said he wants to introduce a reading initiative to improve literacy rates among Arkansas students, improve the state foster care system and establish regional mental health centers for inmates. The governor added there are still priorities of his that are not included on the list he provided to reporters at the news conference.

“We must drive economic development and further educational opportunities,” the governor said.

Proposals outlined by the governor at the news conference mostly did not center on social issues. When asked about legislation regarding abortion, the governor said he was aware a bill has been proposed, though he does not plan to introduce any bills of his own. Hutchinson said he ran for the governor's seat on the platform of job growth, which is why his agenda focuses on economic development.

When asked which of his own proposals he is prioritizing the most, the governor acknowledged it was a difficult choice and said, “I'm not going to put any of them higher than the other.”