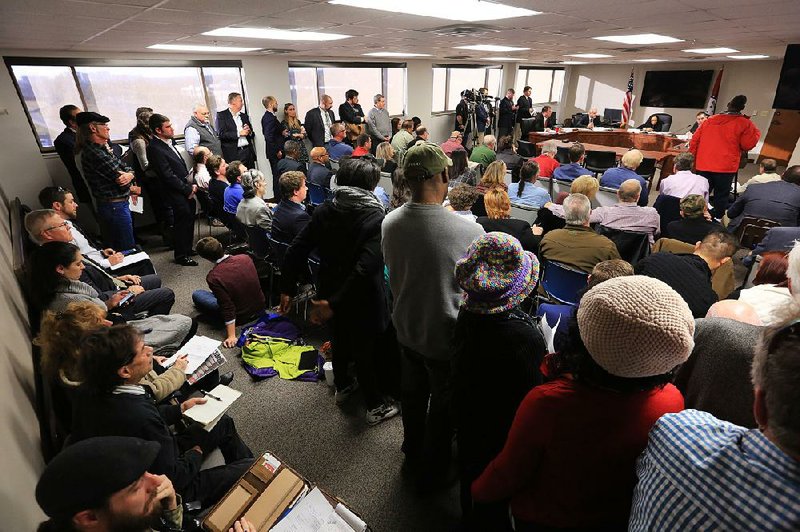 People pack the room where the newly formed Medical Marijuana Commission met Tuesday in Little Rock. The commission, in its second meeting, decided how many cultivation centers to license for growing marijuana for medical use.

The Arkansas Medical Marijuana Commission voted Tuesday to allow as many as five cultivation facilities in the state once rules about growing, processing and distribution of the drug are finalized.

The Arkansas Medical Marijuana Amendment, passed by voters in last month's general election, allows from four to eight cultivation centers to be licensed by the commission. The commissioners decided Tuesday, at their second meeting, to start on the smaller end of the scale.

Commissioner Travis Story of Fayetteville said he was concerned that the licensed cultivation facilities would face too much competition at the start if there are more than four.

Story suggested that one center be granted a license in each of the state's congressional districts. However, concerns about the unequal sizes of those districts led another commissioner, Dr. Carlos Roman of Little Rock, to suggest one cultivator be placed in each public health region, of which there are five.

Congressional districts are sized according to population, so the seven-county 2nd District, in central Arkansas, and the nine-county 3rd District, in the northwest, are much smaller than the 1st and 4th districts, which cover about 29 and 30 counties respectively. The state Department of Health's public health regions roughly encompass each corner of the state, with a seven-county central region.

The commission voted 3-2 in favor of Roman's proposal to limit the number of initial cultivation licenses to five. Those voting for it were Roman; Dr. Ronda Henry-Tillman of Little Rock, commission chairman, and James Miller of Bryant. Story and Dr. Stephen Carroll of Benton voted no.

However, it was not clear following the vote whether the commissioners also had voted to adopt the plan to have one license in each public health region.

Roman said dividing the centers among the five public health regions was the "spirit" of his motion, but a lawyer advising the commission said the minutes would have to be reviewed to determine what the motion was.

Henry-Tillman said the plan to begin with a limited number of cultivation centers was merely to help ease the state into the process of allowing marijuana to be grown and processed.

"I think at some point we'll have eight," she said, referring to the maximum set in the constitutional amendment.

The commission is not required to begin accepting applications for the cultivators and dispensaries until June 2017, and that date can be pushed back by the Legislature. The regular session starts Jan. 9.

Following the vote, the commissioners discussed their thoughts about what a cultivation center would look like -- ideas ranged from a pastoral farm to a factory -- and what responsibilities should come along with a license from the commission.

The responsibilities proposed by the commissioners included security, packaging and labeling, transportation and quality control. However, no vote was held to establish rules or guidelines.

"I hate it when other people define what we are supposed to define," Story said. "Defining a cultivation facility is within our purview."

The commission unanimously voted to look into possible funding sources to pay for a field trip to tour cultivators and dispensaries in another state where medical marijuana is already being grown and sold.

Joel DiPippa, a Department of Finance and Administration attorney who advised the commission, said he would have to check to find out if travel funds were available to the commissioners.

"This is a very public situation and we don't want to misspend or misappropriate any of the public's money," DiPippa said.

The commission is scheduled to meet again Thursday in Little Rock.