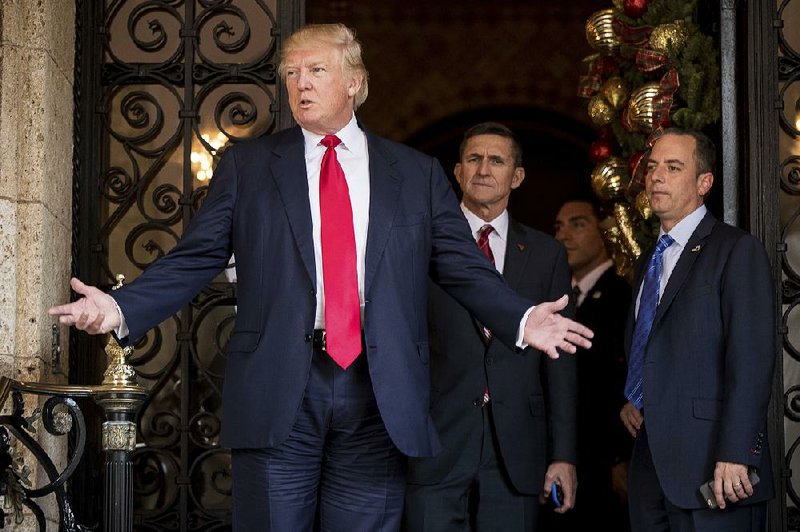 Donald Trump is no longer looking to "drain the swamp" in Washington, said Newt Gingrich, a top ally for the president-elect.

In an NPR interview that aired Wednesday morning, Gingrich said he was instructed not to use the phrase anymore because it has fallen out of favor with the president-elect.

"I'm told he now just disclaims that," Gingrich said on Morning Edition. "He now says it was cute, but he doesn't want to use it anymore."

Gingrich said he had "written what I thought was a very cute tweet about 'the alligators are complaining,'"­ but that "somebody wrote back and said they were tired of hearing this stuff."

Gingrich actually drafted two tweets in recent days about draining the swamp -- tweets that apparently earned him the rebuke.

"The alligators are unhappy about draining the swamp. That is the explanation for the nonsense about subverting the electoral college," one said.

"Watch the alligators lose today as the electors vote. Draining the swamp begins in January," the other said.

But Trump has acknowledged his on-again, off-again relationship with the phrase. And it actually wasn't a mainstay in the campaign until the final days.

Trump freely admitted that he never much liked the phrase, in fact. But he said that his crowds had prevailed upon him to embrace it.

In Florida on Wednesday, Trump stood by his plans to establish a registry for Muslims and temporarily ban Muslim immigrants from the United States.

Speaking outside his Mar-a-Lago resort, Trump did not walk back the proposals after he was asked by a reporter whether he was rethinking or re-evaluating them after the truck attack in Berlin.

"You know my plans," Trump said.

He went on to add that the attack on a Berlin Christmas market, which was claimed by the Islamic State group, had vindicated him. German authorities are seeking a 24-year-old Tunisian migrant, whom they say has ties to Islamist extremists, in connection with the attack, which killed 12 people and injured dozens.

"All along, I've been proven to be right. One-hundred-percent correct," Trump said. "What's happening is disgraceful."

Trump has long called for a temporary ban on Muslims entering the United States and has expressed openness to a registry of Muslims already in the country.

A year ago, in a statement, Trump said he wanted a "total and complete shutdown of Muslims entering the United States until our country's representatives can figure out what is going on."

The proposal was sharply criticized by Republicans and Democrats alike. And later, Trump's senior aides and surrogates sought to soften the proposal, suggesting that Trump would support a ban on immigration only from countries that had been compromised by terrorism.

But given an opportunity on Wednesday to clarify his remarks, Trump suggested that his plans stood as he had articulated them early in his campaign. The statement proposing a "complete" shutdown of Muslim immigration remains on Trump's website. And Trump has not clarified how exactly he would address the issue as president.

In response to other questions from reporters outside Mar-a-Lago, Trump said that he had last spoken to President Barack Obama two days ago.

He also was asked about his characterization of the Berlin attack as an attack on Christians.

"ISIS and other Islamist terrorists continually slaughter Christians in their communities and places of worship as part of their global jihad," Trump had said in a statement issued after the attack on Monday.

On Wednesday, Trump appeared unfamiliar with the statement issued in his name.

Trump is spending the final days of 2016 huddling with advisers at his palatial private estate in south Florida. He also met Wednesday with the heads of Boeing and Lockheed Martin, companies with high-dollar government contracts that Trump has criticized. Boeing has a contract to build two Air Force One planes and Lockheed Martin builds the F-35 fighter jet.

Trump said of his meeting with Lockheed Martin CEO Marillyn Hewson, "It's a little bit of a dance. We're trying to get costs down."

Dennis Muilenburg, CEO of Boeing, said his company was committed to working with Trump to lower costs on the Air Force One project.

The president-elect also was finalizing his senior White House team, wrapping up a decision-making process that has been dogged by infighting among rival factions within Trump's organization. Some of Trump's original campaign aides have expressed concern to the president-elect that they are getting boxed out in favor of those more closely aligned with incoming chief of staff Reince Priebus, former chairman of the Republican National Committee.

Among the early advisers who will not be joining Trump at the White House is Corey Lewandowski, his combative first campaign manager. But the operative won't be far away -- Lewandowski announced plans to start a political consulting firm with offices just a block away from the White House.

Lewandowski oversaw Trump's campaign through the Republican primaries, but he clashed with the candidate's family and was fired. Still, he remained close to Trump, talking with him frequently and showing up occasionally at the president-elect's offices during the transition.

Lewandowski said he was offered "multiple opportunities" to join the administration, though people with knowledge of the process said those opportunities did not include senior positions in the West Wing.

The president-elect announced plans to hire economist Peter Navarro to run a new National Trade Council that will be housed in the White House. Navarro, author of Death By China: Confronting the Dragon -- a Global Call to Action, has endorsed a hard-line approach toward relations with Beijing.

In a statement, the Trump transition team said the creation of the council "demonstrates the president-elect's determination to make American manufacturing great again."

In appointing Navarro as director of trade and industrial policy, Trump is signaling that he wants to follow through on his tough campaign rhetoric in which he blamed the Chinese for the large U.S. trade deficit and manufacturing woes.

During the campaign, Trump threatened to slap a 45 percent tariff on Chinese imports.

Trump endorsed Navarro's 2011 book as well as Navarro's film version of the work.

"I read one of Peter's books on America's trade problems years ago and was impressed by the clarity of his arguments and thoroughness of his research," Trump said Wednesday in a statement announcing the appointment. "He will fulfill an essential role in my administration as a trade adviser."

Trump said the new trade office would develop policies to shrink the nation's trade deficit and curb the offshoring of jobs, as well as to lead initiatives such as the "Buy America, Hire America" program.

Navarro, in a statement, said he would be honored to serve Trump and the nation and "to advise on policies to re-balance our trade, rebuild our industrial base, and restore America's comprehensive national power by making America great again."

Trump also named billionaire investor Carl Icahn as an adviser on a regulatory overhaul, though the transition team said Icahn would not be serving as a federal government employee.

Information for this article was contributed by Aaron Blake and Abby Phillip of The Washington Post; by Jonathan Lemire and Julie Pace of The Associated Press; and by Don Lee of Tribune News Service.