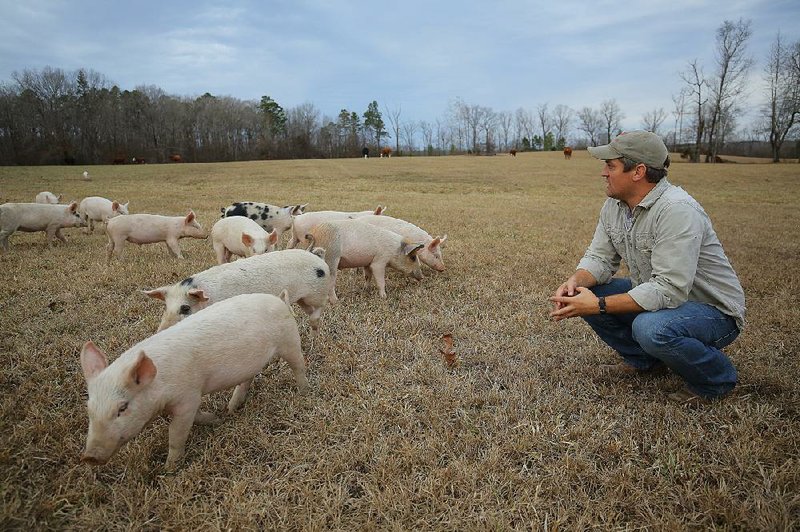 Damon Helton, a retired Army Ranger, runs a farm in Garland County and has credited the work with helping him heal from the post-traumatic stress of five deployments to Afghanistan and Iraq.

Damon Helton had one problem when he bought a 160-acre farm in Lonsdale four years ago -- he didn't know the first thing about farming. 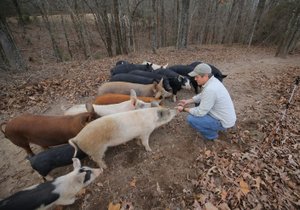 Photo by Stephen B. Thornton
Damon Helton, a retired Army Ranger, on his farm near Lonsdale on Thursday afternoon. He has credited agriculture with “healing him,” from the post traumatic stress of five deployments to Afghanistan and Iraq.

Three years out of the military, the retired Army Ranger was still transitioning back to civilian life. He had a well-paying sales job, but it took him away from his wife and children too often.

So he bought the Farm at Barefoot Bend in Garland County.

Fortunately for Helton, he discovered resources that catered to someone like him -- a veteran looking to start a farm. More precisely, he found the National Center for Appropriate Technology's Armed to Farm Program, the state Agriculture Department Homegrown By Heroes program and the Farmer Veteran Coalition.

A wealth of veteran-friendly farming groups have sprung up in the past five years. The farming population is aging quickly, and the industry needs young farmers to fill the void. Veterans, experts say, fit the bill.

"Veterans aren't afraid of adversity," said Margo Hale, Fayetteville-based regional director for the National Center for Appropriate Technology. "They're trained to deal with and overcome problems, and in farming, there's a lot of adversity and a lot of problem-solving."

The relationship is symbiotic. Working with land and livestock has proved to be beneficial to a lot of veterans, Helton said.

He pointed out similarities between a day on the farm and a day in uniform: early mornings, physical labor and discipline.

Farm work can be therapeutic, especially for veterans struggling with post-traumatic stress resulting from their time in the service.

"There's just something about, literally, seeing the fruits of your labor that's healing; I can tell you from firsthand experience," Helton said.

Helton, 37, wasn't raised on a farm. He grew up in southwest Little Rock.

He enlisted in the Army in 2001 after two years at the University of Arkansas at Little Rock. Several months later, terrorists flew planes into the World Trade Center towers in New York City.

The Army Ranger deployed five times -- once to Iraq and four times to Afghanistan -- over the next eight years. He and his wife, Jana, married in the middle of it. They now have four children.

They found the farm while leisurely driving in the country one afternoon.

"Sustainable farming" caught the Heltons' attention. They attended an Armed to Farm workshop in Fayetteville that jump-started them.

Now, they raise grass-fed cattle, pastured poultry and pastured hogs. Everything is natural, and they don't use antibiotics to treat their animals.

Most of the farmhands are veterans, Helton said. The rest are Helton's children. Even the youngest, a 2-year-old, collects eggs.

The Heltons' produce can be found at several central Arkansas farmers markets and the family's small grocery store, the Old Crow General Store, at 17202 Arkansas 5 in Benton.

Learning to farm was their first challenge, then the Heltons had to learn how to get their products to market.

"It was hard because we produce high-quality stuff," Helton said. "That makes getting it to market harder because you don't want to bring the price tag down."

In stepped Homegrown By Heroes, a state Agriculture Department program that provides farmers who are veterans with marketing and education tools. Enrollees receive large signs emblazoned with the program's logo -- a silhouette of a saluting soldier.

Having that label gives farmers' products an advantage over the competition, said Rachael Tucker, the program coordinator at the Agriculture Department.

"It's a real incentive when two products are side by side," she said. "The consumer knows that not only was it grown in Arkansas, but it was also grown by a veteran. They know it supports a veteran returning to civilian life."

Jan Farmer, after 29 years in the Air Force Reserve, bought her White County farm a decade ago. She planned to raise food only for her family. She started with goats and chickens, then eventually added dairy sheep.

Last year, she decided to start selling some of her produce. She knew a lot about farming but little about business. The resources provided by Homegrown By Heroes proved invaluable.

"Having the sign is great, but the networking, connecting with other veterans and having a wealth of information at your fingertips was huge," she said.

Farmer has started selling some meat and baked goods at the Searcy Farmers Market and the Hillcrest Farmers Market in Little Rock. She carries a Homegrown By Heroes placard with her to those markets.

Farmer and Helton said they strongly recommend that other veterans look into agriculture. The industry would be happy to have them, they say.

"When you get out, you're like a spinning compass," Helton said of leaving military service. "Are you going to become a cop? Go back to school? Ag just fits."