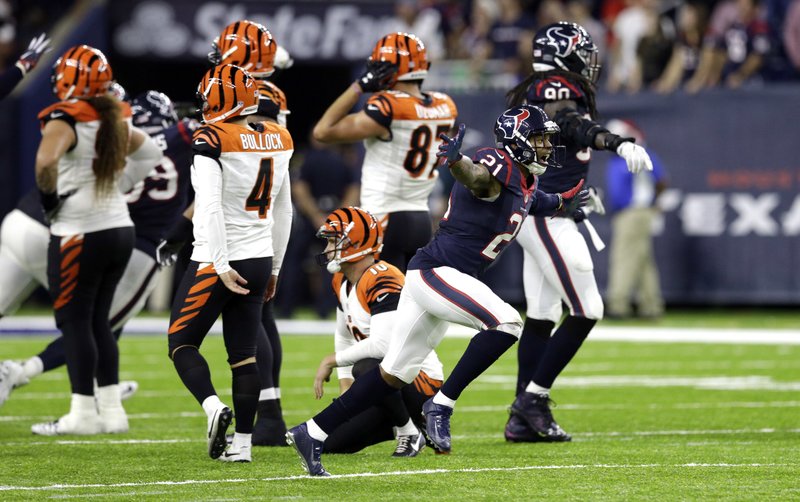 HOUSTON -- The Houston Texans have had more than their share of bad luck this season with J.J. Watt playing just three games before season-ending back surgery and high-priced offseason pickup Brock Osweiler playing so poorly that he was benched last week.

But on Christmas Eve the Texans got a break that allowed them to hold on for a victory and clinch their second consecutive AFC South title.

"It was meant to be," Texans receiver DeAndre Hopkins said.

Tom Savage threw for 176 yards in his first career start after helping the Texans (9-6) rally for a victory over Jacksonville last week after taking over when Osweiler was benched after throwing interceptions on back-to-back possessions in the second quarter.

The Texans knew they were in the postseason with a victory after the Titans fell to the Jaguars earlier Saturday. But it didn't look good for them early with Savage completing just two passes for 13 yards and them trailing 3-0 at halftime.

Savage was able to move the offense much better in the second half, but Houston still struggled in the red zone.

"It was just taking a deep breath and realizing what we have on defense, what they're doing for us," Savage said. "All week it's just protect the ball and find a way to win and that's what we did. The guys really rallied around me and made some huge plays for me."

The Texans had a first down at the 6 early in the fourth quarter before the offense stalled and they settled for a 22-yard field goal that put them up 6-3. Quintin Demps got his career-high fifth interception when he intercepted Andy Dalton's pass two plays later, but Houston couldn't move the ball and had to punt it away.

Cincinnati (6-8-1) regained the lead when Dalton found Brandon LaFell on a short pass and he took it 86-yards for a touchdown that made it 10-6 with about 11 minutes left.

A 24-yard touchdown run by Alfred Blue put the Texans back on top with about nine minutes left, but the extra point was blocked to leave Houston up 12-10. That score was set up by a 21-yard reception by Hopkins.

Veteran cornerback Johnathan Joseph said the adversity they went through this season makes clinching the division even sweeter.

"I think it makes you a stronger team, he said. "Everyone rallies together and fights for each guy on this team and the coaching staff and I think today was a prime example of it."

Dalton finished with 268 yards passing with a touchdown and an interception.

"The way this season's gone, when we've needed to make a play, we haven't been able to do it," Dalton said. "It's not one thing that's caused it. It's just the way things have gone this year. It's kind of been how our season's been, and it's unfortunate it's been that way."

Lamar Miller missed his first game this season because of an ankle injury and Blue had 73 yards rushing in his place.

After a terrible first half on offense, Houston finally got a little something going after halftime and tied it at 3-3 with a 25-yard field goal early in the third quarter.

The first half was an offensive struggle for both teams with a combined 12 punts. The Texans were a bit worse than the Bengals though and had just two first downs and 34 total yards with minus-5 yards passing because of three sacks.

The Bengals had a 3-0 lead at halftime after a 43-yard field goal by Bullock at the end of the second quarter.

The Texans didn't cross midfield their first drive of the third quarter when Will Fuller caught a 14-yard pass that got them to the Cincinnati 47.