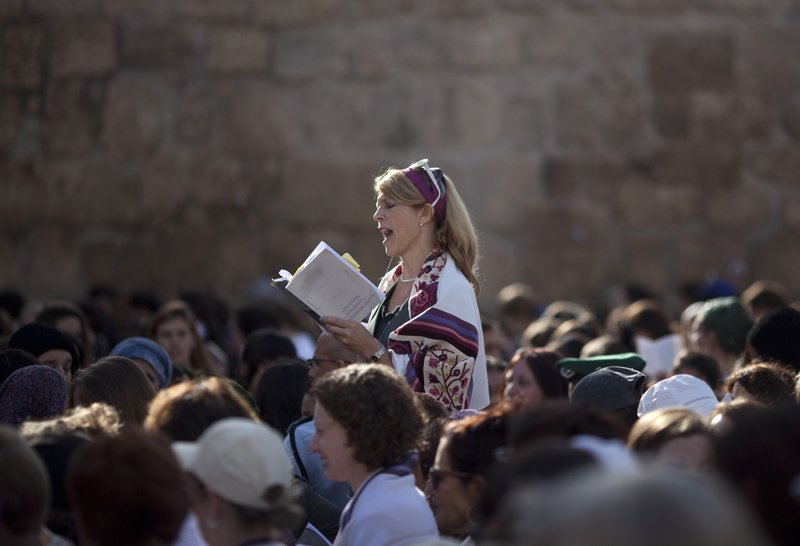 A woman prays at the Western Wall, the holiest site where Jews can pray in Jerusalem’s Old City.

The issue is of particular importance to the Jewish community in the United States, where the more liberal Reform and Conservative streams of Judaism are dominant. Israeli Prime Minister Benjamin Netanyahu pushed the plan in an attempt to please American Jews, a key source of support for Israel, despite stiff opposition by ultra-Orthodox and religious nationalist elements in Israel who are key members of his own government.

"I know this is a sensitive topic, but I think it is an appropriate solution, a creative solution," Netanyahu said at the start of Sunday's Cabinet meeting, where members voted on the plan.

According to the government plan, a copy of which was obtained by The Associated Press, Israel will build a new plaza for mixed-gender prayer at the Western Wall, adjacent to the Orthodox prayer plaza but separate from it.

The Jewish Federations of North America, an umbrella group of Jewish communities, issued a joint statement with the Reform and Conservative movements calling the decision a "dramatic, unprecedented and critical acknowledgement" by Israel that the holy site should incorporate liberal Jewish prayer traditions.

"Though much work regarding the implementation of this decision still remains, it is because of our perseverance and commitment to Jewish peoplehood that we are measurably closer today to the ultimate symbol of that reality -- one wall for one people," the statement read.

The Western Wall, a remnant of the ancient Jewish Temple complex, is the holiest site where Jews may pray. The site is administered by ultra-Orthodox rabbinic authorities, who have a monopoly over religious affairs in Israel. There are separate men's and women's prayer sections. Non-Orthodox prayer, like mixed-gender services and women-led prayers, are forbidden.

The Reform and Conservative movements of Judaism have supported the group's cause and demanded representation at the holy site. Netanyahu appointed a committee in 2013, led by the quasi-governmental Jewish Agency, to seek solutions for non-Orthodox prayer there. Shortly after, a temporary prayer platform was erected for mixed-gender prayer, but advocates say it was not an official site and that it was not always open.

The $9 million initiative will build a permanent mixed-gender prayer area where the temporary platform is today. It will also create a new entrance to the Western Wall area so both Orthodox and non-Orthodox prayer areas will be given equal prominence. The pluralistic prayer area will not be managed by the ultra-Orthodox rabbi of the Western Wall, but by a committee including representatives of the Reform and Conservative movements. The new prayer area will allow Women of the Wall to hold women's prayers.

"It stands to open the floodgates of women's rights in the public sphere in Israel ... and opens the floodgates for Jewish pluralism in Israel," said Shira Pruce of Women of the Wall. "This is unprecedented change." Pruce said a Cabinet minister's staffer relayed the result of the vote to the group before the Cabinet officially announced it.

Shmuel Rabinowitz, the Rabbi of the Western Wall, said in a statement that he received news of the decision "with a heavy heart and a sigh of relief."

Meanwhile, Israeli forces shot and killed a Palestinian on Sunday after he opened fire at a West Bank checkpoint and wounded three soldiers, the military said.

The attacker opened fire near the Jewish settlement of Beit El. Medics said two of the wounded were in serious condition.

Palestinians identified the gunman as Amjad Sukkari, a 34-year-old policeman who worked as a bodyguard for the Palestinian attorney general.

Later Sunday, the military said a Palestinian attempted to ram his vehicle into soldiers north of Jerusalem. It said troops opened fire, wounding the man, who was taken to the hospital for treatment.

In the piece, titled "Don't Shoot the Messenger, Israel," Ban reiterates many of his earlier comments, calling Israeli settlement activity "an affront to the Palestinian people," adding that "it is human nature to resist occupation." He also called for a freeze on settlement activity.

Ban wrote that he would always stand up for Israel's right to exist, but added: "The time has come for Israelis, Palestinians and the international community to read the writing on the wall: The status quo is untenable. Keeping another people under indefinite occupation undermines the security and the future of both Israelis and Palestinians."