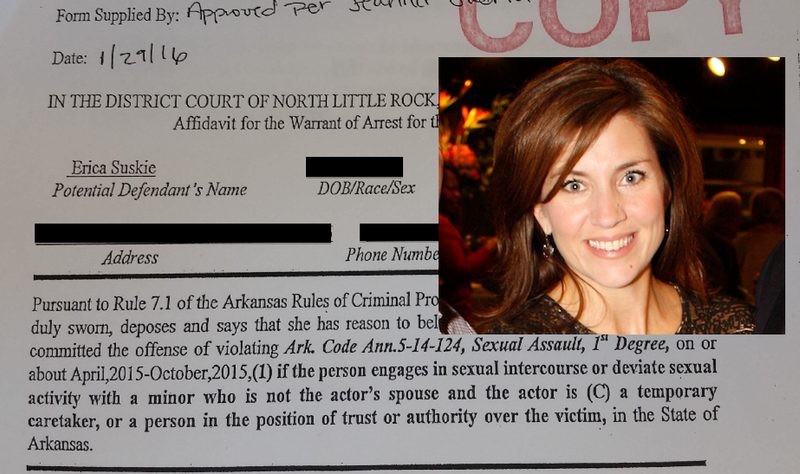 Erica Suskie is shown in a 2013 file photo in front of an arrest affidavit. Suskie pleaded not guilty Tuesday to a charge of first-degree sexual assault. Photo illustration by ArkansasOnline.

A former substitute teacher at Catholic High School for Boys surrendered to authorities Tuesday on a charge of sexual assault in the first degree, prosecutors said.

The Suskies were friends with the family of the alleged victim, who went to school at Catholic High in Little Rock, Pulaski County Chief Deputy Prosecutor John Johnson said.

Catholic High principal Steve Straessle said he reported the misconduct to a hotline, as required by law, when rumors about it developed in October. He declined to offer details about what the rumors suggested had occurred.

He said he made three calls within a three-day period as the rumors evolved, adding he also notified students' parents and banned Suskie from school.

According to a police affidavit filed with the court, the alleged victim told authorities he and Suskie had sexual encounters multiple times between April and October 2015 at her home in North Little Rock and her parents’ home in Sherwood.

The police document states that the sexual encounters began after Suskie asked the youth's mother if the alleged victim could tutor Suskie's son in algebra.*

The affidavit also says two people, whose names are redacted in the report, showed authorities text messages, screenshots of text messages and a photograph of Suskie that indicated the two had a sexual relationship.