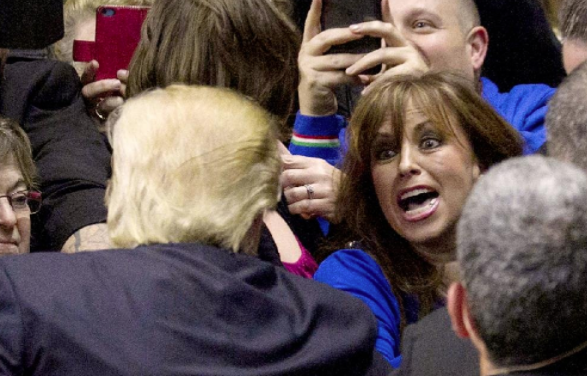 Paula Jones was photographed reaching out toward Donald Trump during a rally in Little Rock Wednesday.

Paula Jones, a former state employee whose allegations of sexual harassment dogged President Bill Clinton throughout his administration, was photographed appearing at a rally for presidential candidate Donald Trump in Little Rock Wednesday.

In a photograph taken by the Arkansas Democrat-Gazette's Benjamin Krain, a woman identified as Jones can be seen in the crowd reaching toward Trump.

A video of the event posted on YouTube shows Trump greeting fans as he walks off the stage. People can be heard yelling "Paula Jones," to focus the candidate's attention toward her.

Jones is then shown saying "I want a selfie," which she then takes with Trump.

Trump and Jones then appear to talk, but what they say cannot be heard over the sound of the crowd and the arena's music.

In a recent interview with Inside Edition Jones said she "likes" Trump, who has used President Clinton's sexual scandals in attacks on his wife, fellow candidate Hillary Clinton.