VIDEO: Couple teams up on big stripers at Beaver Lake 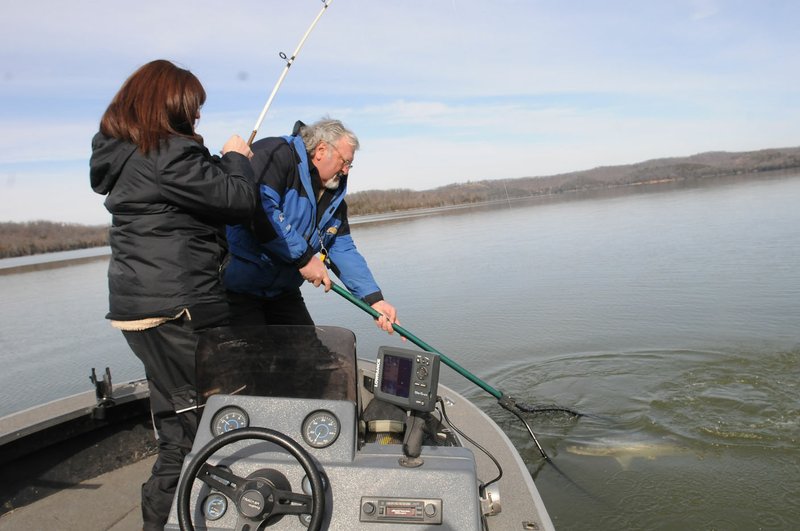 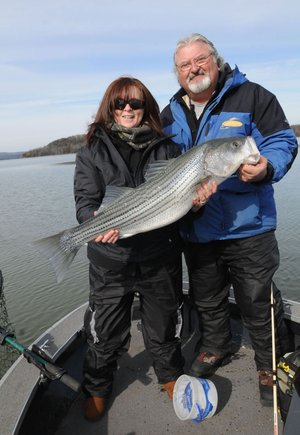 Photo by Flip Putthoff
Denise and Kevin Rivers, husband and wife striper-fishing guides at Beaver Lake, show a striper Denise caught in the Rocky Branch area of Beaver Lake. The couple trolled slowly with large minnows to catch stripers during their 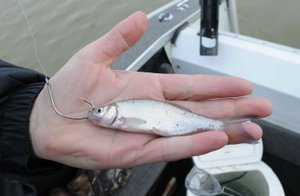 Photo by Flip Putthoff
Large-sized brooder minnows enticed bites from striped bass for Denise and Kevin Rivers at Beaver Lake last month. Kevin inflated a round balloon to the size of an apple to use as a bobber on one line. 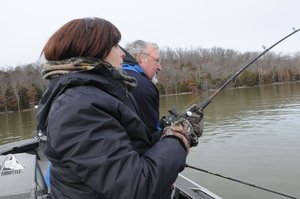 Photo by Flip Putthoff
Denise Rivers hangs on tight while battling a big striper. Kevin Rivers stands by to net the fish. 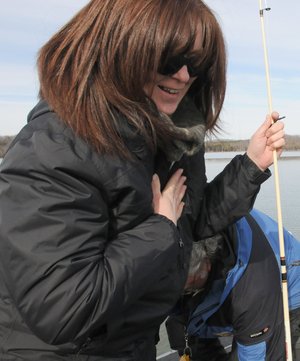 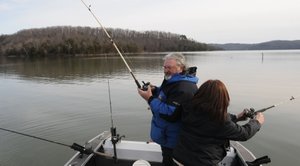 Photo by Flip Putthoff
Kevin gets lines out of the water while Denise fights a striped bass.

The couple taught themselves how to fish for stripers, which are some of the biggest fish in the lake. Stripers can reach 50 pounds in the reservoir. No wonder anglers from around the nation come to Beaver Lake to striper fish. The couple are happy to accommodate customers. Together they run 2 Rivers Edge Striper Guide service out of their home in the Prairie Creek area near Rogers.

Stripers on a plate

In a large bowl, add one box Jiffy cornbread mix and an equal amount of flour. Use less flour for a sweeter taste. Add two eggs.

Kevin recommends using Bad Byron’s Butt Rub for seasoning instead of salt and pepper. Add beer until the batter is the consistency of milk.

If using striper filets, cut out the strip of red meat. Lay the filet out on a cutting board and cut at a 45 degree angle from front to back so the fish pieces are three-fourths to one-inch thick. Dip fish in batter and deep fry in oil that is 325 to 350 degrees. Any hotter and the fish doesn’t cook through. Fry until golden brown.

Denise takes care of the business side, answering the phone, email and booking trips. Kevin does the lion's share of the fishing, taking clients out on safari for big stripers. They're both in the boat occasionally to help their guests catch the fish of a lifetime.

"It's fun to see the excitement on their faces when they hold up that big fish and get their picture taken," Denise said. The husband and wife both know the feeling from catching big stripers on their own.

Both grew up wetting lines in Iowa, but migrated to Northwest Arkansas in part for the fishing.

"I liked the variety of fish here," Kevin said. He got bit by the striper bug when he was fishing for white bass at Beaver Lake. A 12-pound striper bit his hook, way bigger than the 1 or 2 pound white bass he hoped to catch. From there his fishing focus was on stripers.

"There was a lot of trial and error. It's been a long learning process," Kevin said.

The first lesson he learned was the power of a hard-fighting striper. One trip he was using a reel more suited for sunfish than striped bass. A striper bit his minnow, took off on a run and kept going and going. Kevin did his darndest, but couldn't turn the fish, which eventually got away.

"That reel never did work after that," he said.

It was Denise who suggested giving the guide business a try.

"She said I was spending so much time on the water anyway. I thought, why not give it a try," Kevin said.

Both have jobs, so most of their guiding is on the weekends. Kevin's work schedule is flexible enough he can guide on some weekdays. Denise works at UPS in Springdale and Kevin is a security guard in Bentonville.

They had a free Saturday on Jan. 16. The couple launched their boat early at Rocky Branch park in pursuit of striped bass. They were bundled up on the 20-degree morning with little wind.

The morning was a lesson in the basics of Beaver Lake striper fishing. Kevin baited hooks with large minnows on four fishing rods for trolling. The line on one rod was weighted just above the hook to reach down deep. Two other lines had no weight, just the hook and the minnow. The setup lets the minnow swim anywhere from about 10 feet to the surface.

Kevin inflated a round balloon to the size of an apple to use as a bobber and tied it to the fourth line. A balloon is visible far behind the boat, where a conventional bobber would be hard to see. The four rods cover water 30 feet deep to the surface.

They trolled slow enough that motion was barely noticeable. The couple kept an eye on a depth finder on the boat's gunwale. The sonar shows schools of threadin shad, which are a striper's primary food. Stripers follow the shad.

The early morning was still and tranquil until one of the rods took a sudden dip. Denise grabbed it and started reeling. In the boat, the fish looked to be 3 or 4 pounds -- small in the world of Beaver Lake stripers. In fact, it was too small to keep. Stripers must be at least 20 inches long to keep at Beaver. The daily limit is three.

The big flood in late December muddied the water, particularly on the south half of the lake where the couple normally fish in the winter. The water is clearer from Rocky Branch to the dam.

No one was more excited than Denise when another rod bent double. Now she was fighting her own trophy fish. Denise held on to the rod for dear life while Kevin reeled in the other lines to get them out of the way.

Line peeled off the reel in yards, and Denise leaned back hard against the fish. The fishing rod bent clear to the handle.

"Oh my gosh. This is amazing! My heart is racing!," she said.

The yard-long striper thrashed in a froth beside the boat, back and forth. Kevin stood by with the net and nabbed it when the big fish got close enough.

"This is the biggest one I've ever caught," Denise said, admiring the trophy fish. Kevin weighed it on a digital scale while Denise caught her breath. Twenty-five pounds even.

Nothing like fighting a double-digit striper to knock the chill off a cold winter morning.