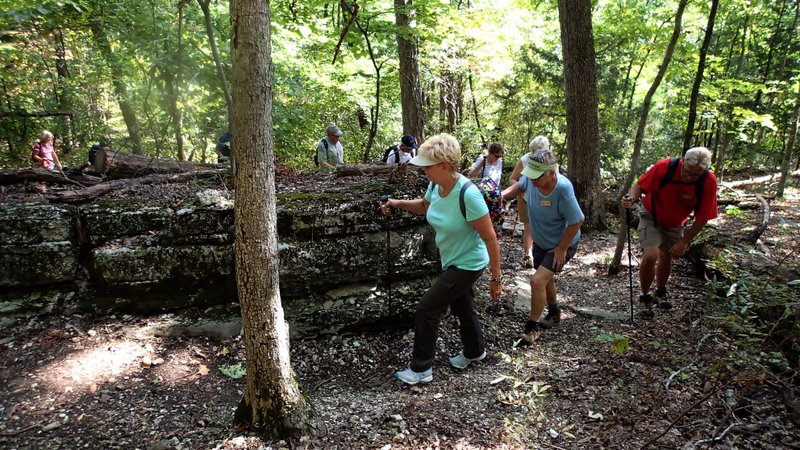 Hikers work their way through rock formations while exploring Lost Ridge Trail on Sept. 16 2015 at Lake Leatherwood in Eureka Springs. Lonely Planet named Northwest Arkansas one of its 10 best places to visit and took note of the hiking in the area.

Lonely Planet on Tuesday included Northwest Arkansas on its top 10 list of places to visit in the United States in 2016.

The company ranked Northwest Arkansas seventh out of 10 on its list, calling the region a "wild surprise, with mountains, crystal blue lakes and green river valleys that give the Rockies a run for their money."

Lonely Planet called Fayetteville an "artsy bubble with a vibrant literary scene," Bentonville an "international town with an array of good eats" and Eureka Springs a place with a "beautiful historical core" and premier hiking spots.

Philadelphia was named the top place to visit in the U.S.

"Philly's on a roll right now," the travel guide company said in a statement. "The city is experiencing a transformation to its urban core, yet retaining its deep American history and uniquely gritty flavor.

The company noted that Philadelphia hosted Pope Francis in September and will welcome the Democratic National Convention this summer. In November, it was named the country's first World Heritage City.

Last year, the New York City borough of Queens got an outsize dose of publicity when Lonely Planet picked it as the No. 1 U.S. destination for 2015 — a somewhat surprising choice given that Queens' sister borough Brooklyn tends to get the lion's share of attention from hipsters and tourists alike.

Lonely Planet said it picks the "top 10 most exciting, intriguing and up-and-coming" destinations for the list, and called Philadelphia "a national treasure."