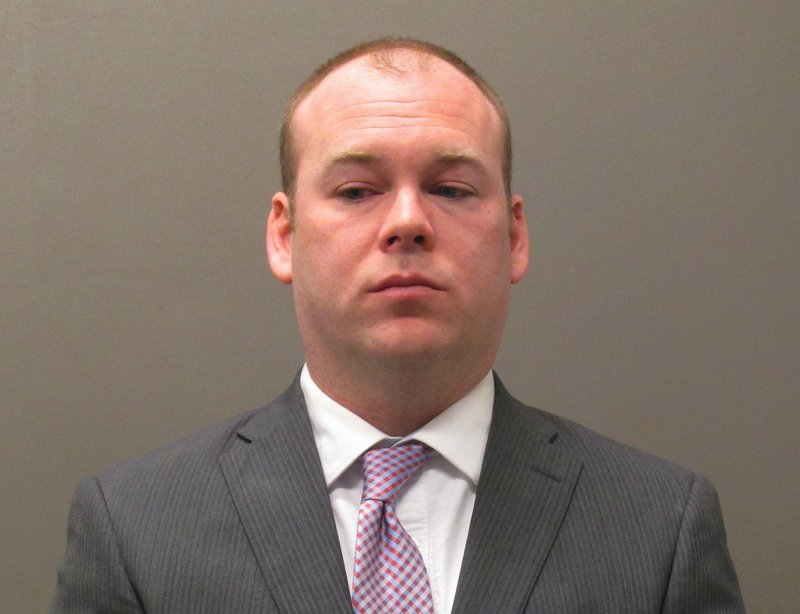 Garland County Circuit Judge Wade Naramore, 36, faces a charge of negligent homicide in the hot-car death of his 17-month-old son, Thomas Naramore. He was booked into the Garland County jail about 11:33 a.m. Thursday and released about 11:41 a.m. on $5,000 bond.

More than six months after the hot-car death of his toddler son, Garland County Circuit Judge Wade Naramore faces a class A misdemeanor charge of negligent homicide in the case, according to court records.

Naramore, 36, was arrested after an investigation into the death his 17-month-old son, Thomas Naramore, who was found July 24 in a vehicle at Fairoaks Place and James Street in Hot Springs.

Second Judicial District Prosecuting Attorney Scott Ellington said in a statement that Naramore surrendered to Hot Springs police Thursday after an arrest warrant was issued earlier in the day.

He was booked into the Garland County jail and released a short time later on $5,000 bond, Ellington said.

A class A misdemeanor carries a maximum penalty of up to one year in jail and a fine of up to $2,500.

The state Judicial Discipline and Disability Commission is seeking temporary suspension with pay for Naramore and will meet Tuesday to consider the possible sanction, executive director David Sachar said.

Ellington, who was assigned as a special prosecutor in the case in August, did not meet a self-imposed deadline last month for a decision regarding possible charges.

At that time, Ellington said he and his staff still had questions related to collected evidence in the case.

Officers arrived on scene about 3:13 p.m. July 24 after receiving calls from Wade Naramore and his father-in-law, according to the Hot Springs Police Department.

Responding officers observed a maroon Toyota Avalon parked at Fairoaks Place and James Street with the driver's door open and no one near the vehicle, according to the police affidavit. A homeowner at 120 Fairoaks Place then walked outside and directed authorities inside the residence.

Inside the home, Naramore was found holding his son, yelling "No my baby! No my baby," according to police.

A preliminary investigation found that the toddler died from "excessive heat." Temperatures were approaching 100 degrees that day, according to National Weather Service records.

Naramore spoke with Hot Springs police Nov. 23, describing how that day unfolded, including that he "had a court case on this day he was worried about," according to the affidavit. His attorney, Patrick Benca, was present.

Naramore told police that he and his son "said their morning prayers" while he was traveling to work about 8:15 a.m. July 24. During the drive, Naramore said he also stopped for breakfast at a McDonald's, adding that it was unusual for him and that he usually prepared breakfast at home.

After leaving work early that day, Naramore said, he ran some errands and went home. That afternoon, he left his residence to pick his son up from day care.

"As he turned a corner, he heard a noise in the rear of his car which caused him to turn around," the affidavit states. "As he turned around, he noticed Thomas was in his car seat and had not been dropped off at day care."

At that point, Naramore said, he "immediately stopped the car, got Thomas out of his car seat and called for help," according to police. He told authorities that his son had been in the car for about five hours.

Matt Campbell, a Little Rock attorney and blogger, successfully petitioned for access to the 911 calls made July 24. The calls were released after a court order from retired Circuit Judge Sam Bird in November.

No one had been charged in Thomas Naramore's death until Thursday.

A phone call to Benca for comment on behalf of Wade Naramore was not immediately returned Thursday afternoon.

Check back with ArkansasOnline for updates and read Friday's Arkansas Democrat-Gazette for full details.

Shea Stewart of the Arkansas Democrat-Gazette contributed to this report.

Read the probable cause affidavit