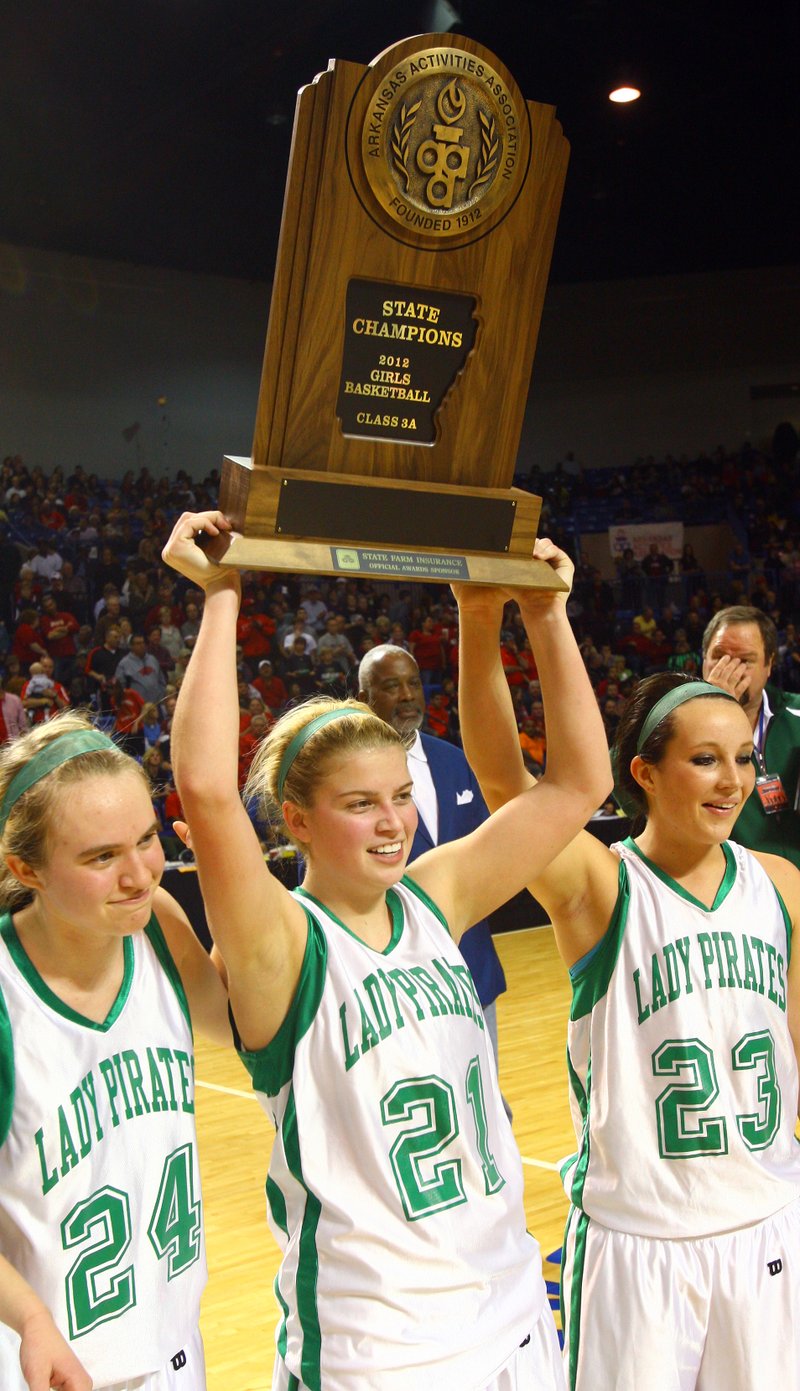 GREENLAND -- Alan Barton emerged from his office and walked quickly across the Dee Lee Gymnasium floor. Barton, the girls basketball coach at Greenland, stuck out his hand. 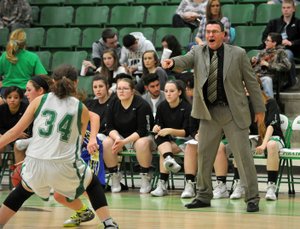 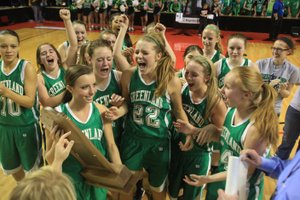 Photo by Rick McFarland
Greenland’s players get the trophy March 7, 2013, for winning the Class 3A State Championship game against Jessieville at Barton Coliseum in Little Rock. Some of those shown are (front row, left to right) Morgan Miller, Kari Scott, Kelsey Vaughn (22), Anna Rogers and Zoey Smith.

Greenland girls have won six state titles since 1999. Clay Reeves was the coach when the Lady Pirates won their first three state championships, and Alan Barton, a former assistant coach under Reeves, has won the past three state titles.

For more on Alan Barton and the Greenland girls basketball program, see the full video at nwadg.com and arpreps.com.

"Baby" is Barton's signature greeting for everyone -- man, woman, player. It doesn't matter. Barton, who is also an elementary school principal at Greenland, is a one-man welcoming committee.

Sporting a black Greenland Lady Pirates pullover, greatness encircles him. High on the gymnasium walls, Kelly green and white banners detail the school's dominance in girls basketball for the past 15 years. Hardware from the program's six state championships since 1999 stuff the trophy cases in the foyer.

Barton said while the winning is nice, that's not his ultimate goal as a coach and leader of one of Northwest Arkansas' most successful girls basketball programs. Success to him goes beyond the hardwood court.

"Winning, developing habits, being a strong personality, that's all part of it," Barton said. "But for them to tell me I've made a difference in their lives, man, that's everything."

Anna Rogers was a star player for Greenland from 2012-2014, leading the team to a pair of state championships as a gritty, do-whatever-it-takes point guard.

Rogers is playing at Carl Albert State College in Poteau, Okla., and has signed to continue her career at Arkansas-Fort Smith next season.

"If you ask Coach B, he'd tell you he doesn't consider himself a coach, but a motivator," Rogers said, via email. "He's right. He is a motivator, but he has been way more than a basketball coach for a lot of players. He's been a life coach, mentor and father figure as well. It's never been about him, but about us."

Greenland's success started in the late 1990s when Clay Reeves was building a powerhouse in Washington County. Reeves has won five state championships at both Greenland and Greenwood. When he arrived at Greenland, Barton was coaching boys and overseeing the town's pee-wee sports program.

"Coach Reeves came up to me one day and said he liked what I was doing with the boys and said he wanted me to join his staff to help with the girls," Barton said.

The girls program skyrocketed to success, dominating Class 2A girls basketball, winning state championships in 1999, 2000 and 2002.

Barton came to Greenland after teaching in Wickes, where he coached under Lendell Martin, and later El Dorado. His wife was a Northwest Arkansas native and wanted to return to the area in the mid-1990s.

"I went down old (U.S.) 71 and put in applications everywhere on 71 from Mountainburg all the way up to Bentonville," Barton recalled. "Greenland was the first to call."

When Reeves left for Greenwood, he encouraged Barton to seek the head coaching job, and Greenland school leaders quickly agreed.

Ashley Hipps was a Lady Pirate from 2010-2012 and starts at the University of the Ozarks in Clarksville. She remembers the team losing in the first round of the state tournament in 2011, something Greenland rarely did. That served as a wake-up call for the team, and Hipps said the team used that loss as motivation for grueling offseason workouts in 2012.

"We got the mindset that we would not let that happen again," Hipps said. "I just remember that we worked so hard that summer, and when the season started, we started winning games that the year before we didn't win. I think we developed a deep bond after that 2011 season didn't go the way we wanted it to."

Barton creates an extremely difficult nonconference schedule that often includes games against Class 6A and 7A powerhouses. His belief is playing those teams toughens his teams for the long postseason run. The strategy works, Rogers said.

"Having gone through the program and been coached by Coach B since the seventh grade, I can say it's given me some of my best qualities to this day," she said. "The mental toughness, determination and perseverance in adversity that I posses today is all rooted in the Lady Pirate tradition."

Barton credits some of the area's most successful girls basketball coaches with having a great influence on him and the way he runs his program. He mentions Huntsville coach Charles Berry, Prairie Grove coach Kevin Froud and Reeves.

But Reeves is the one who had the biggest influence on him after the two coached together for so many years.

"He gave me a chance to be a part of his program, starting with pee-wee, AAU basketball with his teams in the summer," Barton said. "He was the one that convinced me that I could continue what he started."

Kim Crown, the leader of last year's state championship team and a senior on this year's squad (18-6 overall, 11-0 in the 3A-1 West Conference), said she moved to Greenland as a seventh-grader and immediately wanted to be part of the basketball program.

Crown said she craved the tough love Barton showed his players, driving them to achieve greatness.

"I used to be weak," Crown said. "Like when I got told to do something, I would cry. I'm not a crier anymore. I know what I want, and I know how to get it."

The success of the Greenland girls program does not start at the high school level, Hipps said. The girls who come to watch their favorite team learn early as Barton still remains actively involved in the youth and junior high programs.

"The little girls, they look up to you when you are a Lady Pirate," Hipps said. "For us, it's all about the name on the jersey."

With six state titles, Greenland goes into every game knowing it will get its opponents' best shot. That is a target the team wears with pride, Barton said.

"They know walking in the gym every day and seeing on the walls and trophy cases the tradition and know there are expectations, and they also know that I put a target on them because of my coaching style," Barton said. "A lot of fans think I'm really hard on them, but the girls know it's my way to get them to go where they haven't gone and be challenged to do so."

"He pushes us very hard, and he makes us stronger," Wright said. "But we know exactly what he expects, and we get it done."

Barton remains humble despite the success and considers himself "just an elementary principal that was in the right place at the right time."

For Greenland girls basketball, it could not have worked out any better.