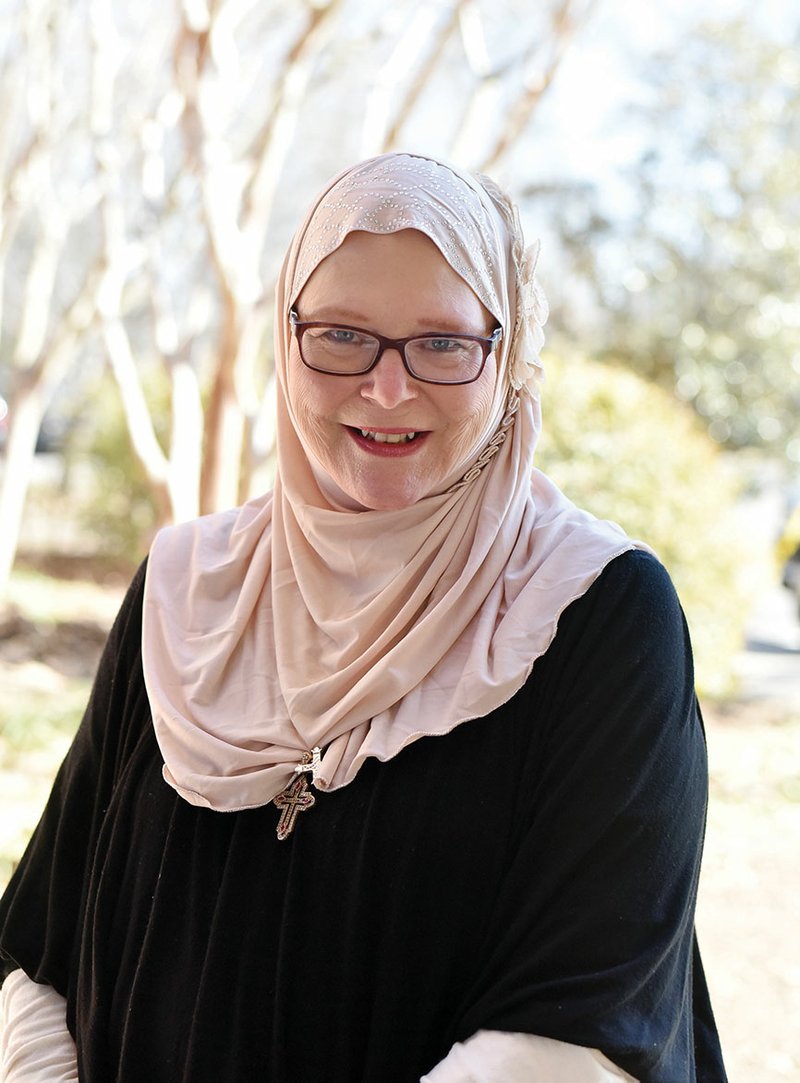 Every morning when Nancy Allen gets dressed, the last thing she does before she leaves home is to put on a hijab, a headscarf worn by Muslim women.

But Allen is a Christian.

“I’m supporting the Muslim-American community and freedom of religion,” she said.

Allen, a member of St. Peter’s Episcopal Church in Conway, said she decided in December to start wearing the hijab.

“I sort of think I was doing it as an Advent meditation, and it turned into something else,” she said. Allen said the Syrian refugee situation was raging at the time, and so were Donald Trump’s remarks about Muslims. In December, the presidential candidate called for barring all Muslims from entering the country for a period of time.

“We were seeing the kind of fascist-toned remarks here in our country that were going on during World War II — and we also incarcerated our own Japanese citizens,” Allen said.

Allen checked with a Muslim friend before she took a stand in this way.

“That was the first question: Is this going to be insulting? I asked a Muslim Facebook friend who lives in Malaysia, … and everything I received back was positive,” Allen said.

Allen, who is the adult services and reference librarian at the Faulkner County Library in Conway, ordered her first headscarf online at hijabstore.com.

“It came in the mail, and I put it on, and the very day I wore it to work, a lady in the lobby came up to me and started speaking in Arabic,” she said. Allen told the woman she didn’t speak Arabic and was a Christian wearing the hijab in support of Muslim-American women.

“She said, ‘I am so grateful to you for doing this. I am Muslim; I am married to an American, and I am afraid to wear the hijab. I’m afraid people will think I’m a bad person,’” Allen said.

The woman was the first of many people to thank her for wearing a hijab, Allen said.

“I can’t tell you how many people have told me things like, ‘On behalf of my mother, who is afraid to wear her hijab, … on behalf of my sister, I really appreciate the support,’” Allen said.

She also is acutely aware of the furtive glances, or people who avoid her because she’s wearing the hijab. A co-worker at the library told her that a patron said he hoped they were keeping “that raghead in the back.”

Allen wonders what people think when they see her.

Allen said she has gotten some comments on social media accusing her of cultural appropriation, which is the adoption or use of elements of one culture by another. It can have a negative connotation.

“I can understand the cultural-appropriation critique, but I also appreciate Nancy’s motives,” said Jay McDaniel, professor of religious studies at Hendrix College in Conway. “It’s my impression that you’re not going to get a single response to that on the part of Muslims. I think most Muslims, all things considered, appreciate what Nancy’s doing.”

Sophia Said of Little Rock, who is Muslim, said she was aware that Allen is wearing a hijab, and she supports Allen.

“It’s a beautiful thing,” Said said. “I don’t think accepting and cherishing and celebrating other people’s faith takes us away from our own faith.”

Said is director of programs at the Interfaith Center of St. Margaret’s Episcopal Church in Little Rock.

“Hijab is a very empowering experience for Muslim women,” she said. “It helps us look modest but also makes others look and focus on who we truly are from the inside, our real and intellectual selves, since it takes attention away from the outward and physical beauty.”

As far as the criticism of cultural appropriation, “I really do not know where the cultural boundaries are nowadays,” Said said with a laugh. “Culture is an ever-evolving organism.”

Allen said she has five amira hijabs, which she described as “a tube sock” with an opening for the face, because they are easier to put on than ones that have to be wrapped. Allen said her daughter also bought some pashmina scarves for Allen to wear.

Allen said at the first of January, she was questioning her decision to wear the hijab.

“I started kind of blogging about it through my Facebook page, and I had just put in a remark, ‘I feel like an idiot; I feel like I’m pulling a teenage stunt. What is the point? I feel pretty stupid.’”

Allen said a friend of hers posted: “I can’t wait to see your face when you find out what kind of response you had.”

The friend was ordering Turkish coffee from the Grand Bazaar in Instanbul, and when he gave his address, the Turkish vendor asked, “Do you know a librarian in your town named Nancy Allen?” The man said he had just heard a sermon about Allen in the mosque he attended.

“He said, ‘Nancy Allen is a daughter of Abraham and represents the pillars of Islam, not because of what she has on her head, but what she has in her heart,’” Allen’s friend said. The vendor sent Allen a jeweled cross to thank her.

Allen said she wants people abroad to know “the noise that makes the news media overseas is not emblematic of every American, just the way that Muslims want us to know they’re not all terrorists. It’s nice to know we’re not all bigots.”

Allen isn’t sure how long she’ll continue to wear the hijab.

“It looks like I’ll probably go right on through Lent, since Lent has begun, and I’m still covered,” she said. “Trump won in New Hampshire; that makes me want to wear it longer.”