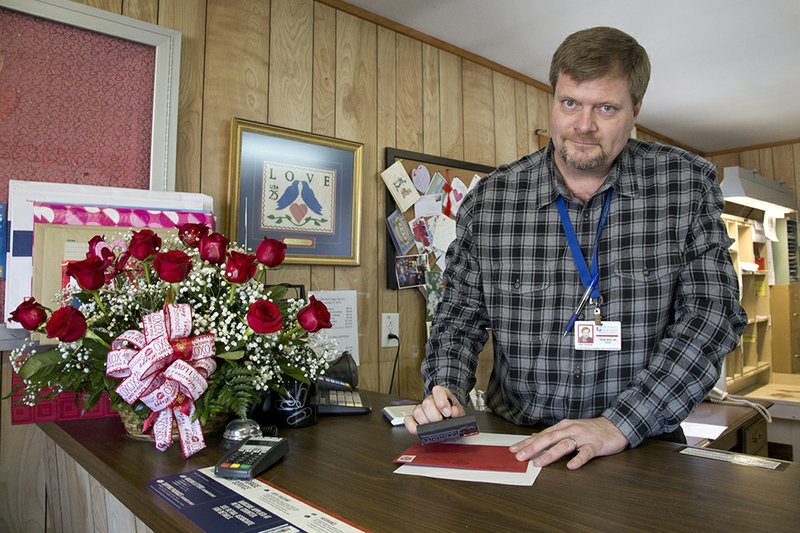 Postmaster John David Parham stamps a letter with the specialized Romance handstamp, only available at the Romance post office.

The “Love Station” is open and doing business at the Romance post office, and hundreds of love notes are being handstamped each day.

The special touch and extra efforts are worth it, said Anthony Reed, postal support employee at the Romance post office.

“It brings a smile to their faces,” he said.

In 1990, the Romance post office was the first in the country to sell the Love Stamp, with bluebirds and a heart in the design, postmaster John David Parham said.

There was a lot of hoopla the day the Love Stamp came out, with television cameras rolling and people lined up to get into the small building, he said.

The post office’s tradition of handstamping “Sending Love from Romance, AR 72136” is known across the U.S. and worldwide.

“I just got a call from California,” Reed said on Feb. 4, two days after the new handstamped design for 2016 came out. “He wanted to know if we were still doing mailing.”

The most out-of-reach requests thus far have come from China and Japan. A man sent a coupon for postage.

“He is a stamp collector, a philatelic,” Reed said.

Stacks of white envelopes with red ink, held by rubber bands or placed in big envelopes, are carefully undone, and the stamping begins.

Just to have a missive handstamped is a treat and treasure itself. Parham said the former handstamp had been used several years, and he decided it was time for a new look. So he consulted Conway artist and designer Jessica Kelley.

“She knocked it out of the park,” Parham said.

The record number of stampings for the day has been 5,000, Parham said. He even got his wedding invitations hand-canceled and mailed at the location nine years ago.

“I love it!” he said of the excitement generated at the post office this time of year.

Many mail wedding invitations, then step outside to take a selfie in front of the building, Reed said, and the post office has been used as a wedding location. Although no weddings are on the books right now, one never knows when that request could pop up as it has in the past.

This place is a stamp collector’s heaven with its bevy of stamps, especially those geared to love, and the post office itself is decorated appropriately. Reed purchased a huge bouquet of red roses to flank the counter. There are red sequined hearts strewn about and a red heart mobile hanging in a corner. The packaging or shipping teddy bear for sale is holding a heart saying, “I Love You.” A local man, Ross Stickland, created a needlepoint of the Love Stamp that hangs on the wall.

How the town got its name is a question posed to Harvey Jobe, whom postal officials here called “the historian.” Jobe said that in the 1880s, the name for the area was proposed to be “Kentucky Valley” because of the number of settlers from there. But that name was turned down.

Jobe said there was an old spring, and everyone sits around the spring and “sparks” — an old-fashioned term for modern-day dating. A schoolteacher suggested the area be called Romance, and the name stuck.

Today, the volume of business at the post office is affected by the town’s name.

“It really increases during this time of year,” said Daisy Kurck, one of the town’s three rural mail carriers. She sees it on her route of about 400. There will be special notes with the plea, “Please have it stamped.” Kurck recalled when there were children from a day care who came to visit the post office each year and brought valentines to be stamped for their grandparents. She also remembers one elderly gentleman who came in the post office and asked the clerk at that time, Holly Owen, to go buy his wife some candy for the special day, and Owen did that for him.

Reed said the extra efforts at this time — “seeing what everyone is doing, the thought and effort they are putting into making it more special” — are what he likes.

The handstamping goes from Feb. 2 through Feb. 15, if needed, Parham said.

One time Jobe was bush-hogging at the post office, he said, and a lady drove up to find the post office closed. She frantically asked, “What am I supposed to do with my valentines?” Jobe told her to put them in the outside box, having no idea how many she had. And the next day, postal workers were greeted with a box stuffed and running over with cards.

Will Parham give his valentine a gift on Feb. 14?

What about Reed? His wife is the opposite of Parham’s in the jewelry craving, Reed said. But he said he wouldn’t want to spoil the surprise by having what he got her printed in the paper.

The Romance post office is at 292 Arkansas 31 N. in Romance. Parham requested that people not leave their love letters or cards outside in the blue box if they want the mail handstamped, for mail from the blue box goes straight to Little Rock.