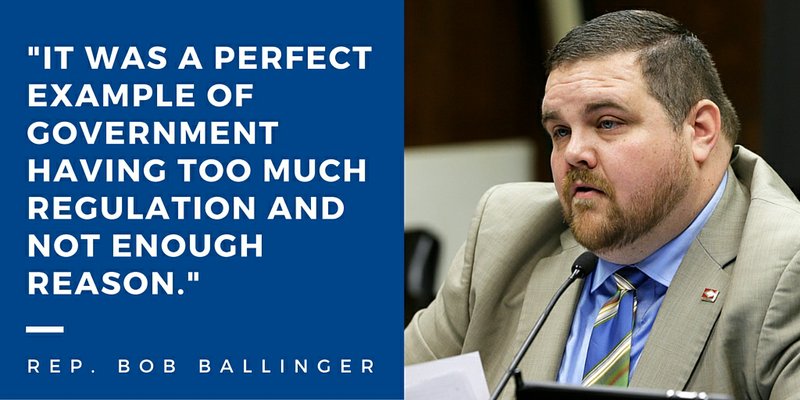 A soup ministry in Carroll County was shut down for a week because of a state rule regarding food preparation.

But A Cup of Love Ministry resumed operation last week after a state representative notified the Arkansas Department of Health that the closure violated Act 975 of 2015, also known as the Religious Freedom Restoration Act.

"I think that the matter is resolved and taken care of now," said state Rep. Bob Ballinger, R-Hindsville. "It was a perfect example of government having too much regulation and not enough reason. For any government to try to shut down a person who's just trying to feed the homeless, it's pretty foolish. The Health Department was very willing to work with us."

Ministry founder Chuck Jarrett said an employee of the department told him that food must be prepared in an institutional kitchen and served in the same building.

Chuck and Pattie Jarrett, who run A Cup of Love Ministry, make their soup at home near Eureka Springs and take it to three different locations, depending on the day, to feed those in need.

"I feed about 80 people a day," said Chuck Jarrett.

The ministry has been in operation for 2½ years. Jarrett said he and his wife are nondenominational Christians.

On Monday, Jarrett was offering French onion, rabbit stew, chili mac, minestrone, and chicken and rice soups. On other days, the soup choices can include trout Alfredo, deer stew, wild boar and emu.

Jarrett said he didn't contact Ballinger about the situation, but others did.

"I think it's a good example of where the Religious Freedom Restoration Act is practically effective -- where it is used and implemented to protect a person's religious rights and to help people," said Ballinger.

Opponents of the act had argued that it could be used by business owners to discriminate against gay people on religious grounds.

Jarrett said the ministry is looking for a building in Berryville where they can provide three meals a day, six days a week. He hopes to branch out then with similar facilities in Eureka Springs and Green Forest.