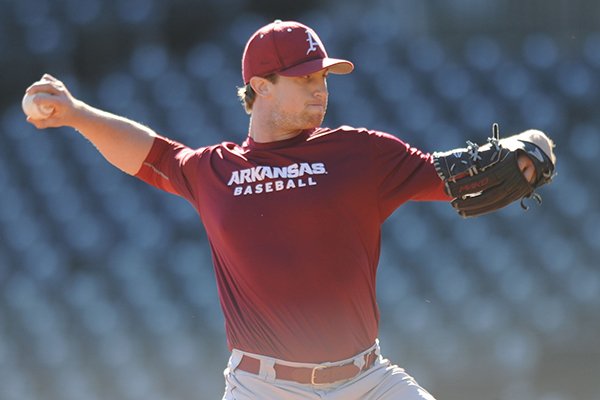 Dominic Taccolini of Arkansas delivers a pitch Friday, Jan. 29, 2016, during practice at Baum Stadium in Fayetteville.

FAYETTEVILLE -- The day after Dominic Taccolini pitched his last game of 2015 was one of the toughest for him.

Taccolini allowed 4 earned runs in 2-plus innings in a 10-0 loss to Florida that eliminated Arkansas from the SEC Tournament in Hoover, Ala., on May 22.

"The back of my arm and my armpit, it felt like someone was sticking scissors in it," Taccolini said to describe the pain under his right shoulder. "I thought it was a lat strain.

"I couldn't even lift my arm. Then my arm swelled up really bad and that freaked me out a little bit."

Taccolini wound up going to the hospital in Oklahoma City to treat a blood clot and eventually had part of his top rib removed while his teammates were storming through the Stillwater Regional with a 3-0 record en route to the College World Series.

Taccolini will take the largest step yet in his rehabilitation Friday as he takes the mound as Arkansas' opening-day starter against Central Michigan, which was picked by the league coaches to win the Mid-American Conference's West Division.

"To start opening day is just a testament to how hard I worked and how much the coaches believed in me, which was good to see," said Taccolini, who finished last year with a 6-4 record and 4.32 earned-run average.

The Razorbacks hope a pitching staff that limped into Omaha after ace reliever Zach Jackson slammed the door on a 3-2 victory over Missouri State in the Fayetteville Super Regional has mended mentally and physically as the 2016 season begins .

Taccolini, a 6-3 junior, said his shoulder feels better than it did last season and he is hoping to throw 80 to 85 pitches Friday. Sophomore right-hander Keaton McKinney (6-2, 3.21), who is coming off surgery for a hip injury that impacted his final month of 2015, has drawn the starting assignment for Sunday after wiry 6-3 freshman right-hander Blaine Knight of Bryant throws Saturday.

"I was a totally different pitcher than I was before," McKinney said of his work down the stretch last season. "I used to be more of a power pitcher and I had to work with what I had every day. It was tough."

"I'm ready to get back out there and have what I had before the surgery with a little bit more [velocity] and to have a third pitch to add to that, it'll be exciting."

McKinney said his third pitch, a slider, has to be in place to complement his fastball and change-up.

"Coach [Dave] Jorn's been on me, working with me on it and I have to use it this year. There's no two-pitch mix anymore."

McKinney said his recovery from hip surgery is not at 100 percent yet, but he's progressing right on schedule and would probably have a maximum 80-pitch count Sunday.

Knight had a strong performance in Saturday's intrasquad work against the would-be starters, allowing one run in 4 2/3 innings.

"He pounds the zone and so far he's definitely been pitching above his class," Taccolini said.

Knight said his approach starts with a fastball in the high 80s and low 90s mph.

"A slider and a change-up to back that up," he said. "Just not overpowering, but I can run it up there when I need to. But mainly sit 88-90 and just let sink take over."

Van Horn said Knight has been consistent enough through the fall and spring to earn a spot in the rotation, and that he wanted McKinney to have another day of rest before the season starts.

"Really no rhyme or reason for the order, but it is nice having a guy with a little experience going the last day because they have a good team," Van Horn said.

Junior right-hander James Teague (6-4, 3.36) pitched four innings in the Super Regional finale, but he missed the College World Series with a stress reaction in his right [pitching] elbow that did not need surgery.

Teague had some soreness last week and did not pitch in intrasquad work on the weekend.

"Nothing serious, precautionary time and I don't anticipate missing any games," said Teague, who is expected to be a key set-up man for Jackson (5-1, 2.10, 9 saves), who was named to watch lists for the Golden Spikes Award and the Stopper of the Year Award this week.

Jackson, who has expressed an interest in returning to the starting rotation, will open the year at the back of the bullpen, where he had a dominant run to finish out 2015.