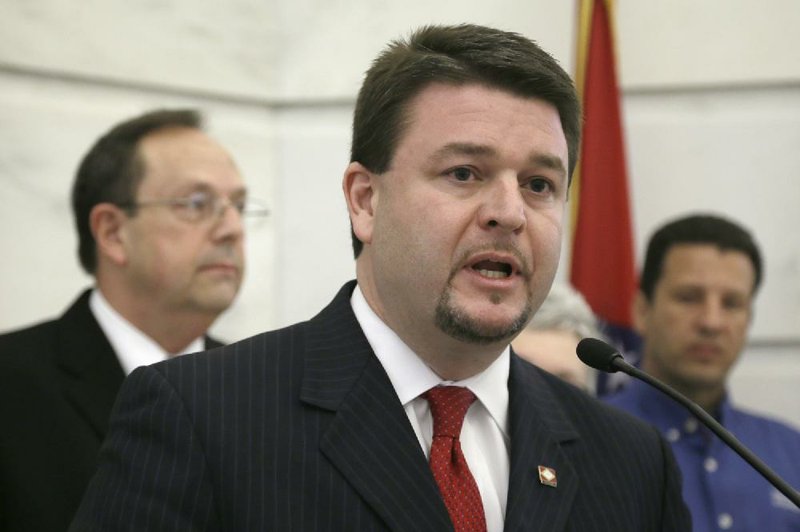 State Sen. Jason Rapert, R-Bigelow, is using an online fundraiser to privately finance a Ten Commandments monument after the Legislature last year passed a law allowing him to place the rules from the Bible on state Capitol grounds.

A GoFundMe page set up Wednesday in Rapert's name has received $950 toward a fundraising goal of $16,635. Nine donors had contributed toward the project as of Thursday afternoon.

The website states that $1,000 in donations had been received for the monument before the online fundraising efforts.

Nearly $15,700 is needed in two weeks, factoring in the recent online donations, to keep the project on schedule, according to the page.

The monument project has a cost breakdown of $12,635 for completion, transportation and installation, as well as $5,000 for "incidental expenses," the GoFundMe page's fundraiser description states.

In April, Gov. Asa Hutchinson signed into law the Rapert-introduced bill that allows a privately funded Ten Commandments monument to be placed on state Capitol grounds.

The American History & Heritage Foundation Inc., a nonprofit registered to Travis W. Story of Fayetteville, is listed as the monument's private sponsor.

Its incorporator filed with the secretary of state's office in October of last year, records show.

The state Capitol grounds project is the "first of many" across the U.S. that the nonprofit has pledged to sponsor, according to the GoFundMe page.