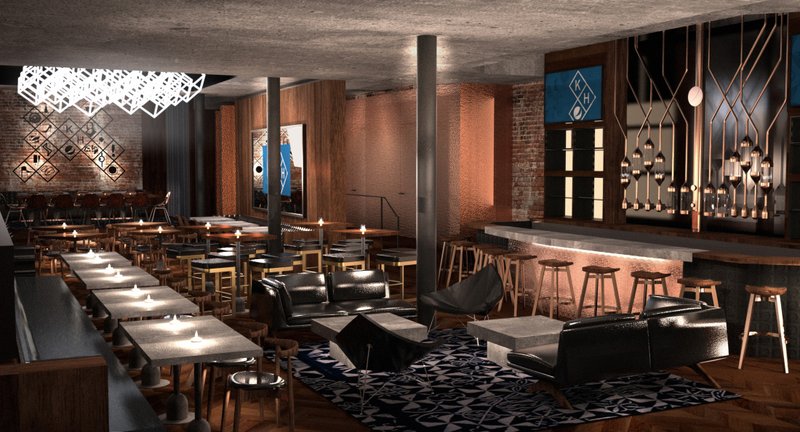 This rendering provided by PepsiCo shows the concept of what Pepsi's Kola House, the first experimental kola bar, restaurant, lounge and event space to open in the U.S. market, is expected to look like. This first-of-its-kind hospitality venture is set to open its doors in spring 2016, with its flagship location in New York City's Meatpacking District.

NEW YORK -- Soda giants Coke and Pepsi are trying to rehabilitate their cheap Big Gulp image with redesigned cans, new flavors and changes in the language they use to promote their products in an attempt to attract Americans who keep cutting back on sugary fizz.

On the menu for Coca-Cola is the expansion of the distribution of Mexican Coke, which is sweetened with sugar instead of high-fructose corn syrup. Pepsi is pushing "craft sodas" and even plans to open an eatery "honoring the kola nut" in New York City in the spring.

A news release for Pepsi's Kola House restaurant last month was peppered with marketing buzzwords, and said the lounge would have a "resident cocktail curator" and "artisanal menu."

Soda remains a big business, with the familiar sizes like 12-ounce cans and 2-liter bottles still accounting for the vast majority of the market. But Americans keep reaching for alternatives, with soda facing a proliferation of competitors and being blamed for fueling obesity. Between 2000 and 2014, U.S. soda-sales volume fell 14 percent, according to industry tracker Beverage Digest.

If they're selling less soda, Coke and Pepsi at least want to charge more for it by giving it more cachet.

It's why PepsiCo in 2014 introduced Caleb's Kola, which comes in a glass bottle with the words "Honor in craft." At a Beverage Digest conference soon after, Chief Executive Officer Indra Nooyi said soda had lost some of its "cool factor" and that drinks like Caleb's were helping bring it back.

PepsiCo also introduced Mountain Dew Dewshine that comes in a glass bottle and is made with sugar instead of high-fructose corn syrup, and displayed a soda called 1893 at a trade show. Like Caleb's, 1893 is a reference to Pepsi's creation by Caleb Bradham in 1893.

Dibadj said the focus on craft sodas is an attempt to emulate what happened in the beer industry, where craft beers have been the main driver of growth. But Dibadj thinks craft's potential on soda may be more limited, since soda's problem for most people isn't taste, but the calories.

There is no definition for what makes a soda "craft," but the trend is characterized by traits such as glass bottles and ingredients that are seen as more wholesome. Jaime Jose, a 21-year-old student from New York, doesn't drink soda but said she's tempted to buy the glass bottles of Coke as an occasional treat.

"It's that retro thing of having a story behind it," Jose said.

It's also presenting its flagship soda to fit craft sensibilities. Sandy Douglas, head of Coke North America, said last year that Coke's packages by the end of the 1990s were all "huge" and "boring."

But he said the newer aluminum bottles and mini-cans were winning back customers, particularly those with more earning power. He also said the smaller sizes were in line with the desire for more modest portions.

Coke Chief Financial Officer Kathy Waller said she thinks such alternative sizes could "easily go to 30 percent" of sales, up from about 15 percent last year.

Mexican Coke is also expanding distribution and enjoying double-digit volume growth although it remains relatively minimal. The glass bottles and sugar that made it popular among certain circles are in step with the desire for "authentic" foods that marketers say people increasingly want.