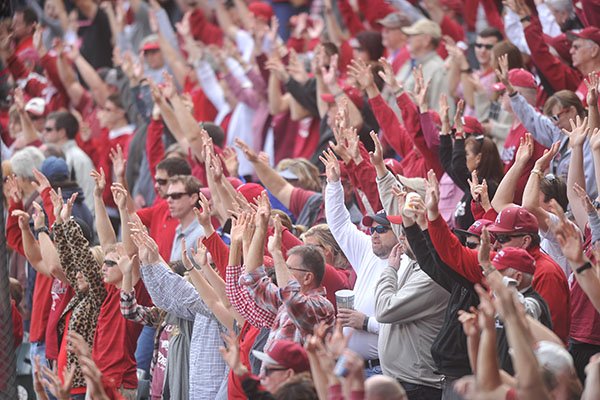 Arkansas fans call the Hogs during a game against Central Michigan on Saturday, Feb. 20, 2016, at Baum Stadium in Fayetteville.

The Razorbacks sold 28,492 tickets for the series and had a combined actual attendance of 24,032.

Arkansas' previous record for opening weekend ticket sales was 26,084 for a series against Villanova in 2012.

"I appreciate them coming out this early in the season when...high school basketball and college basketball is still going on," Arkansas coach Dave Van Horn said. "There's a lot to do around the state, so for them to come out shows they enjoy our stadium, enjoy our team and enjoy the way things have gone over the last few years. Incredible numbers."

Arkansas sold 11,341 tickets and had an actual attendance of 10,219 for Saturday's game against the Chippewas - both single-game records for an opening series.

"I was talking about it on the radio," Arkansas shortstop Michael Bernal said. "He was like, 'What if half of that crowd on Friday had shown up?' I said, 'That would have been a great crowd, too.'

"There's something about this university that sets it apart from everybody else. The fans are so passionate and the people here love baseball and they love the Razorbacks, and it's really obvious."

The previous best six-game stretch was 59,445 tickets sold for series against LSU and Texas A&M in 2013.

With unseasonably warm weather across the South, attendance was up at several Southeastern Conference stadiums on opening weekend.

Mississippi State had an opening-day record 9,413 for its game against Florida Atlantic on Friday and Alabama had near-capacity crowds of 6,449 for two games against Maryland.

The Crimson Tide reopened Sewell-Thomas Stadium on Friday after it underwent a $42.6 million renovation that forced the team to relocate for the 2015 season.

Texas A&M had 6,806 for its Friday game against Hofstra, which was the third-largest for an Aggies' opener at Olsen Field.