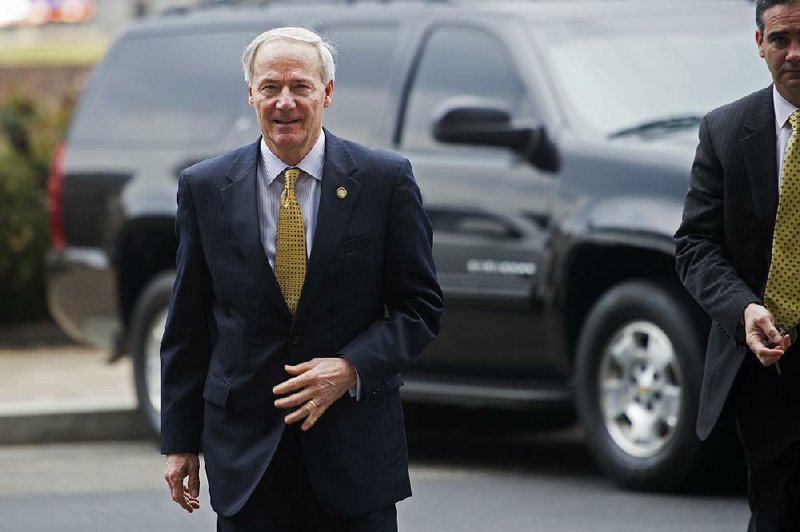 Hutchinson and Inslee, who are in Washington, D.C., for the National Governors Association winter meeting, will lead the campaign. It will work to persuade states to offer high-school computer science classes, train educators to teach computer coding and create statewide computer science standards for kindergarten through 12th grade.

Arkansas was the first state in the nation to mandate computer science courses.

Margo Day, vice president for U.S. education at Microsoft, said computer science education is "equipping our children with the skills that they need for the future."

"Computer science is one of those modern skills that we all need to embrace because that's what our economy's going to be based on," she said.

She said Hutchinson and Inslee are both "amazing leaders in computer science."

Hadi Partovi, founder of a nonprofit computer education group called code.org, referred to Hutchinson as "one of the heroes of the computer science movement" for his leadership.

During his 2014 campaign for governor, the Little Rock Republican called for requiring the state's high schools to offer at least one computer science course.

Shortly after his election, the state Legislature passed legislation that did just that; the governor promptly signed it into law. The state also changed its standards, allowing computer science to count as one of the math or science courses needed to graduate.

The state set aside $5 million to train teachers and launch the program.

Since then, more than 4,000 students have signed up for the classes, and enrollment has climbed by 260 percent.

The sharpest increases have been among young women and students from minority groups.

The changes have been noticed by high-tech companies and the White House, which has also praised Arkansas for creating "high-quality [computer science] learning opportunities in elementary and middle school."

"Arkansas is ahead of the curve with his leadership and stepping up to make sure that this is going to be available to all the children," she said.

More than 600,000 tech jobs with good salaries went unfilled in the United States during 2015 because there weren't enough qualified people in the country to take them, U.S. officials say.

"These are really incredible, high-paying fun jobs that people can be part of," Smith said.

Students are eager to take computer science classes, she said.

It's a message that Obama is repeating.

"In the new economy, computer science isn't an optional skill -- it's a basic skill, right along with the three 'Rs.' Nine out of 10 parents want it taught to their child in school. Yet right now, only a quarter of our K through 12 schools offer computer science. Twenty-two states don't even allow it to count toward a diploma," Obama said during his Jan. 30 radio address.

"This is an idea whose time has come," said Partovi, whose organization advocates computer programming opportunities.

"Computer science is someplace where America is leading the entire ... world. We invented the Internet, we invited the personal computer, we invented the smartphone," he said.

Programs like this one will help the nation keep its high-tech advantage, he suggested.

In an interview, Richard Laine, the National Governors Association's director of education, said it would be good to "share the lessons from Arkansas" with other governors. "Amongst the states, there's probably a handful of leading states and Arkansas is clearly one of them and there's no better advocate than the governor," he said.

Hutchinson said the partnership would be "showcasing what we're doing in Arkansas."

The governors were scheduled to attend a black tie dinner at the White House on Sunday evening and are scheduled to meet with the president for 90 minutes this morning.

Hutchinson said he hoped he'd get the chance to speak with Obama about the computer education initiative.

Asked about Obama's proposal to spend $4.1 billion on computer science education, the governor declined to endorse the price tag, saying, "I don't know what is needed nationally."

"I'm just delighted we're drawing attention to it," he said.