State officials say no to I-30 as boulevard 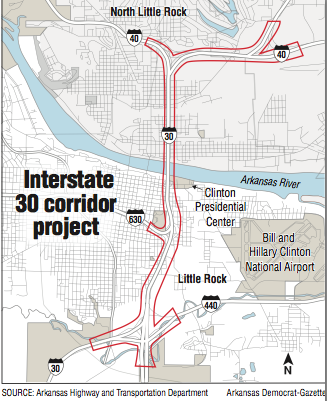 Map showing the location of the Interstate 30 corridor project.

Transforming the Interstate 30 corridor through downtown Little Rock and North Little Rock into a tree-lined boulevard has "aesthetic benefits" but would worsen "safety and mobility" within the corridor, the Arkansas Highway and Transportation Department said.

The department's first in-depth comments about the merits of a proposal by Little Rock architect Tom Fennell came in an online page called "Know the Facts: I-30" that answers a series of frequently asked questions about the project to reduce congestion and improve safety in the 6.7-mile corridor, including replacing the I-30 bridge over the Arkansas River.

The page provides a more detailed cost for the project -- $630.7 million -- and disputes that widening the corridor to 10 lanes, as the department is considering, would attract more traffic and eventually require all connecting freeways to be widened at a cost of $4 billion.

The answers to those and other questions are part of "a continuing effort to educate the public on a myriad of facts surrounding the proposed 30 Crossing project," the agency said in a news release. "A number of incorrect assumptions within the public domain propagated by blogs, neighborhood groups and stakeholders has prompted development of the FAQ."

Fennell's proposal includes ideas that opponents of the department's proposal have discussed. The department is evaluating 10-lane and eight-lane alternatives for the six-lane corridor between Interstate 530 on the south and Interstate 40 to the north.

Another meeting to invite the public to comment on the alternatives that was scheduled for Tuesday has been delayed, according to the page, to give project engineers time to evaluate a request from Little Rock city officials and stakeholders to shift downtown access farther south from the existing Cantrell Road interchange to the "downtown grid" between East Fourth and East Ninth streets. Once the evaluation is completed, a new date for the meeting will be set, the department said.

Fennell wants to see the corridor redeveloped as an "at-grade" boulevard with stop lights and styles it as an effort to slow traffic down and make it more friendly for pedestrians and cyclists. The proposal would restructure the I-30/Interstate-630 interchange, rebrand Interstate 440 as the new I-30, and add a new Arkansas River crossing on the west side of downtown.

The department frames the question this way: "Would converting I-30 to a boulevard improve traffic flow downtown and be more pedestrian and bicycle friendly?"

In a word, the answer is "no," according to the department.

Using vehicle miles traveled data from Metroplan, the department said in its response that if I-30 were converted to a boulevard, the corridor "couldn't host even half the capacity per lane currently needed. A boulevard would create even worse delays than are currently experienced in the corridor."

The department's response said spending public money requires an engineering analysis supporting "capacity decisions" to have a "high likelihood of the final product being successful.

"To date, no traffic analysis has shown how a boulevard could function with both existing and future traffic estimates, including what routes the current 115,000 -- 125,000 vehicles traveling through the I-30 corridor daily would take in order to get to their downtown destinations."

The department also asserted that the boulevard proposal would offer less safety and less mobility for pedestrians, cyclists and transit.

"To attempt to protect pedestrians and bicyclists from this at-grade conflict across a very wide 6-lane boulevard, lengthy pedestrian phases would have to be added to the traffic lights which would result in greater congestion not only in the corridor but also in the downtown grid," according to the agency.

"Pedestrians will also be less likely to cross the corridor because of the risk of crossing at-grade and the wait time associated with the traffic signal timing. Adding dedicated transit lanes will also complicate the signal phasing and cause further delay on the corridor for both vehicles and pedestrians."

Fennell has said his proposal anticipates cultural trends that show younger people driving less and, would result in overbuilding capacity if the department proceeds to widen the corridor to 10 lanes.

But the department, citing Federal Highway Administration data, said that nationally vehicle miles traveled is at an all-time high. In Arkansas, vehicle miles traveled was 2.9 percent higher in November 2015 than it was at the same time a year earlier. The agency also cites Metroplan data showing that vehicle miles traveled in the region is expected to rise 30 percent between 2010 and 2040 "even if I-30 is not improved," thanks in part to the population growing by 220,000 people by 2040.

Ultimately, the boulevard is unworkable, the department said.

"Travel patterns on this corridor have been established over time as a result of how Little Rock and North Little Rock have developed," according to the agency. "Dramatic changes in these traffic patterns cannot be made in a short amount of time unless other corridors are able to handle the excess volume of traffic without having significant impacts on businesses, housing patterns, and the general economic vitality of the region.

"I-440 isn't an option for drivers coming from all directions to access locations downtown. If they do use it as an alternate route, it can add significant time and distance to their commute to work or travel to the airport."

Fennell said he was heartened that the department has responded to his proposal.

"I'm thrilled they are answering their questions publicly," he said.

But he said he was disappointed that they are not looking beyond the "next five years." Fennell also expressed disappointment in the highway department's criticism of the boulevard proposal regarding pedestrian, bicycling and transit mobility, noting that European cities, as well as Vancouver, British Columbia, among other places, safely integrate them into traffic on wide boulevards.

"Let's all have the best possible answers," he said. The ultimate solution involves "everybody, not just the cars and trucks."

The department page also addresses assertions by Metroplan that widening I-30 will require all connecting freeways to be widened at an estimated cost of $4 billion. Metroplan is the long-range transportation planning agency for central Arkansas.

The estimate was based on assumptions that the department said is inconsistent with its standard planning processes. "Metroplan developed this estimate on the assumption that if the department's planning process results in a recommendation to widen I-30 then the same planning result applies to every interstate in the region, resulting in the their widening to 8 to 10 lanes," the agency said.

The planning looks at many factors, such as safety, congestion, cost and environmental impacts, the department said. Further, each corridor has different constraints and challenges that can result in recommendations other than widening.

Unique to the I-30 corridor, the department said, was the existing department right of way that made widening a reasonable option. The agency property provided "ample room for widening without requiring expensive and environmentally challenging purchases of additional property," the department said.

Additionally, two areas outside the corridor being studied for future improvements -- I-30 between I-530 and West 65th Street and I-630 from I-30 west past Louisiana Street -- "were already planned or in progress due to existing deficiencies in the corridors," the department said.

Jim McKenzie, the executive director of Metroplan, said the department still has yet to look at the effects the project will have beyond addressing congestion, including how an improved corridor will attract more traffic, require more asphalt for parking and thus create more impervious land that will have an effect on the environment.

"If they had presented us with the questions, the answers would've been different," McKenzie said.

The department called the online page a "living document" and said "more answers will be added as questions are identified." The document and other information about the project can be found online at 30crossing.com.

Print Headline: State officials say no to I-30 as boulevard