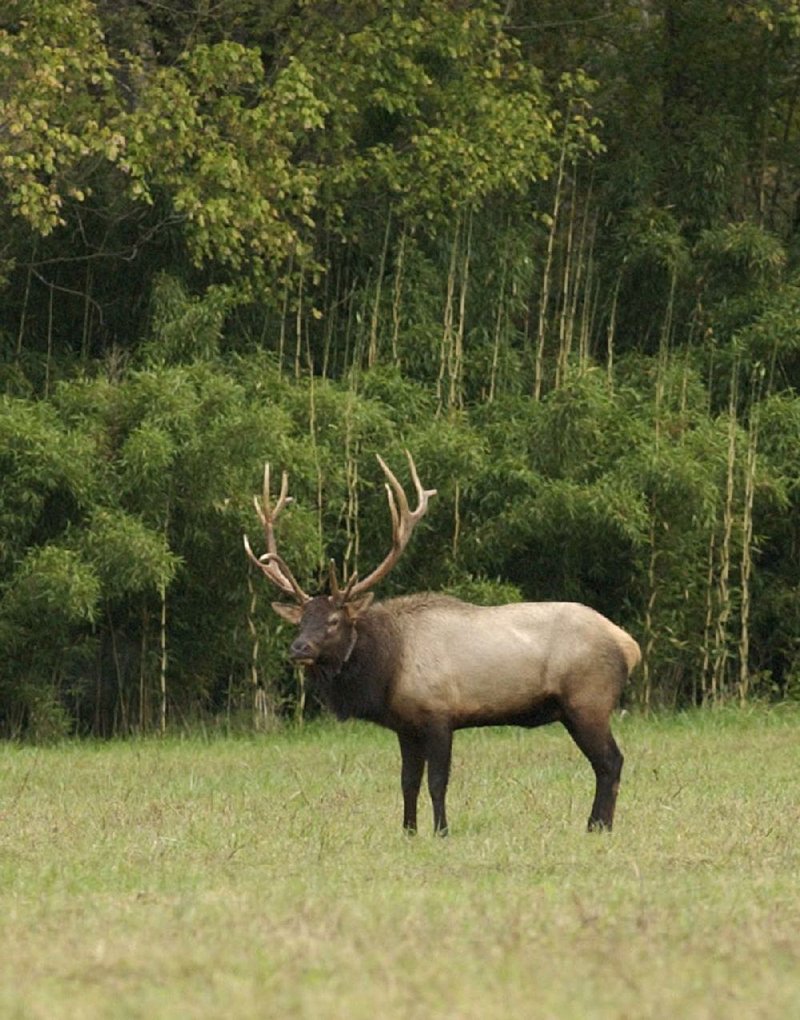 The Arkansas Game and Fish Commission confirmed Tuesday that a cow elk killed by a hunter in October in Newton County tested positive for chronic wasting disease, and that on March 7 the agency will begin killing deer and elk in a five-mile radius of where the elk was killed for further sampling. 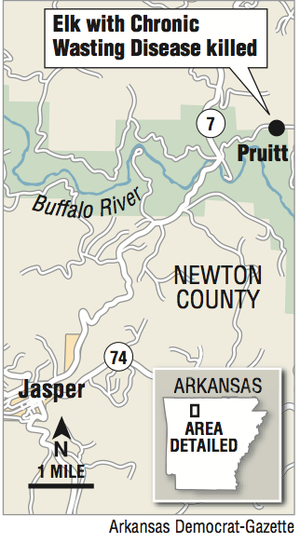 Photo by Arkansas Democrat-Gazette
A map showing the location of Pruitt.

Chronic wasting disease is a transmissible syndrome caused by mutant proteins, called prions. Similar to mad cow disease, it destroys the central nervous system, but CWD only affects cervids like elk, whitetailed deer, mule deer and moose. CWD cannot be treated, and the prions can be passed through direct contact, saliva, feces and urine. They endure in the environment indefinitely, but there has been no case of humans contracting the disease.

Arkansas is the 24th state in which a cervid tested positive for CWD. It also has been reported in two Canadian provinces. CWD has been found in captive and wild cervids in Missouri and in captive cervids in Oklahoma and Texas.

The AGFC prohibits transporting live and dead cervids from CWD-positive areas, but the commission said it was inevitable that the disease would appear in Arkansas eventually.

A hunter killed the elk legally Oct. 6 in the Buffalo National River corridor near Pruitt, north of Jasper. Brad Carner, chief of the AGFC's wildlife management division, said the elk was estimated to be about 2 1/2 years old.

Since 1997, the AGFC has sent tissue samples of 204 hunter-killed elk and 7,186 deer for CWD testing. The 2015 sample included 12 elk. The Wisconsin Veterinary Diagnostic Laboratory tested this particular elk. The U.S. Department of Agriculture lab in Ames, Iowa, verified that it was CWD positive.

Both labs used an immuno-histo chemistry method to test the sample. Steven Beaupre, head of the University of Arkansas biology department and a non-voting member of the commission, said that test is precise.

"If they used an immuno-histo test, then they have a pretty damned good diagnosis," Beaupre said. "This is bad news. I just can't tell you how bad news this is."

The AGFC will also test to see if the elk is genetically linked to the wild herd in the Buffalo River corridor. Carner said it's possible that the elk was a captive elk that escaped from an enclosure, but that it's unlikely because there are no captive elk facilities nearby.

Carner also said that a wild elk might have come into contact with a CWD-infected carcass killed in another state and dumped illegally in Arkansas.

"It just doesn't make sense that this one popped up out of the blue like it did," Carner said.

The commission held an emergency meeting Tuesday to approve a chronic wasting disease response plan, which includes identifying a CWD Core Zone that covers a 5-mile radius (50.240 acres) from where the infected elk was found. AGFC personnel will kill about 40 elk and 250-300 deer from that area for CWD sampling. The commission also authorized spending $500,000 to conduct the operation.

Cory Gray, the AGFC's deer project leader, said the best outcome is not to find any more CWD-infected cervids, but that is not likely. He said he hopes that it's no more than 1-2 percent of the total deer population.

Carner estimated that hunters have already killed 20-30 percent of the deer in that area during the combined 2015-2016 deer seasons. The sampling effort will likely kill all deer and elk in the CWD core zone, which is located in deer management Zone 2.

"If this is CWD as we understand it, there's got to be a reservoir [of infected animals] out there," Beaupre said.

Beaupre also said that only a small percentage of the 7,186 deer that the AGFC has sampled since 1997 came from the area where the CWD-positive elk was killed. Therefore, he said, it's not surprising that CWD hasn't been detected until now.

"We could have a small wildfire in that area right now and not have enough samples to pick it up," Beaupre said. "This is our one shot to do something about it."

The AGFC established the Buffalo River elk herd from 1981-1985 when it imported 112 elk from Colorado and Nebraska. There is virtually no chance that any of the original elk had CWD, Carner said. The AGFC estimates the elk herd at about 700 animals.

"Looking at how this disease has spread and increased in prevalence, our prevalence rate would be so high by now that we would have detected it long, long, long ago," Carner said. "I realize that some people will make that argument (that CWD arrived with the original elk), but I'm confident that's not possible."

Depending on how many CWD-infected deer are found and how widely distributed they are in the sampling zone, Carner said his staff might identify a larger CWD containment zone that will extend well beyond the initial core zone.

"If you don't fully get it out there, suspicion is 10 times worse than the public knowing everything," Mahony said. "Tell them what you know and get the public's confidence, and you'll be way ahead of the game."

Carner said he intends to set up a public meeting Monday in Jasper to discuss the deer and elk culling operations in the area. He will also set up similar meetings in Harrison and Marshall.

"We envision having recurring meetings in that community to keep them posted of what we've gotten so far, and how much we need," Carner said.

Serving his last year on the commission, Mahony was philosophical about the arrival of CWD in Arkansas.

"It's been apparent for some time that this disease in all probability is going to be nationwide. We're the 24th state," Mahony said. "You do what you have to do. The good thing is that our staff prepared for it so well."