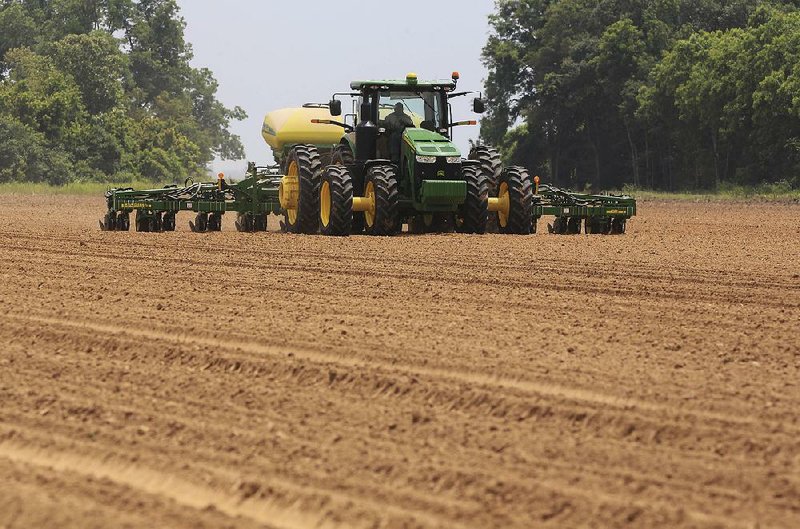 For farmers who grow some of the biggest U.S. crops, choosing what to plant this year has become a bet on which one will lose less money.

A three-year plunge in prices has sent farm income to the lowest level in more than a decade and left parts of the Midwest agricultural economy in recession. While growers probably would lose $70 on every acre of corn or soybeans they sow -- the most since 1999 -- those crops offer the best chance at profit if yields are better than average, according to AgResource Co. So, even with record global surpluses, U.S. farmers are preparing to plant more corn and soybeans in 2016 and devote fewer acres to wheat, a Bloomberg survey showed.

"Nothing looks very good," Terry Vinduska, 65, said by telephone from his 3,500-acre farm in central Kansas, the biggest wheat-growing state. Vinduska, who runs the farm with his son-in-law and the younger man's father, plans to expand corn planting by 10 percent and soybeans by 5 percent on land he normally uses for wheat.

While prices for all three crops are down more than 50 percent from peaks in 2012, improvements in seed technology to fight drought, bugs and disease have allowed farmers to collect at least 23 percent more corn and soybeans per acre since 2000, while wheat yields rose just 3.8 percent. Increased output of wheat from places like Russia and Ukraine is sending U.S. exports to a 44-year low, further eroding the appeal for American growers who already are mired in the longest income slump since the 1980s.

To maximize revenue, farmers probably will expand corn planting by 1.9 percent to 89.689 million acres, the first increase since sowing a record 97.291 million in 2012, according to a Bloomberg survey of 32 trading firms and analysts. Soybean sowing may rise 0.8 percent to an all-time high of 83.345 million acres, the survey showed. Most will be planted in April and May and harvested in September and October.

The U.S. Department of Agriculture on Thursday forecast an even bigger increase this year for corn, up 2.3 percent to 90 million acres, but it predicts farmers will cut planting for soybeans by 0.2 percent, to 82.5 million acres. The USDA today will issue its first production forecasts for 2016. On March 31, the agency will release the results of a national planting survey of more than 84,000 growers that begins next week.

"Maximizing yield is the new game in town, and that means corn and soybeans offer more upside than wheat," said Dan Basse, the president of Chicago-based AgResource, an industry adviser. "It's much like OPEC producers where they have to produce more to generate income when prices are low. U.S. farmers are not going to leave land fallow."

About 70 percent of U.S. wheat is the winter variety planted in September and harvested in June. The rest is spring wheat sown in April and May. Total wheat planting will fall 6.7 percent to 51 million acres, the USDA said Thursday. In Nebraska, winter seedings were the lowest on record, and they also fell in the top producing states of Kansas and Texas.

At current prices and average yields, wheat would generate a loss of about $25 an acre, Basse estimates. The loss would be bigger for corn and soybeans, which are more expensive to plant, but if yields are anywhere near the records of the past few years, farmers would stand a good chance of breaking even or making money, he said.

In Metropolis, Ill., Rollo Burnett cut his winter-wheat crop in half to 500 acres and said he will increase soybean planting by 24 percent to 2,600 acres this year. He'll keep corn at 2,400 acres, partly to stick with his crop-rotation plan. Burnett, 69, said he still considered adding more corn after fertilizer costs fell to the lowest level since 2010 and seed prices declined about 10 percent, but the grain is more expensive to grow and harvest, so he elected to reduce his financial risk by adding more soybeans.

Farmers have been hurt by crop and livestock prices that have tumbled along with most commodities, after a decade of rising demand and prices led to a surge in output and surpluses. Net farm income in the U.S. will slump to $54.8 billion this year, down from a record $123.3 billion in 2013, government data show. Government subsidies will ease the burden for growers, who will get a 31 percent increase in direct payments to $13.9 billion in 2016. Still, 37 percent of rural Midwest bankers in a Creighton University survey this month said their local economies were in recession.

Ammonia prices on average fell 18 percent in the fourth quarter, while urea ammonium nitrate dropped 13 percent. These are the two biggest corn fertilizers. It takes about 1.2 pounds of nitrogen to produce a bushel of corn.

For Vinduska, who had grown mostly wheat in Marion, Kan., about 170 miles southwest of Kansas City, the decision to sow more corn and soybeans was influenced by a 15 percent drop in fertilizer costs and similar discounts for seed. Other growers in the area are doing the same, he said.

"A few growers dramatically cut wheat acres, and most are reducing wheat to plant more corn and soybeans," said Vinduska, who also has been a seed-corn dealer for DuPont & Co.'s Pioneer unit for 30 years.