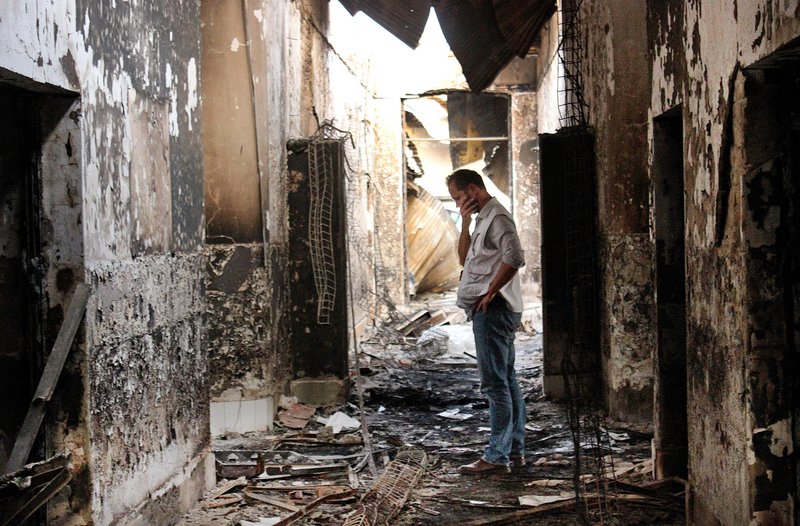 An employee of Doctors Without Borders walks inside the charred remains of the organization's hospital after it was hit by a U.S. airstrike in Kunduz, Afghanistan.

KABUL, Afghanistan -- Doctors Without Borders says the "sorry money" that the U.S. military is paying to wounded survivors and relatives of the 42 people killed when a U.S. AC-130 gunship attacked a hospital run by the charity doesn't compensate for the loss of life.

The payments amount to $6,000 for each person killed, with the wounded receiving $3,000 each, according to representatives of the victims of the Oct. 3 bombing. All 460 staff members who were employed at the hospital at the time of the attack are expected to receive some amount of cash compensation.

U.S. forces in Afghanistan have "expressed their condolences and offered a condolence payment to more than 140 families and individuals," said the spokesman for the U.S. military in Afghanistan, U.S. Army Col. Mike Lawhorn. He refused to give further details.

Guilhem Molinie, the Doctors Without Borders representative in Afghanistan, said his group has discussed the "sorry money" with the U.S. military, calling the amount of the payments "ridiculous." He said many of the families had lost their sole breadwinner and that the funds would run out soon.

"These amounts are absolutely not compensation for loss of life," he said.

The trauma hospital was attacked during a firefight as U.S. advisers were helping Afghan forces retake Kunduz from the Taliban, who had captured the northern city on Sept. 28 and held it for three days.

Of the dead, 14 were hospital staff members, 24 were patients and four were caretakers, mostly relatives of patients. Another 27 staff members were wounded. The hospital was destroyed and the charity ceased operations in Kunduz.

President Barack Obama apologized for the attack, which was one of the deadliest assaults on civilians in the 15-year war. The commander of U.S. and NATO troops in Afghanistan, Gen. John Campbell, called it a mistake. Internal military investigations have not been made public.

A joint U.S.-NATO assessment says the AC-130 gunship fired 211 shells at the compound for a half-hour before commanders realized the mistake and halted fire. Contrary to initial claims by Afghan officials, the report says there was no evidence the hospital had been overrun by Taliban gunmen or that there were hostilities there.

A parallel investigation by the U.S. military produced a 3,000-page report that officials say will be made public after it has been redacted. They have not given a firm date for its release.

Molinie said the information in the reports has not been shared with the charity. "We are still totally in the dark on what happened on that night in Kunduz," he said.

As condolence payments, the amounts are seen as adequate to cover basic costs such as funerals, rather than as compensation, or blood money, for the deaths and injuries caused by the attack.

The United States has paid up to $50,000 per death in some cases, such as the multiple killing of Afghan civilians by a U.S. soldier in 2013. The amount paid is assessed on a case-by-case basis. The Afghan government of former President Hamid Karzai paid compensation of about $1,500 to the family of each person killed in the conflict.

The office of President Ashraf Ghani did not respond to a request for information. But Abdul Wase Basil, spokesman for the governor of Kunduz province, said the provincial government had paid compensation to 400 families that were affected by the violence of the siege of Kunduz city, which lasted about three weeks after the Sept. 28 Taliban onslaught. He said the wounded had been paid $290 each, and bereaved families $730.

Zabiullah Khan, 25, lost both his hands and an eye in the bombing of the hospital, where he worked as a nurse. He was the sole supporter of his family of nine.

"I want to know why the American government bombed us, what did we do wrong," he said. "Now we have no money coming in at all. I want the Americans to provide advanced treatment for me abroad."

Anayatullah Hamdard lost his father, who was a doctor. He now represents the families in their dealings with the U.S. military and is hoping they can get legal advice on how to pursue more compensation. "We need someone with knowledge of war crimes to help us," said Hamdard, an agriculture professor at Kunduz University.

Their legal options are limited by the agreements that govern the U.S. military's presence in the country, which give the U.S. the exclusive right to prosecute its service members.

Molinie fears the lack of accountability for U.S. or Afghan forces after the Kunduz attack has encouraged a culture of impunity worldwide. Like other charities operating in war zones, Doctors Without Borders follows a policy of strict neutrality, treating anyone without asking their affiliation. But in recent weeks its facilities have been bombed in both Syria and Yemen.

The U.S. military has offered to rebuild the hospital in Kunduz. But Molinie said the priority was "making sure that the incredible chain of errors, mistakes, technical failures that were said to have happened in Kunduz will not happen again and could not happen again.

"Securing the basic assurance that we can run a hospital on the front line is much more important for us than rebuilding the hospital."

Information for this article was contributed by Humayoon Babur of The Associated Press.