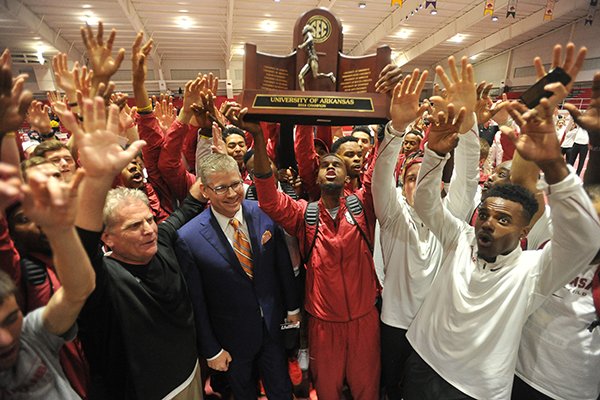 Arkansas finished second to Florida at last year's NCAA Indoor meet and was second to Texas A&M and Florida at the previous two SEC Outdoor meets.

"It's nice to get our get our trophy back," Razorbacks Coach Chris Bucknam said. "It feels right.

"I'm just really proud of our guys. They've done an incredible amount of work to get this championship. It means everything to us. This is a meet we circle every year."

It was the 100th conference championship for Arkansas in cross country and indoor and outdoor track and field, including 84 in the Southwest Conference and SEC under John McDonnell, who coached the Razorbacks from 1972-2008. Bucknam has led Arkansas to 16 SEC titles since succeeding McDonnell.

"It's in our DNA to win this championship," Bucknam said. "We've been left a great legacy by all of our alums. We embrace it and we lived up to that standard today and what Arkansas track and field is all about."

Arkansas had 24 of its 27 athletes who participated in the meet score in 15 of 17 events.

"We competed across the board," Bucknam said. "We talked about the fact we needed all hands on deck."

Arkansas senior Gabe Gonzelez, who took fourth in the 5,000 meters Saturday and sixth in the 3,000 Friday night, grew up in Springdale following the Razorbacks.

"At Arkansas, it's our mission to win championships," Gonzalez said. "If we get second or third, then it's a disappointment. We're here to win trophies, plain and simple. I'm just proud of the whole team. The competition we face in the SEC is basically the national meet, so winning this title means a lot."

Arkansas junior Clive Pullen had a personal best 54 feet, 3 3/4 inches to win the triple jump and clinch the team title. His victory gave the Razorbacks 100 points with two events remaining.

"I'm just happy I contributed my 10 points," Pullen said. "I knew I was in the proper physical shape, and I just had to be in the proper mental shape and execute everything we'd been doing in practice. I was focusing on the process. Just blocking everybody and everything else out and making it happen."

Other highlights for the Razorbacks on Saturday included:

Arkansas senior Marqueze Washington was fourth in the 400, but what happened in the race and afterwards between he and LSU junior Michael Cherry was no highlight.

The two got in a fight off the track and had to be separated. They were disqualified from competing in any other events, which would have included the 1,600 relay for both.

"That's not how we want our kids to operate," Bucknam said. "There was a lot of emotion obviously, but you've got to keep it on the track. There was a lot of incidental contact. You had the No. 1 and 2 guys in the country going at it -- big guys on a small track. Everybody wants to win, but you have to do your battling on the track and have good sportsmanship off of it."

Pullen's victory gave the Razorbacks a sweep in the jumps after Lawson won the long jump and Ken LeGassey won the high jump Friday night.

"Those three guys work their tails off, and to see it come to fruition at a big meet in front of our home crowd is tremendous," Arkansas field events coach Travis Geopfert said. "They're all talented, but they're competitors. When it's on the line, they're team players and they go out there and get it done. As a coach, that's something you can't teach those guys. They just have it."

Lawson said it took more than the individual titles to win the team championship.

"We had a lot of guys step up for the team," Lawson said. "We didn't want anyone to take this trophy away from us."