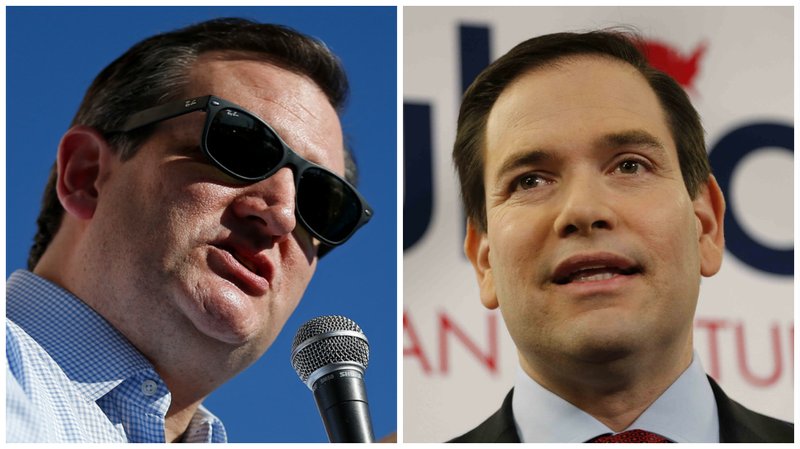 A federal judge dismissed a lawsuit brought by an Arkansas man who said Sens. Ted Cruz and Marco Rubio are ineligible to be president because they do not meet the natural-born citizen requirement outlined in the Constitution, according to a court order filed Monday.

During an afternoon hearing, David Librace sought to have the senators' names removed from Tuesday's primary ballot in the state by arguing that Rubio cannot serve as president because his parents are not U.S. citizens and that Cruz is ineligible because he was born in Canada.

In addition to attacking the merits of his argument, Miller ruled that Librace lacked standing to raise the issue in federal court because he cannot show that he has been concretely and particularly injured.

Librace argued he is injured because his "right to vote will be diluted, debased, and desecrated by the presence of Mr. Rubio and Mr. Cruz on the Arkansas ballot," but Miller said that is overly broad because Librace shares it with every other Arkansan.

Miller's ruling was in line with several other court orders that dismissed cases against then-Sen. Barack Obama and Sen. John McCain in 2008 for similar reasons.

A U.S. district judge in Little Rock questioned Monday whether he could make a decision on natural birth citizenship that would set a precedent for a series of lawsuits that have been filed against recent candidates for president.

Presidential candidates from both parties, including Sens. John McCain and Barack Obama in 2008 as well as Sens. Marco Rubio and Ted Cruz in this cycle, have had to defend themselves against claims that the circumstances of their births make them constitutionally intelligible for the office.

But whenever those claims have been filed in court, judges have declined to define a "natural-born" citizen by saying it is a political issue not meant for the courts, according to arguments made by attorneys and U.S. Judge Brian Miller in the District Court of Eastern Arkansas on Monday.

Attorneys for Cruz, Rubio, Arkansas Secretary of State Mark Martin and the Arkansas Republican Party were making just that argument Monday, saying Miller should decline to rule on the merits of a suit brought by a Helena-West Helena man seeking to have the senators removed from the ballot in Arkansas.

In addition to arguing that Miller should not make a decision on natural-birth citizenship, attorneys arguing against the suit said it would cause "irreparable harm" a day ahead of the state's partisan primary elections if Miller orders an injunction against the candidates.

The ballots for Tuesday's vote have already been printed; 170,000 people have cast ballots during the early voting period; and an additional number of absentee voters in the military and abroad have received ballots, according to testimony from Rob Hammons, the director of elections for the secretary of state's office.

During the hour-and-a-half hearing, Miller questioned if a ruling in the other direction — that Cruz and Rubio both qualify as natural-born — could end similar arguments in other courts.

"When is a court just going to say here it is?" Miller said on the question of natural birth citizenship. "If a court would just be clear, we wouldn't have to file these cases over and over."

Miller said he would issue a written order later Monday.

An Arkansas man who has sued to have Sens. Marco Rubio and Ted Cruz declared ineligible for the presidency will get a chance to argue his case in federal court in Little Rock on Monday.

U.S. District Judge Brian Miller will hear David Librace's lawsuit against the senators and Arkansas Secretary of State Mark Martin, whose office placed them on the ballot, the judge's office confirmed Monday.

The hearing was first reported Sunday by Arkansas Business.

In his suit, Librace argues that the constitutional eligibility of the senators to run for president as natural-born citizens is, at best, unclear, and "must be adjudicated as soon as possible to prevent a Constitutional travesty."

Both Cruz and Rubio are of Cuban descent. Cruz was born in Canada to a Cuban father and American mother. Rubio was born in Miami to Cuban immigrant parents.

"A possible disenfranchisement of the voters of Arkansas looms if one of these candidates were to win and be challenged by another candidate or elector eligible to vote in an open primary," Librace wrote in the suit, which was filed earlier this month in Helena-West Helena.

In his response to the suit, Martin said that Librace is actually a convicted felon from Florida whose real name is Roy Allen Cole and that Cole is ineligible to file suit on behalf of Arkansas voters. Martin also wrote that he believes there to be numerous inaccuracies in Librace's (or Cole's) argument.

The Tampa Bay Times recently reported that a similar suit was filed against Cruz and Rubio by a Florida man named Michael Voeltz.

Check back with Arkansas Online for updates from Monday's court hearing and read Tuesday's Arkansas Democrat-Gazette for full details.