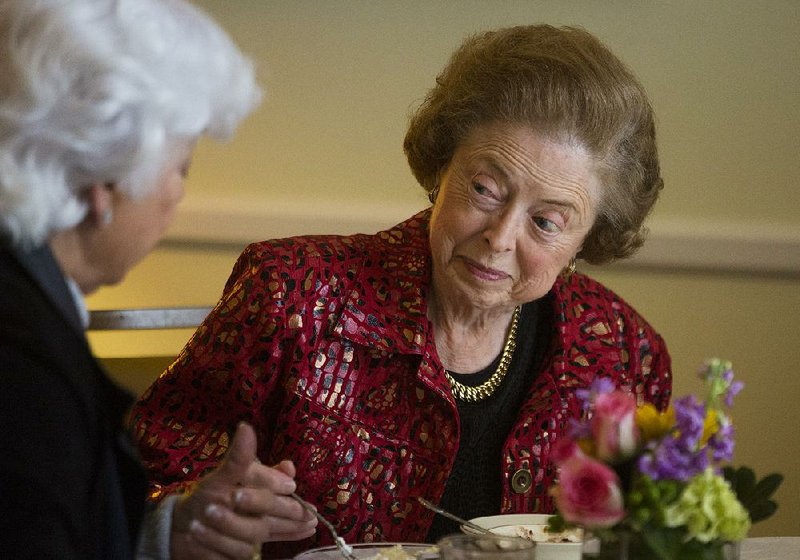 Maudie Simmons and Eva Pappas will be of legal drinking age today. 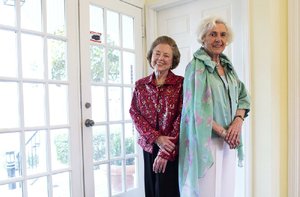 Photo by Melissa Gerrits
Eva Pappas (left) and Maudie Simmons, who were born on Feb. 29, 1932, pose for a portrait during their 21st birthday celebration Sunday at Cambridge Place condominiums in Little Rock.

Simmons and Pappas, both of Little Rock, were born Feb. 29, 1932, leap-year-day babies. With leap year occurring only once every four years, Simmons and Pappas certainly weren't going to miss the opportunity to celebrate their actual birth dates for just the 21st time in their lives.

Simmons and Pappas, who turn 84 today, celebrated Sunday with 50 or so others at a cake and ice cream party hosted by Simmons in the clubhouse at Cambridge Place condominiums.

The odds of a child being born on leap-year day are 1 in 1,461, according to The Honor Society of Leap Year Day Babies, a club for people born on Feb. 29.

Simmons said she never thought much about her unique birth date until she turned 8.

That was the year her mother threw her a party, and Simmons took a bus by herself to the former MM Cohn Co. department store downtown to buy her own present -- a beanie-type felt hat and matching purse that she put on her father's charge account.

"That was my gift to myself," she said.

When she was growing up, Simmons said, her mom made sure that every year she had a new birthday dress even if it wasn't given on her actual birth date.

"Mother told me I was special," Simmons said, laughing. "I just thought that meant I had to be real good."

In the 1980s, when Simmons taught art at the School for the Deaf, she celebrated her leap-year birthday with a school-wide party and balloon release. Each of the balloons had a card with information attached to it. Sometime later she received a call from someone who had found one of the balloons in a pond in Mississippi.

"It was fun to watch all those balloons going over the Capitol," said Simmons, who celebrates her birthday the day before her actual birth date in nonleap years. "I thought maybe some of them would hit the dome, but they just went on south."

Pappas said she always gets more cards and calls from relatives and friends during a leap year.

Pappas is a first-generation American, the daughter of Greek immigrants. Revelry was the norm during her childhood in Pine Bluff, and Pappas said all her family needed to have a party was to find an excuse for one.

Her leap-year birthdays were a more than sufficient excuse.

Pappas' father was a partner in the OK Ice Cream and Candy Co., so party supplies were plentiful.

"We just did it right," she said. "We'd have ice cream all over the place."

Simmons and Pappas first met at a party thrown by Frank Whitbeck, who owned an insurance company. The party was for all leap-year birthday people in and around Little Rock. The two helped decorate for the party and were featured in the Arkansas Democrat-Gazette in 1996, Pappas said.

"It was really special," Pappas said. "He did everything first-class."

"He went to every hotel, every country club," Simmons said of the birthday bashes thrown by Whitbeck, who died in 2002. "He'd have entertainment, dance music and so forth."

University of Arkansas at Little Rock sociology professor Terry Richard said that while leap-day children are young, a lot hinges on how their birthdays are treated by their parents.

"It's really critical that parents devise some mechanism to celebrate their birthday every year, even though the 29th isn't going to come three out of every four years," Richard said.

He said once people reach age 50 or so, they tend to avoid birthday celebrations, but that is not always the case for leap-day grown-ups. They often revel, joking about how young they are because they don't have birthdays every year.

"It is just one of those lucky things that they were born on a leap year," Richard said. "They feel like rare individuals. It really just depends on the personality of the individual."