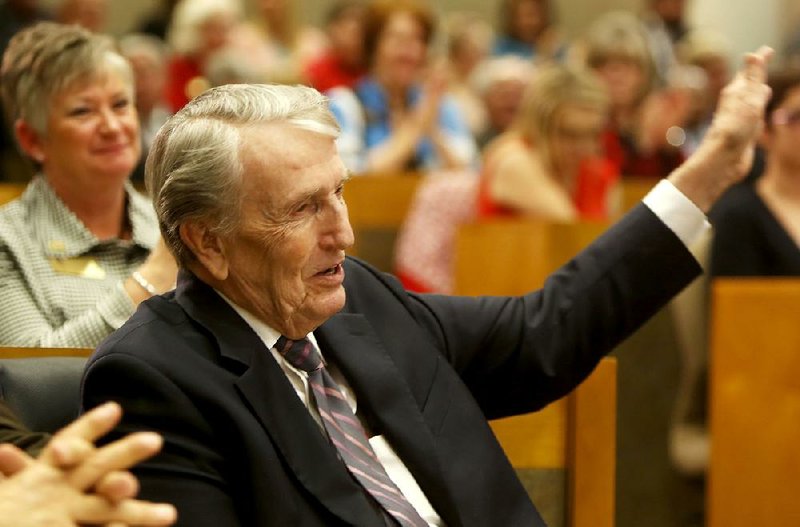 His son, Brent Bumpers, wrote in an email that his father fell and broke his hip three weeks ago, requiring surgery.

It has been a "downward spiral" since the fall, Brent Bumpers said

Dale Bumpers, a Democrat and county lawyer from Charleston in Franklin County, was Arkansas' governor from 1971-75 and U.S. senator from 1975-99.

Bumpers was a fiscally conservative, socially liberal senator known for his oratory skills and sharp wit. As governor, he reorganized state government into a cabinet system and fought to raise taxes, bringing in tens of millions of dollars in new revenue.

During his political career, Bumpers defeated some of the giants of Arkansas politics — Orval Faubus and Winthrop Rockefeller for governor in 1970 and J. William Fulbright in 1974 for the U.S. Senate seat that Fulbright had held for 30 years.

Afterward, Bumpers defeated anyone who ran against him for Senate, including Asa Hutchinson and Mike Huckabee.

Hutchinson released a statement Saturday which read, in part: “The entire state mourns the loss of an Arkansas legend. In my first statewide race, Dale took me to school on Arkansas politics. He was a master storyteller, and his stump speaking was impossible to beat. ... We will all miss Dale."

Huckabee said Saturday that "I first knew him as a political opponent and I must confess he beat me like a drum. ... Our political differences aside, he was a dedicated public servant who always reminded his audiences that 'public service is a noble calling.'"

Former President Bill Clinton also spoke about Bumpers on Saturday, calling him a "governor of profound historical importance, the most eloquent defender of our constitution in the Senate, a man who put his considerable gifts of wisdom, wit, and passion to work for the common good."

Clinton, also a former Arkansas governor, said in a statement: "For more than 40 years Hillary and I cherished his friendship. I am grateful that his advice made me a better governor and President, and that we laughed at each other’s jokes even when we’d heard them before. And I’m grateful that he welcomed Hillary to Arkansas and supported her in Washington."

It is with great sadness that we announce the passing of our father and husband, Senator Dale Bumpers. He passed away Friday night, January 1, in his home surrounded by our family. We want to thank his many friends and colleagues who have supported him and us over the years. While most people knew him as a great governor, senator and public servant, we remember him best as a loving father and husband who gave us unconditional love and support and whose life provided wonderful guidance on how to be a compassionate and productive person. Arrangements for his memorial service are being handled by Roller Funeral Homes.