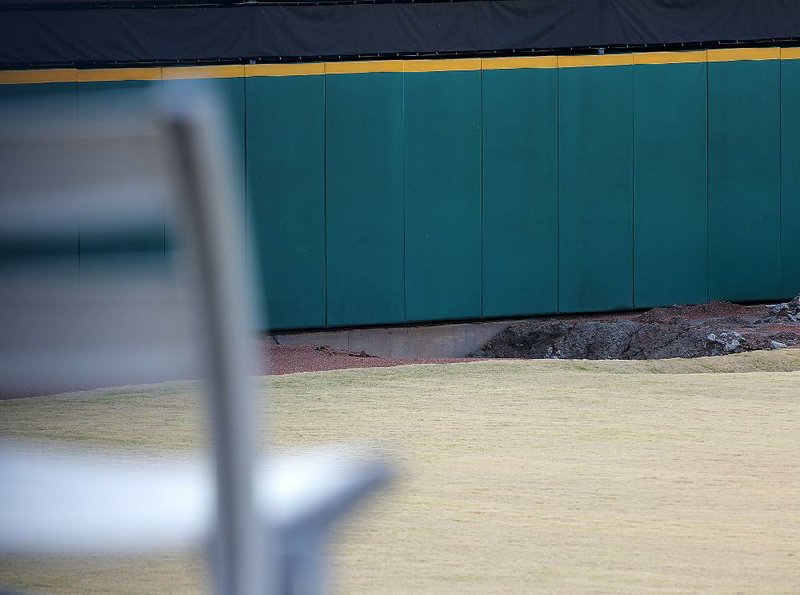 An empty seat overlooks a sinkhole along the warning track at Dickey-Stephens Park on Friday in North Little Rock.

"Warning track" would have a different meaning for Arkansas Traveler outfielders if baseball season were underway at Dickey-Stephens Park in North Little Rock.

At least three sinkholes have appeared on or near the warning track in the park's center field, and smaller ones have shown up elsewhere on the field, city officials said last week. The $40.4 million, city-owned baseball stadium at 400 W. Broadway has been the home field for the Class AA minor league Travelers since opening in 2007.

"[The holes] follow the warning track in that general area of the outfield," Chief City Engineer Chris Wilbourn said. "I'd say there are multiple sinkholes. Some are small, some medium."

City officials and staff members from the Arkansas Travelers Baseball Club Inc.are to meet with an engineering firm next week to review the firm's just-completed report about the problems, Travelers General Manager Paul Allen said Thursday.

"We're to look at the report, and then come up with a plan to further cap it off," Allen said. "It's not like a typical sinkhole you think about that opens up and you see that on TV. These kind of shift an inch at a time. But if you let it keep going, it will."

Wilbourn said North Little Rock has a "repair rehabilitation" design plan completed in-house, but the city will negotiate costs with an outside contractor for the repairs at the ballpark, which is near the Arkansas River bank downtown. With the river having risen to historic levels in the past few days, repair work cannot be done until water levels recede, officials added.

Allen said the baseball season shouldn't be affected by the problems. Travelers players won't report to North Little Rock from spring training until the week of the team's home season opener April 7, he said.

"It's not like somebody can be running and fall into it," Allen said.

Sinkholes aren't a new problem at Dickey-Stephens, which was built below street level on the north side of the city's Riverfront Drive and is adjacent to the Broadway Bridge, which spans the river. A sinkhole about 5 yards long in center field was repaired in 2008, a year after the ballpark opened. Another sizable hole and smaller ones were repaired during the past baseball season after spring flooding along the river.

"The thing is that in May and June, when the water was up for so long, the water table underneath us probably came up a little more," Allen said.

North Little Rock Mayor Joe Smith first expressed concern about the new sinkholes last week when he told City Council members to expect authorization to be requested from the council for repairs to the ball field by early in the new year.

The biggest worry, Smith said, is the proximity of sinkholes to the outfield walls.

"The ones that are threatening the outfield walls are the ones we're concerned about," Smith said. "That [repair] will be Phase One. Phase Two, Three or Four will come closer into the infield. But we don't want the outfield walls to fail."

After the 2008 sinkhole appeared, Smith said, building contractors, engineers, architects and others involved with the ballpark's construction placed a combined $160,000 into an account to be used for any future problems with the field.

"They all agreed to share some responsibility. That's where we ended up with the $160,000 for any future repairs," Smith said. "It would take a group of scientists to figure out what exactly happened."

"We've been holding that money for six or seven years and been patching [the field] as we go," he said. "Now these issues are getting close enough to the walls in the outfield that we can't patch it anymore. It's got to be fixed."

In 2008, ballpark superintendent Greg Johnston speculated in an Arkansas Democrat-Gazette interview that there was a hole in the fabric that helps separate sediment from water during the field's drainage process. The fabric is to stop sand and dirt under the field from going down through the drainage system when water levels recede.

The drainage system needs to be replaced "with new technology and use that $160,000 to pay for it," Smith said. "Hopefully, it will be enough."

Because much of the work to replace pipes will be underground, the high level of groundwater right now exacerbates the problem and will delay repairs, Smith said.

"When we had the flood in April or May, it created some problems, and we were able to backfill and get through the season," Smith said. "We have a plan, and we know what to do. We've just got to find the time to get in there and do it."

North Little Rock voters approved a 1 percent city sales tax in September 2007 that expired after two years, and about $28 million of that tax revenue was used to build the ballpark. The park also received private contributions, and the property for the ballpark was donated.

The Travelers Baseball Club pays a $230,000 rental fee to the city each April to cover a remaining debt from a $6 million overrun on the construction cost.

The payment amount, established through a restructured 10-year loan agreed to by the city and the Travelers in 2014, is transferred to the North Little Rock Public Building Authority. The independent board is responsible for making the subsequent loan payment on the debt.

Print Headline: NLR ballpark in a slump, of sorts