Volatility of stocks scares off Chinese 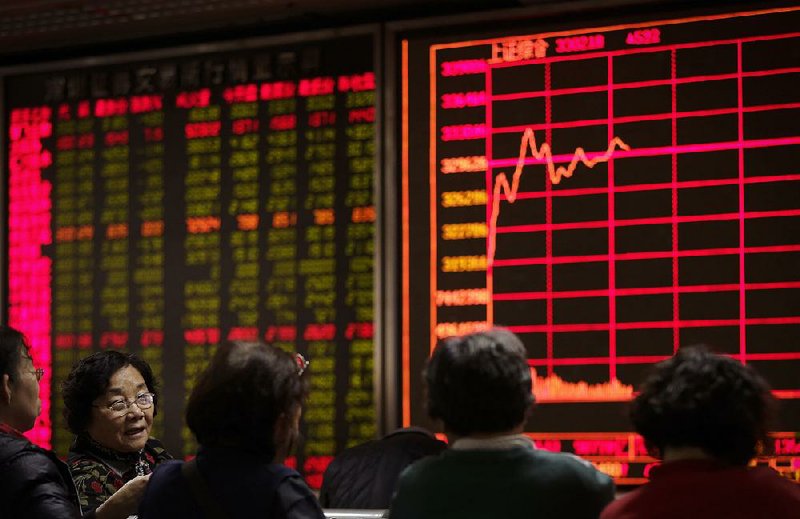 Investors chat Tuesday at a brokerage house in Beijing where they were watching stock prices. Market instability has driven away many of China’s small investors.

BEIJING -- Yang Lihua was one of millions of small investors the Chinese government encouraged to join a stock-buying frenzy last year. But the Shanghai newspaper editor sold after prices collapsed in June and she vowed never to return.

In November, Yang was coaxed back in after a multibillion-dollar government intervention stabilized prices. Then on Monday, the benchmark Shanghai Composite Index began the new year by plunging nearly 7 percent.

Battered by market gyrations, Chinese small investors are swearing off stocks. That is setting back the ruling Communist Party's hopes of encouraging widespread stock ownership to help transform its financial markets into tools to propel economic reform.

Despite a rebound in prices from their August lows, no significant new money from small investors has flowed into stocks, according to Guo Yanhong, a market strategist for Founder Securities.

"They have either no more money to invest or they just don't want to invest anymore," said Guo.

Last year's Chinese stock boom and disastrous bust have left a legacy of public distrust of financial markets along with a bill the ruling party has yet to disclose for its rescue.

The Shanghai index ended 2015 up 9.5 percent for the year, compared with a 0.7 percent loss for Wall Street's Standard & Poor's 500 index. But many novices who bought just before the peak are left with shares worth less than they cost.

"I feel sort of depressed to talk about this, because I'm afraid I am losing almost all my recent salary to the stock market," said Kai, 26.

Financial analysts expect more selling after Friday, when a six-month-old ban on sales by shareholders who own more than 5 percent of a company is scheduled to expire.

Millions of new investors were opening trading accounts a year ago as China encouraged the public to buy stocks.

Chinese leaders wanted to use the markets to raise money to pay down debt at state companies. As part of a sweeping effort to make the state-dominated economy more productive, they hope transforming coddled state industries into profit-oriented companies with outside shareholders might make them more competitive and efficient.

Driven by cheerleading in the state press, which told investors the market was in a "golden age," the Shanghai index more than doubled between November and its June 12 peak. The bubble burst after a change in bank regulations prompted concern Beijing was curbing credit to finance trading. By late June, the benchmark had lost 30 percent.

Yang, the newspaper editor, watched her money evaporate. On June 25, her stocks fell by the daily limit of 10 percent. The next day they fell again by the same margin.

"I sold out all my stocks on the 30th, and decided I would never invest in the stock market again," she said.

Prices stabilized, then fell again in August, putting the index down 43 percent from its peak. Goldman Sachs said in an August report a group of state entities charged with propping up prices had spent an estimated $135 billion-$140 billion to buy shares in June and July.

That left state companies with vast piles of shares, setting back official plans to reduce the government's role in the market.

Markets stabilized and even showed gains in the autumn as Beijing started winding down its emergency measures.

"In November, the market seemed stable, and looked more optimistic, so I started investing again," said Yang, who is in her 30s.

Still, analysts warned prices would lurch up and down until the market found a realistic level.

By late December, the Shanghai index had risen 25 percent from its August trough before hitting a peak Dec. 22 and tumbling again. Monday's decline put the index down 10 percent.

Trading was initially suspended for 15 minutes Monday by a newly imposed "circuit breaker" after another index, the CSI 300, fell 5 percent. Once trading resumed, a flurry of selling sent the index down another 2 percent in seven minutes, triggering a trading halt for the day.

In an apparent effort to reassure investors, the central bank said late Monday the size of its regular weekly injection of money into credit markets would be $21 billion -- or 13 times the size of last week's supply.

Despite that, the Shanghai index fell another 3 percent on Tuesday before recovering to end the day down 0.3 percent.

The market is unlikely to stabilize until at least the second quarter of this year, said Guo, of Founder Securities. He said persuading small investors to return will take longer.

"It will take some time to heal their wounds," said Guo. "Based on past experience, it usually takes a couple of years."

Information for this article was contributed by Fu Ting, Dong Tongjian and Yu Bing of The Associated Press.