Hannahs pitches in despite misses 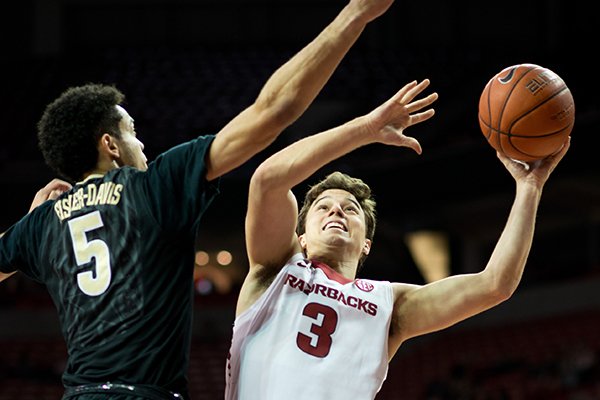 Jones matched his career-high with 15 rebounds, but just one of those came on the offensive end. Kornet had eight rebounds but just one on offense.

Two of Kingsley's eight rebounds were on offense.

Hannahs offensive rebound helped start an Arkansas rally after the Commodores had taken an 80-77 lead in overtime.

Hannahs rebounded a missed three-pointer by Jabril Durham, was fouled, and hit 1 of 2 free throws to make it 80-78 and initiate a 13-5 run for the Razorbacks over the final 3:23.

Durham stole the ball from Kornet, and Kingsley got a dunk to tie it 80-80.

Anthlon Bell stole the ball from Jones, and Hannahs hit a running jumper to put the Razorbacks ahead for good at 82-80 with 2:27 left.

After Vanderbilt turned it over again when Wade Baldwin lost the ball, Hannahs drew Jones' fifth foul at the 1:05 mark and hit two free throws to push Arkansas' lead to 84-80.

With Jones fouled out after scoring 24 points, the Razorbacks (7-7, 1-1 SEC) hung on to win as Durham got another steal and hit 4 of 4 free throws in the final 20 seconds.

Hannahs shot 2 of 11 from the field, but he scored 5 points in overtime to finish with 13.

"Players make plays down the stretch, and that's what he did," said Bell, who led the Razorbacks with 26 points. "Dusty is a shooter, and he's got to keep shooting, whether it's gong to the rack or coming off screens.

"He just stayed with it and kept his confidence up. I kept telling him, 'Keep shooting the ball,' and he came through for us."

Hannahs had four offensive rebounds total in the Razorbacks' 13 games prior to Tuesday night.

"He got [three] offensive rebounds against us, which is really kind of disappointing on our part," Vanderbilt Coach Kevin Stallings said. "He's a very good player. He should not be getting offensive rebounds, though."

Arkansas Coach Mike Anderson said Hannahs' rebounding was a plus when the Razorbacks turned to a smaller lineup.

"Dusty, at times, was like a small forward out there," Anderson said. "So I guess he used his bulk."

Hannahs used his driving ability to get to the free-throw line, where he was 9 of 10.

Hannahs has "deep range," Stallings said, but he was 0 of 3 on three-point attempts against Vanderbilt.

Anderson said despite Hannahs' shooting struggles, his presence opened the inside for Kingsley, who had 25 points.

Bell was the only Razorback to hit a three-pointer, going 6 of 10. His last three-pointer -- with an assist from Durham -- gave Arkansas a 77-75 lead with 2.1 seconds left in regulation.

Vanderbilt was out of timeouts, but Anderson called one to set up Arkansas' defense.

Anderson said the players weren't supposed to switch, but after a screen on Kingsley, 6-0 Razorbacks guard Anton Beard ended up on Jones, who caught a long inbounds pass from Kornet at the three-point line.

Jones went to the basket as Beard tried to steal the pass and dunked over a block attempt by Kingsley at the regulation buzzer to send the game to overtime at 77-77.

"First of all, there shouldn't have been any switching," Anderson said. "We had matched up guys' size with each other. Therefore, Anton should not have been there on the big fella.

"Not only that, [Jones] shouldn't have gotten to the lane. If anything, that should have been an intercepted pass, or they just catch it and heave it at the hole."

Stallings called his last timeout with 12 seconds left in regulation after Vanderbilt took a 75-74 lead on Baldwin's basket.

"All of us as coaches want to set our defense," Stallings said. "We don't want to get caught like that.

"I mean, I called timeout after we scored the previous possession. So I'm not surprised and might very well have done the same thing."

"Just five extra minutes," Bell said. "We knew fatigue was going to be a factor for them going down the stretch. They were sloppy with the ball, and we just wanted to take advantage of it."

Vanderbilt had 26 turnovers, including five in overtime. The Commodores had 22 turnovers in an 83-70 loss at Arkansas last season.

"We actually talked about that in pregame, that a lot of pressure bothers them," Bell said. "They want to come down and run their offense, have people go from A to B.

"If we just stay in the passing lanes, put pressure on the ball and not let them reverse the ball like they want to, that'll disrupt them."

Bell, a senior guard, finished two points shy of his career-high 28 points against Indiana State in the NIT two seasons ago and had the highest-scoring SEC game of his career. He raised his scoring average to 16.8 points, up from 7.9 last season.

"He had a great night," Stallings said. "He's a guy who's gotten a lot better in this program. He's just gotten better every year and is having his best year right now."