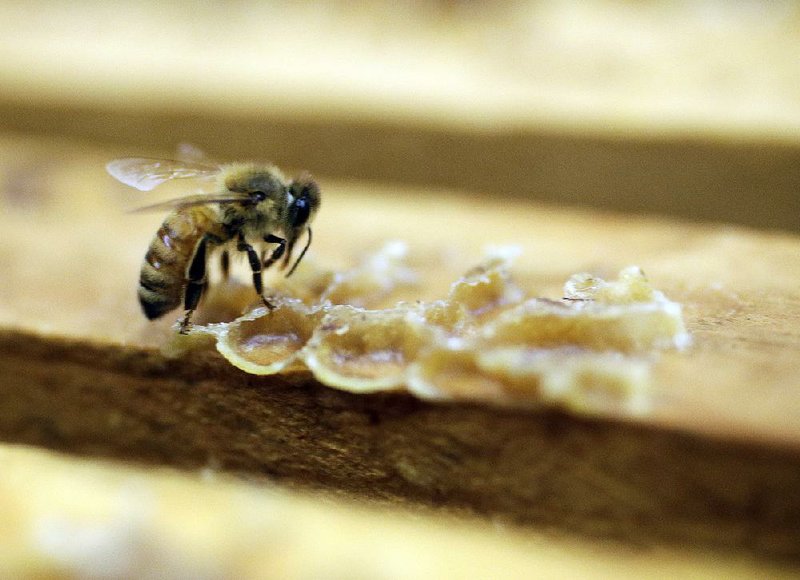 A bee works on a honeycomb at the Gene Brandi Apiary in Los Banos, Calif., in this file photo. In a preliminary report Wednesday, the EPA said the pesticide imidacloprid “shows a threat” to honeybees when used on certain crops.

The Environmental Protection Agency's announcement that a popular pesticide is harmful to honeybees when used on cotton ignores good science, a University of Arkansas entomologist said Friday.

"This flies right in the face of the research we've been doing in the mid-South," said Gus Lorenz, distinguished professor and associate head of entomology for the UA System's Division of Agriculture.

The pesticide imidacloprid, most commonly sold by Bayer under the brand name Gaucho, is the only effective seed treatment against a devastating cotton pest, Lorenz said. Insects called thrips flock to cotton when it emerges and can cause yield losses of 130 to 150 pounds per acre, Lorenz said. A bale is 500 pounds of cotton.

In extreme cases, entire fields of cotton can be wiped out, Lorenz said.

Arkansas' cotton crop, which has been declining because of falling prices, was valued at more than $243 million by the U.S. Department of Agriculture in 2014, the last year for which figures were available.

In its preliminary risk assessment issued Wednesday, the EPA said imidacloprid "shows a threat" to honeybees when its residue in cotton and citrus pollen and nectar is above 25 parts per billion. Detrimental effects include fewer bees and less honey, EPA said.

The issue is important because honeybees are crucial to the food supply: About one-third of the human diet comes from insect-pollinated plants, and the honeybee is responsible for 80 percent of that pollination.

The American Beekeeping Federation did not respond to requests for comment on Friday.

In response to Lorenz' criticism, an EPA spokesman noted Friday that the agency had not taken any action against imidacloprid. Interested parties are encouraged to express their concerns, "including critiques of the data we relied on and other data not accounted for in the assessment," during a 60-day public comment period that will start later this month, Robert Daguillard said.

EPA also plans preliminary risk assessments on three other neonics that are scheduled to be released for public comment in December.

Lorenz said he and his colleagues had planted cotton seeds treated with imidacloprid and then pulled samples at various stages of plant growth. Tests showed "fairly high levels" of the pesticide when the plants first emerged, he said. By the time the plants bloomed, and became attractive to bees, the pesticide was below the lethal level in pollen and undetectable in nectar, he said.

"We gave the data to the EPA," Lorenz said. "They are well aware of it, but they ignored it in their review and that concerns us. This is not about science. It's about politics."

He said he would raise his objections during the comment period.

Lorenz said the loss of imidacloprid would be especially alarming for Arkansas' cotton growers because 100 percent of the state's crop is infested with thrips, which feed on the plant's leaves. Thrips in Arkansas already are resistant to the other available seed treatment, sold by Syngenta under the brand name Cruiser, he said.

If imidacloprid is banned, farmers will have to use spray pesticides that put more chemicals in the environment than do seed treatments. Spraying also drives up costs for producers, he said.

Lorenz also expressed concern that a November decision by a federal court to reject the EPA's approval of the Dow AgroSciences pesticide Transform could leave the state's milo producers vulnerable to sugarcane aphids. The court ruled there wasn't sufficient evidence that Transform would not hurt bee populations, Lorenz said.

He disagreed, saying Transform had undergone a rigorous review before being approved and was less toxic than many chemicals now on the market. Transform has been used to kill tarnished plant bugs in cotton in Arkansas for several years, Lorenz said, and has been used against sugarcane aphids in milo under a temporary EPA emergency measure known as a Section 18.

The EPA's action in November means only Sivanto, a pesticide made by Bayer, is authorized for use against sugarcane aphids in milo, Lorenz said. Milo is also know as grain sorghum.

Lorenz said relying on a single pesticide was risky because sugarcane aphids, which have a life cycle of three to five days, can build resistance quickly. He said milo growers may be forced to spray more often, which again would increase the amount of chemicals in the environment and drive up production costs.

Sugarcane aphids can cause yield losses of 20 to 60 percent in milo, he said, and occasionally wipe out entire fields.

Milo growers planted about 500,000 acres in Arkansas in 2015, almost tripling the 2014 acreage, according to the UA Cooperative Extension Service.

Lorenz said the UA Division of Agriculture would apply for Section 18 approval to use Transform in controlling both sugarcane aphids in milo and tarnished plant bugs in cotton for 2016.

"We can only hope the EPA will help us out and grant us permission to use this product," Lorenz said.